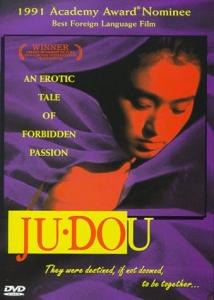 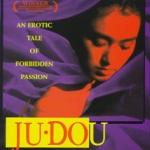 While his nephew Tian Qing is away delivering textiles from the mill to market in a nearby town, twice-widowed Jin Shan buys himself yet another bride, Ju Dou, in hopes of producing an heir to the Yang family fortune. When Jin Shan begins to torture and berate her for failing to produce a son, it soon becomes apparent that it is Jin Shan who is impotent, and that his first two wives fell victim to his sadistic sexual cruelty for their failure to conceive. Ju Dou fears that the same fate will befall her as well.

In the interim, Ju Dou discovers that Tian Qing has been spying on her through a hole in the stable wall as she bathes each morning. Ju Dou is disgusted at first with the idea of his voyeuristic invasion of her privacy, but one morning, after an especially brutal and relentless episode of torment at the hands of her sexually frustrated husband, Ju Dou, in hopes of gaining an ally, turns fully toward the peephole to reveal her burns and bruises to Tian Qing.

Treachery and vengeance ensue as Ju Dou and Tian Qing become lovers and conceive a child, much to the unknowing delight of Jin Shan who believes the baby boy is his. Ju Dou and Tian Qing hatch a plan to murder the old curmudgeon, but before they can carry it out, fate intercedes in the form of a riding accident that leaves Jin Shan paralyzed from the waist down. The Faulkner-esque dynamics created by this new turn of events sets the stage for Ju Dou and Tian Qing to exact their exquisite punishment on Jin Shan as they flaunt their lust for each other and viciously reveal that baby Tian Bai was actually fathered by Tian Qing.

However, all is not bliss as they live under the unblinking vigil of the town magistrate and his council, and must therefore keep up outward appearances. Tian Qing and Ju Dou remain mute as Jin Shan openly encourages Tian Bai to call him daddy, and he extols the glory of having fathered such a fine heir during a public celebration of the boy's third birthday.

But fate deals another blow as Jin Shan, in his makeshift wheelchair, falls into a vat of dye with the boy standing naïvely by as he drowns. After Jin Shan's funeral, in which Ju Dou and Tian Qing must participate in the traditional ceremony of forty-nine vociferous attempts to block the passage of the funeral procession, the magistrate decrees that Ju Dou must henceforth live chaste, and that for propriety's sake, Tian Qing must take up residence elsewhere.

Ju Dou and Tian Qing continue their surreptitious romantic liaison as it becomes increasingly difficult for Ju Dou to avoid conceiving another child. To further complicate matters, the boy Tian Bai, now master of the estate, grows more suspicious and disapproving of his mother's sexual escapades with each passing year, until he finally puts the kibosh on the whole affair. As with so many star-cross'd lovers, in the case of Ju Dou and Tian Qing, some things were never meant to be.

Originally banned in China for its rebellious heroine and its obvious allegorical allusions to political tyranny, Ju Dou was later released on the international film market where it garnered an award for best director at Cannes, and an Oscar nomination for Best Foreign Film. And deservedly so, as this opulent, near-Oedipal tragedy is a both a visual and a visceral masterpiece.

Gong Li is a feast for the eyes as she moves through the billowing textiles from light to shadow and back again, straining against her passions like the crude wooden gears of the ancient mill, reeling out her sexuality like bolts of silk as they slip from their pulleys into the vats of brilliantly-colored dye. Li Baotian, a scrawny and unlikely romantic lead, comes into his own as the story unfolds, and he grows increasingly convincing as the sun that rises and sets on Ju Dou's chiaroscuro world. Li Wei is perfectly cast as the bloodless misogynist we love to hate, and the boy Zheng Ji-an, who speaks no more than a dozen words, is a powerful presence throughout the film.

Ju Dou is a dark cinematic jewel worthy of enduring recognition and a place of posterity among the world's finest films.