Film Review: Of Love and Eggs 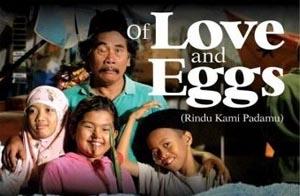 Of Love and Eggs 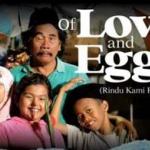 When a Jakarta neighborhood is razed by authorities, its residents are relocated to a impoverished housing area that includes a busy street market where vendors sell everything from prayer rugs to noodles. Among the residents, most of whom are Muslims living cheek by jowl in this makeshift community, are three motherless children: Bimo, Asih, and Rindu.

Bimo, a mischievous boy, spends his days rubber-stamping the eggs that his elder brother Seno sells at his market stall. Seno and Bimo have lost both their parents, leaving Seno to act as the head of the family.

Asih, a devout young girl, has been severely depressed since her mother abandoned her to flee from her abusive husband, Asih's father Beni. Nonetheless, Ashi lives in hopes of her mother's return, setting out her mother's prayer rug at services each day, even though she knows that it is considered bad luck to have a vacant spot in the line of worshipers, leaving room for the devil to take her place.

The third child, Rindu, is a deaf girl who was orphaned when the neighborhood was razed, and was adopted by Imah, a woman who has been left by husbands left Rindu's elder brother, her guardian, is away in the city and has yet to return.

Among the other residents are Pak Guru, the town cleric; Cantik, a pretty young woman who shops in the market every day; and Budi, an affable young man who often intercedes when there is family discord. Everyone knows the most intimate details of their neighbors' lives, especially within the unavoidable proximity of such cramped living conditions, but the daily dynamic of this cast of characters is one of camaraderie and concern. No matter the problem, there's always a helping hand, a supportive shoulder, a caring heart.

The story takes place on the eve of Lebaran, an Indonesian holiday that marks the end of Ramadan, the Muslim month of fasting and atonement. Lebaran is a time of feasts and parades, when it is customary to travel to one's birthplace to celebrate among family and friends. And although this community is living under the worst of conditions during this festive season, they have managed to scrape together enough donations to commission a decorative dome to sit atop their humble mosque. Their eager anticipation hangs on its arrival, along with the fulfillment of their deepest hopes and dreams.

Known in Indonesia as Rindu Kami Padamu, Of Love and Eggs is the work of Indonesian filmmaker Garin Nugroho, for which he won Best Film at the Asian and Arab Competition. And although it appears to have been made on the leanest of budgets, this factor serves to further emphasize the rampant poverty of its setting in one of the worst sectors in Jakarta. The characters of the children infuse the film with both the pathos of their predicament, and a buoyancy that transcends the depths of despair. And while its cinematic scope may be small, when it comes to story and substance, Of Love and Eggs delivers big.