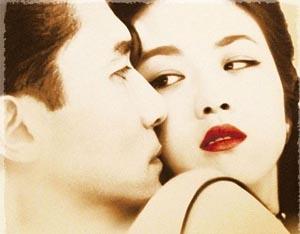 Tony Leung and and Wei Tang in Lust, Caution 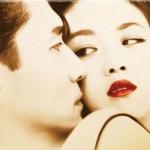 Ang Lee steps into the world of film noir with his World War II romantic thriller starring Wei Tang and Tony Leung as secret lovers on opposite sides of the Chinese-Japanese conflict: She as Wong Chia Chi, an operative for the resistance; he as Mr. Yee, a high-powered official for Wang Jingwei's occupation government. The film begins with a glimpse of its ending in 1942 Shanghai, and soon transitions back to its beginning in Hong Kong 1938, where Wong Chia Chi, a beautiful but shy young college student at Lingnan University, is enticed into auditioning for a role as the leading lady in a patriotic play staged by classmate Kuang Yu Min. A standing ovation at the play's conclusion inspires Kuang to enlist the help of his theater troupe to make a more meaningful contribution to the Chinese resistance in an elaborate plot to infiltrate the occupation government and assassinate Mr. Yee, one of its most powerful officials.

To carry out the plot, Wong Chia Chi is chosen to pose as Mrs. Mak, the wife of a wealthy businessman, which affords her access into the social circle of the government ministry wives, and an invitation to Mrs. Yee's home to join her mah jongg group. There she meets Mr. Yee himself, and under the auspices of introducing him to a reputable tailor, Wong begins a dance of seduction that she hopes will culminate in his assassination. What she can't foresee are the feelings that will inevitably develop between them, and the price they will pay for their sins.

Based on a short story by Eileen Chang and a screenplay by James Schamus, Lust, Caution is arguably Ang Lee's best work. With polished performances by cinematic veterans Tony Leung and Joan Chen, and the fresh talents of relative newcomers Wei Tang and Lee-Hom Wang, the film is as visually seductive as the promise of the intimacies that it ultimately reveals. And in those moments of forbidden intimacy, the camera is unblinking, unflinching in the capture of ravenous moments meant only for the eyes of the lovers themselves. Juxtaposed with the staid and studied faces they wear for the world, the dramatic tension draws tighter with every scene.

Known in Chinese as Se Jie, the film takes place in both Hong Kong and Shanghai, and contains dialogue in Mandarin, Japanese, English, Hindi, Shanghainese, and Cantonese. It runs long at 157 minutes, however for release in China, several of the scenes containing nudity, explicit sex, graphic violence, and an act of betrayal were cut from the film for its release in China.

Lust, Caution was submitted as Taiwan's entry for Best Foreign Language Film in the 2008 Academy Awards, but was disqualified because many of the key players are not Taiwanese. Nevertheless, the film won numerous awards elsewhere, including the Venice Film Festival's Golden Lion, top honors in seven categories at the 44th Golden Horse Awards, Best Asian Film at the 27th Hong Kong Film Awards, and a Golden Globe for Best Foreign Film.

At its core, Lust, Caution is a study in the intricacies and subtleties of both sexual intimacy and political intrigue. And for each, the question is the same: Who can you trust with your heart, and with your life?