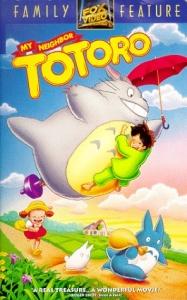 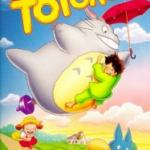 Just what is a Totoro? If you have to ask, then chances are you wouldn't be able to see one anyway, for these elusive woodland creatures can only be seen by children and young-at-heart grownups who truly believe in them. Pear-shaped, pointy-eared and endowed with magical powers, the whimsical apparitions sprang from the imagination of Japan's favorite animation filmmaker Hayao Miyazaki.

In this simple yet engaging tale, four-year-old Mei and her older sister Satsuki discover the hidden world of the Totoro when they move to the countryside with their father, Professor Kusakabe, to be near the hospital where their mother is recuperating from an illness. On the very first day, while getting settled into their rambling old country house, Satsuki and Mei catch a glimpse of things to come when they unexpectedly disturb the Mak-Kuro Kurosuke, a colony of soot sprites that live in the attic. But the acorns that mysteriously appear here and there throughout the house remain unexplained until one day, while Satsuki is at school, the curious and intrepid young Mei goes exploring in the garden, startling a pair of tiny totoro from their nest under the porch. In one of the movie's most delightful scenes, the totoro flee toward the safety of the forest, dribbling a trail of acorns from a knapsack fashioned from a handkerchief.

In an obvious homage to Alice in Wonderland, Mei tumbles down a wooded tunnel in pursuit of the tiny totoro, where she meets the big daddy of them all: a giant Totoro, the king of the forest, napping in a sunny glade. Mei curls up on his enormous tummy and falls fast asleep; but when Satsuki and her father notice she is missing and come looking for her, the giant Totoro vanishes, leaving Mei still sound asleep in the clearing.

Satsuki has her first encounter with the giant Totoro at the bus stop on a stormy night where she has come to wait for her father to return from the university. When Totoro sidles up next to her to wait for the totoro bus, Satsuki offers him an extra umbrella. Hopping up and down, Totoro uses the impact of his massive weight to rattle the raindrops from the trees for his amusement, after which he offers Satsuki a reciprocal gift of acorns wrapped in bamboo leaves.

The following day, Satsuki and Mei plant the seeds in the garden, where that same night, under a full moon and the magical influence of Totoro, a Jack-and-the-Beanstalk forest springs from the soil and ascends upwards toward the heavens. When the two girls hear the commotion and go outside to investigate, Totoro takes the two girls on a soaring spree up to the treetops and beyond the clouds. When they awake in the morning, Totoro and his looming forest are gone, but the seedlings have sprouted in the garden overnight.

Satsuki and Mei spend many afternoons helping Nanny, an old neighbor woman, with her vegetable garden. When they learn that their mother has suffered a setback in her recovery and won't be coming home for a weekend visit, Mei naïvely but resolutely sets off on her own toward the hospital with an ear of fresh corn from the garden to help restore her mother's health. Predictably, Mei gets lost along the way, and Satsuki, with the help of Totoro, launches a heroic quest to find her and bring her home safely.

For viewers accustomed to the typical American animated film, with its talking critters, anthropomorphic objects-come-to-life, and shining-hero-vanquishes-evil-villain storyline, Tonari ni Totoro may seem a little tame, saccharine even, for western tastes. But what Tonari ni Totoro lacks in laugh-a-minute fanfare and razzle-dazzle, it more than makes up for with its enchanting characters, eye-popping landscapes and quaint depiction of everyday life in rural Japan. And whether it's a close-up of hollyhocks before a gathering storm, raindrops rippling the surface of a rice paddy, the sound of a passing train, clouds floating by in a summer sky, or the microcosmic world of a snail inching its way along a blade of grass, not even the smallest detail has been left unattended.

My Neighbor Totoro, the English language version of Tonari ni Totoro, has been faithfully adapted for western audiences by director Carl Macek, with a script rendered by Greg Snegoff, who also provides the voiceover dialogue for Professor Kusakabe, the girls' father. Best of all is the irrepressible exuberance of the children's voices, with Lisa Michaelson as Satsuki, and Cheryl Chase of Rugrats fame as the voice of little Mei.

Unbeknownst to many viewers, Tonari ni Totoro also has an autobiographical element based on experiences from Miyazaki's own childhood. The setting is Tokorozawa City in Saitama Prefecture, Miyazaki's hometown; and four-year-old Mei is about the same age as Miyazaki was when his mother was hospitalized for spinal tuberculosis. No doubt there are other similarities known only to Miyazaki himself.

For all its quaintness, Hayao Miyazaki's Tonari ni Totoro is among the best that the art of animated film has to offer. And just in case the evidence isn't convincing enough already, Tonari ni Totoro was included among only a handful of Japanese films on the 100 Best Films List of the master himself, Japanese director Akira Kurosawa.

Miyazaki's other films include Nausicaä of the Valley of the Wind, Laputa Castle in the Sky, Kiki's Delivery Service, and. Princess Mononoke.