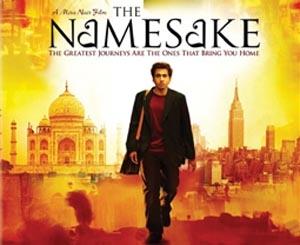 It may strike the reader as rather singular and far-fetched; but he may feel assured that it was by no means far-fetched, and that the circumstances were such that it would have been impossible to give him any other name... --Nikolai Gogol, The Overcoat (1842) 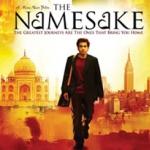 Mira Nair has outdone herself yet again with this gem of a film. Based on the 2004 novel by Pulitzer Prize winner Jhumpa Lahiri, the ensemble cast features Bollywood megastars Irrfan Khan and Tabu as Ashoke Ganguli, an fledgling engineer, and Ashima, his bride by arranged marriage; and their offspring, Gogol, played by Kal Penn, best known for his role “Harold and Kumar Go to White Castle,” and his sister Sonia, played by Sahira Nair, who also starred in two of Mira Nair's earlier films.  The Namesake spans thirty years of Ganguli family history, from the arranged marriage of Ashoke and Ashima in Calcutta and their relocation to New York City as newlyweds in 1977, to Gogol's struggle to reconcile his cultural identity as a Yale-educated architect with an undeniable sense of his Indian heritage.
The overarching theme of The Namesake lies in its title, which refers to the matter of Ashoke and Ashima choosing a name for their firstborn son. According to family and cultural tradition, a child is given both a pet name and a formal name, chosen by the maternal grandmother, a process which could take months or even years. But since hospital policy would not allow a newborn to be taken home without a name on the birth certificate, Ashoke hastily chose Gogol as his son's pet name, and Nikhil as his formal name, both of which refer to Ashoke's favorite author, Nikolai Gogol, best known for his short story, The Overcoat. An explanation is quickly dispatched in the form of a flashback, in which Ashoke, as a young man, suffers a brush with death in a train accident while reading The Overcoat. And it was because the blood-spattered book was spotted among the wreckage that Ashoke was found and rescued.
Much of Act II is spent watching Gogol floundering to find himself, whether as tourist in his parents' homeland, as a rebellious pot-smoking teenager, as the fiance of a lily-white suburbanite co-ed, as the husband of a Franco-Bengali party-girl, and as a dutiful son in the face of a family tragedy. But his biggest struggle is reconciling himself with his given name, as he vacillates between Gogol, Nikhil, and even Nick as he is called by the bridge-and-tunnel set. But for Nikhil "Gogol" Ganguli, it takes a lifetime to grow into a name.
Volumes have written on the subtleties and symbolism of The Namesake, from the metaphors embodied in the bridges that connect Queens with Manhattan, and Howrah to Calcutta; the contrast between the concrete and steel of New York, and the organic ethos of Calcutta; and the literary parallels of Lahiri's The Namesake and Gogol's Overcoat. But in the end, it was Fyodor Doestevsky who said it best: "We all came out of Gogol's overcoat."
The Namesake is available on DVD at  Amazon.com.