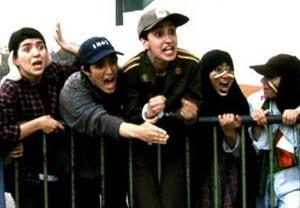 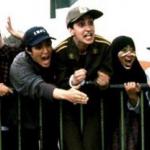 Iran is the setting and soccer is the venue for Offside, a film that centers around six young women who have defied the law of the land to attend a World Cup soccer playoff between Iran and Bahrain. Women are expressly forbidden to enter men-only sports arenas, where supposedly they would be exposed to swearing and conduct unbecoming of proper young ladies. But that doesn't stop these brazen young women, who have disguised themselves as males in hopes of getting past the guards at the gates. It is rumored that the stadium is full of similar young women, but these six have been discovered and corralled in a makeshift pen just outside the stadium walls to await disciplinary action by the Chief of Police.

Offside, a sporting term that means in a prohibited or illegal position on the field, was filmed at Azadi Stadium in Tehran and the soccer game taking place in the background is the actual 2005 playoff game in which Iran defeated Bahrain. The film stars Sima Mobarak-Shahi, Shayesteh Irani, Ayda Sadeqi, Golnaz Farmani, Mahnaz Zabihi, and Nazanin Sediq-zadeh as the six young women, whose nameless characters are identified in the credits only as First girl, Smoking girl, Soccer girl, Girl with tchador, Girl disguised as soldier, and Young girl. The guards holding them captive include Safdar Samandar as the Soldier from Azerbaijan, Mohammad Kheir-abadi as the Soldier from Mashad, and Masoud Kheymeh-kabood as the Soldier from Tehran. As the drama unfolds, the characters reveal their individual back stories in turn, and the young women match wits with the guards, challenging them to explain why Irani women are not afforded the same privileges as the women of other nationalities who come to Tehran to support their teams.

Excellent performances are delivered by a cast made up entirely of actors for whom Offside is their first and only cinematic role, and most of the interaction and dialogue between the characters takes place in the spare setting of several metal barricades arranged as a holding pen against a concrete wall next to an entryway into the stadium. Yet somehow Jafar Panahi has taken almost nothing except raw acting talent and turned it into one of his most compelling films.