Film Review: The Orphan of Anyang 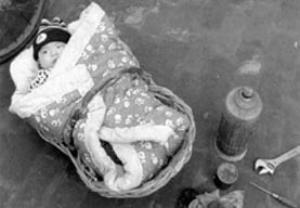 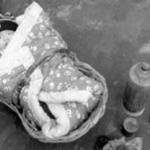 The sound of labored breathing and a bare light bulb dangling from a stark ceiling set the tone for The Orphan of Anyang, first-time director Wang Chao's sobering look at life among the disenfranchised in postmodern China. This underground film, based on a novel by the director himself, ran the gauntlet of government censorship and has now caught the eye of many a critic as it makes its way around the globe on the international film festival circuit.

The film's protagonist Dagang Yu first appears in a visual prologue, wandering aimlessly around the city of Anyang after losing his job at a bankrupt factory. At nightfall, he scrapes together the last of his pitiful assets, a handful of company meal tickets, which he trades for a fraction of their value in cash to buy himself a bowl of noodles.

At the noodle stand, the shop owner asks Dagang to hold an abandoned baby boy while he prepares the bowl of noodles. When Dagang discovers a note from the mother inside the baby's blanket offering 200 yuan per month to care for it, he asks the shop owner's permission to take the baby home. Soon thereafter, Dagang contacts the mother and arranges a meeting at squalid restaurant to collect his first installment of the child support money.

Dressed in the garish garb of a streetwalker, Yanli Feng, the child's mother unexpectedly reveals her maternal side when she fusses over the baby's well-being and questions Dagang's ability to care for him. When the two part company, with Dagang still in possession of the baby, the film segues into the life of Yanli. In the scene that follows, (one that may be lost on some viewers), Yanli is shown sending money home to her family in the rural Manchurian village of Fenggouzi.

In Anyang, Yanli's life consists of a cramped communal dormitory that she shares with several other prostitutes. She operates by means of a pager for her clients to summon her favors, and while answering the call of duty at hotel nightclub one evening, Yanli runs into her baby's father, a small-time gangster known as Boss Si-De. He's demanding, he's foul-mouthed, he's menacing, and...he's dying of leukemia. In a last ditch effort to leave something of substance behind, Si-De decides that he wants to claim the baby as his heir to carry on his family name.

Meanwhile, Dagang has set up a bicycle repair service on the sidewalk in front of his apartment, and has also developed a growing affection for both the baby and Yanli, whom he is now pressuring to quit her life of prostitution. When she reminds him that she's doing it for purely altruistic reasons, Dagang offers her the use of his apartment to turn tricks while he minds the baby. It's a cozy, if unorthodox arrangement, until Boss Si-De shows up to claim what's his.

The most powerful feature of The Orphan of Anyang is what it lacks. The film is bereft of artsy cinematography, heart-rending musical scores, thespian performances, clever dialogue, unexpected plot twists and special effects. The motionless camera fixates on each scene just a moment longer than necessary and comfortable, while the relentless cacophony of the city drones on in the background. The characters speak to each other without artifice, and the story unfolds in linear sequence. The result is an unblinking study in humanity, reduced to its most common denominator: survival.

The Orphan of Anyang - at Cinequest 12 Film Festival (San Jose, California, USA, February 23 and 25, 2002). For more information on the film and its screenings, visit the Cinequest website at www.cinequest.org.