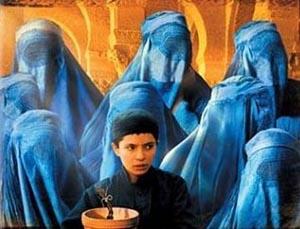 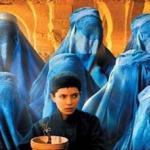 Inspired by a newspaper article, director Siddiq Barmak tells the story of a twelve-year-old Afghani girl who must disguise herself as a boy so that she can go out into the streets of Taliban-ruled Kabul without a male companion and earn a living to support her mother and grandmother. Toward this end, her mother calls in a favor from a friend of her deceased husband who was killed in the conflict. Terrified of being discovered, the situation is made worse by Espandi, a neighborhood street urchin who recognizes her and threatens to expose her. Over time however, the two children become friends and it is Espandi who renames her Osama.

For a few weeks, Osama lives a double life: boy by day, girl by night, until a Taliban cleric named Mullah Sahib conducts a round-up of all the boys in the village to train for the military. And as if her ruse weren't already risky enough, with no escape, Osama's proximity to this gathering of adolescent boys places her in even greater danger of being found out. Fortunately, Espandi is among the young recruits and helps her maintain her cover, until Osama is betrayed by her own feminine nature.

On a shoestring budget, Osama was the first film to be made in Afghanistan since the fall of the Taliban regime, and its cast were just ordinary folk that Barmak recruited from among the people he met on the streets of Kabul. The film stars Marina Golbahari in the title role, Zubaida Sahar as her mother, and Arif Herati as her friend Espandi.

Barmak received the patronage of Iranian director Mohsen Makhmalbaf in the making of Osama, including financial funding, camera equipment, and his cinematographer Ebrahim Ghafori. The film has received awards at Cannes and other film festivals all over the world, and received a Golden Globe for Best Foreign Language Film.

In this singular story, Siddiq Barmak has captured the essence of a nation in turmoil and transition. An unforgettable portrait of one girl who stands alone against a struggle once shared by every woman in Afghanistan.

Skiing in a burqua in Afghanistan...