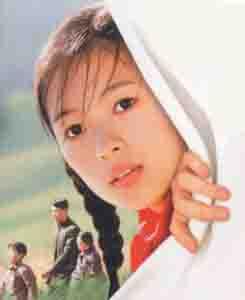 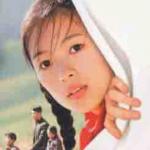 Tradition. It is the glue that holds families, and even entire cultures together. It is the tie that binds one generation to the next, and it is the foundation for a charming cinematic valentine, The Road Home.

Known in Chinese as Wo De Fu Qin Mu Qin, The Road Home is based upon a novel titled Remembrance, and is directed by Zhang Yimou, also known for his films Raise the Red Lantern, Ju Dou, Red Sorghum, Hero, and House of Flying Daggers. The Road Home stars Ziyi Zhang, who also appeared in Hero and House of Flying Daggers, but may be best known for her role in Crouching Tiger Hidden Dragon.

The story is set in the remote village of Sanhetun, China, where the aged widow Zhao Di awaits the arrival of her son Luo Yusheng from Hong Kong. He has come to help his mother with the funeral arrangements of his father, Luo Changyu, the village schoolteacher who has died of heart failure while traveling from village to village in the dead of winter, raising funds to rebuild the schoolhouse.

Chinese culture has many traditions associated with the funeral process and the honoring of departed ancestors. One of the most important traditions is ensuring that their spirits are able to find their way home in the afterlife. Therefore, the widow Zhao Di insists that the body of her husband be carried from the neighboring village where he died, along the road that leads to Sanhetun, so that his spirit does not forget the way home. Luo Changyu had devoted his life to educating the children of Sanhetun, and had died trying to ensure that his legacy would continue. He deserved nothing less.

Recognizing the futility of trying to talk her into a more practical means of transporting the body of his father, Luo Yusheng dutifully accedes to his mother's wishes. However, they face one major hurdle: There aren't enough strong young men left in the village to carry the body of his father such a long distance. So Luo Yusheng will have to hire a dozen men from a neighboring village to do the job, and provide them with food, whiskey, and chairs for resting along the way, at a cost that will empty his wallet. The widow Zhao Di also wants to weave a shroud for her husband's coffin, which will require that Luo Yusheng pay for the repair of an ancient loom for the task.

Once the funeral arrangements are set in motion, and his mother is ensconced at her loom, Luo Yusheng has a few quiet moments to look over his father's personal effects, among them a photograph of his parents, taken the year they were married. The story of their courtship was known to all in the village, and one that Luo Yusheng had heard many times over.

Until now, the story has been told in black and white. But the moment Luo Yusheng begins to reminisce, it comes alive in a burst of Technicolor, with a lovely and youthful Zhao Di waiting in a golden meadow with her fellow villagers for the arrival of the new schoolteacher. And as the most beautiful maiden in the village, Zhao Di has been assigned the task of weaving a bright red banner to hang in the new schoolhouse for good luck.

It's love at first sight for Zhao Di and Luo Changyu, although Zhao Di has had many suitors, none of whom met with her mother's approval. In the first days after Luo Changyu's arrival, Zhao Di never misses an opportunity to catch a glimpse of him. And each day, she lovingly prepares a hot meal, which she delivers to the construction site where the new schoolhouse is being built, in hopes that Luo Changyu will choose it for his lunch from among the many dishes brought by the other women of the village. It has also been decided that the new schoolteacher will dine with a different family each evening, and when Zhao Di's turn comes to have Luo Changyu for dinner, she is nearly beside herself with anticipation.

Despite her mother's misgivings that the schoolteacher is above their family's humble station in life, all seems rosy, and love blossoms between Zhao Di and Luo Changyu, until one day when Zhao Di learns that Luo Changyu must return to the city for questioning. The year is 1958. China is in the throes of political upheaval and it seems that there is some question regarding the young man's allegiances. But before he departs, Luo Changyu gives Zhao Di a tortoise-shell barrette as a token of his affection, with a promise to return in a few weeks time.

Zhao Di waits in utter despair as the day of Luo Changyu's return comes and goes with no sign of him. When she can stand it no longer, she defiantly sets out in a snowstorm to track him down in the city. One of the villagers finds her collapsed on the road and brings her back home, where she is taken deathly ill. When Luo Changyu hears the news, he returns without permission to be by her side, an act of disobedience that costs the two lovers another two years of separation. But when Luo Changyu finally returns to Sanhetun, the two are never parted again...until his death. And that is how the road to Sanhetun became a symbol of their love.

When the story finally returns to the day of Luo Changyu's funeral procession down the long road home, the unexpected turnout of mourners, and Luo Yusheng's tribute to his father the following day will surely melt even a heart of stone.

The Road Home is available on DVD and VHS at Amazon.com.