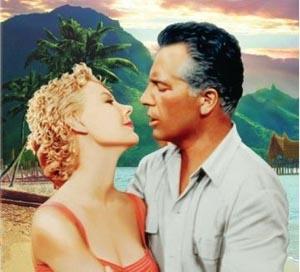 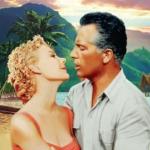 Stationed in the South Pacific in the proximity of a Japanese island stronghold, the troops involved in a secret U.S. military operation are more focused on love than war. All the sailor boys and Leathernecks are hot for Nurse Nellie, but she only has eyes for Emile De Becque, a wealthy French plantation owner. And the handsome young Lt. Joseph Cable has fallen in love at first sight on the forbidden island of Bali Hai, with Liat, the beautiful daughter of Bloody Mary, a Tonkinese islander who peddles souvenirs on the beach.

What could possibly go wrong with romance for these pretty people in this island paradise? Amazingly...Racism rears its ugly head. Nellie has an emotional meltdown when she learns that Emile is a widower who was once married to a Polynesian woman and has two young children. And although Lt. Cable is head over heels for Liat, he declares that he could not possibly marry a Tonkinese woman. But in the end, the lessons of war teach them both a thing or two about true love.

Based on the 1947 Pulitzer Prize-winning Rodgers and Hammerstein musical adaptation of James A. Michener's Tales of the South Pacific, the film version of South Pacific, starring Mitzi Gaynor and Rossano Brazzi, premiered in 1959. Juanita Hall in the role of Bloody Mary was the only cast member from the original Broadway production, and the actual singing voices of Mitzi Gaynor and Ray Walston were the only ones used. All the others were dubbed. All fourteen of the original songs from the Broadway production were included in the film, along with a fifteenth, My Girl Back Home, which had been omitted from the stage production. The song list includes such familiar favorites as Some Enchanted Evening, I'm Gonna Wash That Man Right Outta My Hair, and I'm in Love with a Wonderful Guy.

South Pacific's primary filming location was Hanalei Bay on the Hawaiian island of Kauai, however, panoramic filming also took place on Spain's Balearic Islands and on Malaysia's Tioman Island. There The fictional island of Bali Hai is also featured. But even amid these vibrant tropical settings, director Joshua Logan still felt the need to use color filters in most of the musical sequences, a decision which was the subject of much criticism, and deservedly so. Nonetheless, South Pacific was the biggest box-office earner of 1959, and the film was nominated for eight Academy Awards and two Golden Globes, including Best Picture and Best Cinematography. However its only win was the Oscar for Best Sound. To celebrate the 50th anniversary of South Pacific, a highly-successful Broadway revival opened in April, 2008.

For all its flaws, in its own inimitable way, this colorful, old-school musical still holds up over time, with an unforgettable cast of characters, and some of the most memorable songs in musical history. Watch it for the nostalgia, and for the well-intentioned lesson it teaches.