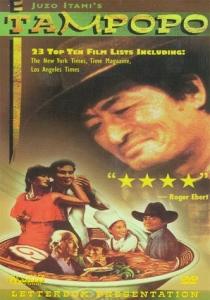 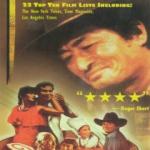 One rainy night, after too many hours on the road, listening to his sidekick tantalize him with passages from a book on the fine art of appreciating and devouring a bowl of noodles, Goro pulls over for a bowl of ramen at Tampopo's shabby little roadside restaurant. When an intoxicated diner insults Tampopo's artless cooking skills and lack of business acumen, Goro chivalrously intercedes on her behalf, only to wake up the following morning, bruised and battered from last night's brawl, but in the blissful care of Tampopo.

Over breakfast, with her impressionable son Tabo wearing Goro's cowboy hat and mimicking his every move, the trucker reluctantly but candidly critiques Tampopo's noodles. "They've got sincerity," he says. "But they lack guts." Goro gives her a crash course on the fundamentals of restaurant counter service, and just before he can exit stage left, Tampopo hornswaggles him into becoming her teacher and mentor.

With that as the film's main storyline, Tampopo and Goro embark on a quest for the perfect ramen recipe: the silkiest noodles, the savoriest broth, and just the right combination of precisely prepared toppings. As they prowl the outskirts of Tokyo, slyly querying noodle cooks, spying through cracks in kitchen walls, and snooping in restaurant garbage cans for the secrets they seek, the story takes brief excursions into the lives of miscellaneous onlookers and passers by. These wry vignettes infuse the film with a sense of humor and sometimes erotica as food becomes a motif and a metaphor for life's more profound elements.

The cameo characters attend pretentious dining etiquette lessons, fondle fruit in the supermarket, tempt an organically-fed child with ice cream, order an elaborate gourmet meal at an austere business lunch, arise from the deathbed to prepare one last dinner, and indulge in episodes of epicurean sex play that make 9 ½ Weeks look like a bowl of corn flakes.

Every scene in Tampopo is flavored with a hint of irony and, as with his other films, (which include The Funeral, A Taxing Woman, A Taxing Woman Returns, Tales of a Golden Geisha, Minbo, Last Dance, A Quiet Life, and Supermarket Woman) Itami uses his filmmaking craft to lampoon the absurdities of the Japanese way, while holding up a mirror to the foibles of human nature. Tampopo's nonpareil scenes of bon vivant vagabonds sitting around an open campfire, critiquing the gastronomic merits of the table scraps they've purloined from the dumpsters of gourmet restaurants, are at once both boldly hilarious and touchingly sardonic.

Alas, the comedic genius of the ill-fated Itami was lost to the world the day he leapt to his death from the eighth floor of his office building over tabloid allegations that he was having an affair. Nonetheless, he bequeathed a legacy of buoyant humor and unique satire to fans and film lovers around the world, and Tampopo is unequivocally his best work.

So the next time you find yourself in the supermarket, staring at those ten-for-a-dollar packages of instant ramen, get a hold of yourself and go rent Tampopo instead. Treat your soul and your senses to the real thing. Itadakimasu.