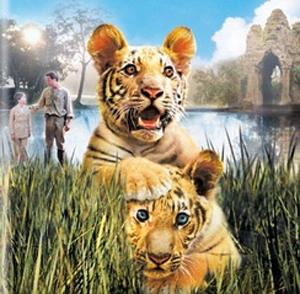 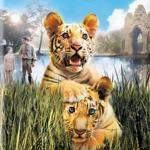 Take a walk on the wild side with Jean-Jacque Arnaud's Two Brothers, the 2004 story of two playful tiger cubs separated from their parents and each other by the intrusion of Aiden McRory, an opportunistic trader who has discovered a lucrative auction market for artifacts pillaged from the ancient temple ruins, and in his in his plundering, becomes entwined in the fate of the two tiger cubs.

Set in French Indochina in the 1930's, a region that is now Cambodia, Laos, and Vietnam, the film opens in an auction house, where Aiden McRory has entered a stone Buddha's head for bidding. When it fetches a handsome price, he heads back to further plunder the temple, which also happens to be the habitat of a family of tigers. The two cubs are roaming playfully about under the watchful eye of their father, but when McRory's crew invades their territory, the father tiger is only able to carry one of the cubs to safety, and is shot by McRory when he attacks one of his crew members in defense of the other cub. McRory adopts the orphaned tiger cub and loads him along with his plunder to head back to the village. But when McRory is arrested for the theft of the temple statues, the cub falls into the hands of the village chieftain, who in turn, sells him to a traveling circus. They name the cub Kumal.

Meanwhile, the mother tiger is still roaming about with the other cub, but when McRory traps her in a pit, the remaining cub runs back into the forest with Raoul, the young son of Administrator Eugene Normandin, in pursuit. Raoul finds the tiger cub hiding in a crevice, and begs his mother to let him keep the cub as a pet. They name him Sangha. But when the rambunctious kitten wreaks havoc in the household and attacks the family dog, Raoul's mother banishes him from the household and he is taken to the royal menagerie of the Khmer prince, where the mother tiger is also being held in captivity. On a whim, His Excellency the prince decides to take a visiting dignitary on a tiger hunt, so Sangha and the mother tiger are set free to be hunted. The mother tiger is shot, but only through the ear, and manages to escape, while Sangha is returned to the menagerie. And when His Excellency later decides to stage a public tiger fight, he sends his majordomo to buy a fighting opponent for Sangha. That tiger is none other than his brother Kumal, and now the two tigers must fight to the death.

Director Jean-Jacques Annaud is known for his work with animals in his earlier film The Bear, and for other films of note such as In the Name of the Rose, and Quest for Fire, as well as for two Asian themed films, Seven Years in Tibet, and The Lover. Also known under the French title Deux Frères, Two Brothers was filmed on location in Cambodia, and Thailand, as well as in several French film studios. Supporting cast includes Jean-Claude Dreyfus as Administrator Eugene Normandin, Philippine Leroy-Beaulieu as his wife, Freddie Highmoreas his son Raoul, Oanh Nguyen as His Excellency the Khmer prince, and Maï Anh Le as Naï-Rea, the daughter of the village chieftain. Script is primarily English, with small segments of subtitled dialogue in Thai and French. The film received a Cesar award for Best Cinematography, and a Genesis Award for Best Feature Film.

Even within the context of a time when more than 100,000 tigers roamed the jungles of Southeast Asia, Two Brothers is a harbinger of things to come for their now-dwindling species by the exploitation of man. And more visual than verbal in many scenes, Two Brothers is quick to remind us that animals speak a language all their own, yet one that we all understand: the language of raw emotion.