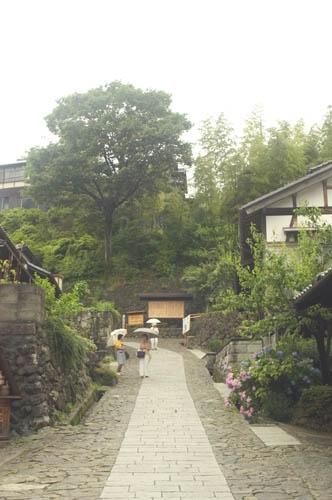 Kiso Valley, Japan: The trail leads up through "Old Magome". 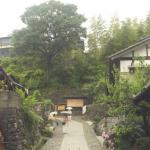 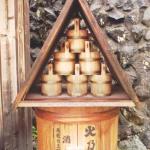 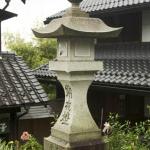 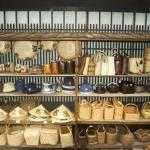 There are two kinds of rain in Japan during the month-long “rainy season” – that which never lets up, and that which seems to last forever.

On this particular day in late June, Cental Honshu’s Kiso Valley somehow managed to deliver both. As a result, the hiking trail between the centuries-old villages of Magome and Tsugamo was near-deserted.

Lufthansa hostesses Elizabeth and Gabrielle, hiking the trail during their days off in Nagoya, were rapt about the absence of other hikers. “It’s great to have the trail nearly all to ourselves”, they said. I couldn’t help making the snide remark that only Germans would hike in such atrocious conditions – but then, I was more than happy to tag along for the ride, thinking that anything would be better than spending a rainy day in a Japanese pachinko parlour.

Four hundred years ago, both Magome and Tsumago were two of 69 staging posts on the 500km Nakasendo “Highway”, a foot-trail along which local warlords had to make an annual pilgrimage to the then-capital Edo (now Tokyo), to “report in”. Just to make sure they remembered to do so, their wives and kids were kept as hostages in the capital. In the case of Gabrielle and Elizabeth, I was told that their husbands and children were back at home in Austria, awaiting their safe return.

Today, Magome and Tsumago look much as must have done in yester-century. Magome, easily accessible from Nagoya by rail and bus (see Fact File for details) has a modern part of town with a few low-key gift shops; but once you veer onto the broad foot-trail leading north through “old” Magome, it is very easy to forget that the subsequent centuries ever existed.

In the Edo era, Magome was the southernmost post town (ie a place offering room and board) in the then Kiso district. The old wooden houses along the Magome-Tsumago section of the Nakasendo trail still stand, with old inns and taverns still offering hospitality. Past Magome, the trail veers west to join the Kyoto-bound Tokaido Highway.

Magome was the birthplace of Japan’s great novelist Shimazaki Toson. His great lumbering novel Before the Dawn, set right here in the Kiso Valley, runs to over 750 pages in English. This novel is highly recommended as advance reading – try locating a copy through www.bookfinder.com.

In the eighteenth Century, the huge cypresses and umbrella pines of the Kiso Valley were regarded as such outstanding national assets that to cut down a tree was a capital offence. If you cut off a branch, you lost an arm, and so on. I could swear that my blisters after the hike must have been due to my disturbing a tree root somewhere along the way.

Even today, Japan's most venerated Shinto shrine, on the Ise peninsula, is rebuilt every 20 years using Kiso timber. Being practically-minded, the Japanese figured that the best way to save these trees for future generations and at the same time to give visitors a superb nature-lift was to preserve sections of the Kiso-ji (Kiso Road) as a walking trail. In 1976, the historic post-town of Tsumago was declared a “Protected Area for the Preservation of Traditional Buildings” by the Japanese Government.”

Some guidebooks mention a bus service from Magome to the top of the Magome-Kago Pass, which certainly (if it indeed ever runs) cuts off the uphill section of the Magome-Kumago trail. But to take this bus would be to miss out on what is arguably the most interesting section of the trail, lined as it is with old wooden farmhouses, stone shrines and rustic waterwheels. As a near-novice at hiking, I still found the whole trail not too difficult - and an added bonus from hiking the entire route is the opportunity to chill out at a sublime rest-house, at the very top of the Magome Pass.

The JR Chuo Line train from Nagoya to Nakutsagawa traverses a large swathe of the Kiso River Valley. This is a place of classic beauty – clumps of bamboo in all colours from black to yellow and lime-green dot the riverbank, while each house could have leapt off a piece of antique Japanese pottery.

From Magome Village, the trail climbs through “Old Magome”. The old houses are all picture-postcard perfect, with maybe a shrine in the front yard, or a rustic water-wheel. In contrast with the newer section of town, the souvenir shops here sell only locally-made goods, the staples of country life such as conical hats, farmers’ shoes and so forth. From the deck of the old Mina-cho Teahouse there are awesome views over the whole of the Kiso Valley.

Past Magome-juku (where the old town ends), the Magome-Tsumago trail continues to climb, passing through fragrant green forests of umbrella pine, cyprus and birch. At Jinba, a classic old waterwheel stands near the ruins of the Ichikokutochi checkpoint, which functioned from 1749 to 1869 to keep watch on the removal of timber. At the tiny settlement of Kumano, the Kurashina-soreisha Shrine stands in memory of one Shichirozae Karashina, who was murdered here way back in 1586 I couldn’t help wondering whether the police are still looking for the culprit – or why he was murdered in the first place.

“Maybe it was because he kept making people climb this steep hill!” said Elizabeth.

By the top of the trail, at the Magome Pass, the rain reaches a peak. I feel drenched, waterlogged and chilled to the marrow – even in a Japanese early summer. A bowl of steaming Soba (buckwheat noodles) soup is just what is called for, as the friendly owner of the Magome Tea-House points out in limited English the way down to Tsumago.

The second leg of the trail is downhill all the way, the track passing through denser forests than on the uphill leg. All is waterfall-fed greenery, with mosses in a hundred impossible shades of green carpeting everything that’s immovable.

Resplendent in the mists, the village of Otsumago comes as a pleasant apparition after some even more soaking downpours. Gabrielle is greeted by an old woman of the village; as it turns out, all she wants to do is to give her some plums from her garden – an act of genuine kindness that is repeated further along the path. On busy days Tsumago may be “touristy” (in the words of one or two of the guidebooks), but we all find nothing but smiles and a warm welcome.

For the last couple of kilometres, we’ve been following the course of the Kiso River. Past Otsumago village, however, the Araragi River joins the Kiso to form a raging torrent, twisting and frothing over the rocks like a rabid serpent. By the time it reaches Tsumago town, the River needs a long bridge to span its banks.

Tsumago is possibly the best-preserved of all the old post towns. In its main street, the 250-year old Matsushiroya Inn still invites visitors to stay, its welcoming lantern flickering in the twilight. The Nagiso-machi historical Museum and the old Okura dwelling-house, both constructed using heavy cypress beams, are preserved as records of the Edo period, and the whole town could have fallen off the screen of a Kurosawa movie.

Still soaked and awaiting a taxi for the 5 km trip to Nagiso rail station (the buses cease running around 3:30 pm), we stop at a tea-house for refreshments, in the form of a large pot of green tea with a bowl of Japanese canapés. The bill for the three of us comes to ¥100 (about $US 80 cents), the very kind proprietor refusing to accept any more money for all her painstaking efforts.

Touristy it may be, but the Kiso Valley still holds its time-woven magic.

Getting there: Over 15 airlines, including Northwest, Philippine Airlines, Japan Airlines and Australian Airlines fly direct from 27 world cities to Nagoya. From March 2005, flights will arrive at the new Central Japan International Airport.

From Nagoya’s main rail station, the JR Chuo Line runs regularly to Nakatsugawa Station (¥1,620 for regular service or ¥2,940 for Limited Express). From Nakatsugawa, a half-hourly bus (¥690) takes about 30 minutes to Magome. The last train from Nagiso back to Nagoya is at 7:17 pm (but the more expensive Limited Express has a later service at 8:17 pm).

For detailed rail schedules, see www.hyperdia.com , and click on the “English” option at the left of the page.

Acknowledgements: The author visited Nagoya with the kind assistance of the Japan National Tourist Organisation (JNTO) and Australian Airlines.