Foods of the Greater Syria Area: A Legacy of a Venerable Past 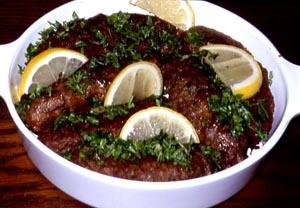 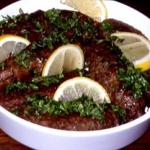 The culinary art of Syria, Lebanon, Jordan and Palestine did not develop by accident but took shape century after century as culture after culture flowed through the Middle East. These histories are documented from the misty days of early civilizations until our times. Hittites, Akkadians, Assyrians, Eblans, Egyptians, Persians, Greeks, Romans, Armenians, Byzantines Ottomans and Europeans all left traces of their foods.

The cuisines of these countries reached their epitome after the 7th century during the Umayyad and Abbasid dynasties, following the establishment of the Arab Empire. In that era, with most of the known civilized world under the domination of the Arabs, great wealth flowed into the rulers' coffers and this gave the impetus for the development of a haute cuisine. In later centuries, Mongols, Mamelukes, Ottomans and Europeans ruled for a while, then departed, enriching further the culinary art of the region.

In the Greater Syria area the great cosmopolitan cities of Aleppo and Damascus became the centres for the development of the culinary arts. The wealthy, with much leisure time, were able to create new dishes and evolve the old. Cooks in the palaces of the emirs vied with each other with their creations. Cookbooks were written, giving us glimpse into their culinary world.

Also, what helped immensely in the invention of new foods was that Damascus, along with its sister city of Aleppo, were at the western end of the wealth producing Silk Road - for some 4000 years the pathway of trade between the Far East and Europe. No less important, in the creation of both cities' affluent lifestyle, was the Frankincense Route from where the perfumes and spices brought by Arab dhows to southern Arabia were transported overland to these cities.

Memories of the exotic goods carried on these routes are to found in the souks of Damascus and Aleppo. Today, there is only one difference from the past, all the manufactured goods and foods, found in the shops, once carried by camel caravans, are now brought in by trucks and airplanes.

Due to Syria's rich history, Damascus and Aleppo developed a gourmet cuisine, not yet well known in other lands. In the ensuing centuries, other Middle Eastern cities only copied the foods of these historic urban centres. What is known today as Lebanese, Syrian, Jordanian or Palestinian food was originally developed in the kitchens of these historic cities in their days of splendour. It is said that new dishes are not created by peasants and but those with time to spare and those who had the money to experiment with new ideas.

Visitors need only enter the old quarters of Aleppo or Damascus and breath deeply the aroma of exotic spices, to feel that they are in a medieval world of action and colour - a vestige from the days when these cities were literally at the centre of the world. The labyrinth of narrow ancient streets, a bewildering mixture of people at work or on the move, artisans hand-pounding their brass, copper, iron and precious metals complement merchants offering their endless food products.

This living picture of daily activity in the medieval world is reflected in the cities' repertory of unusual recipes - many going back to the court cuisines of the past centuries. No one dining on food flavoured with pomegranate syrup, grilled meat smothered in yogurt, barbecued meatballs with black cherries or on one of the dozen of varieties of kubbah ( ground lamb mixed with burghul and spices), will forget the world-class cuisine of these cities.

Yet, in our times, if researchers were to survey the Arab restaurants in Europe and the Americas, they will find that the food they offer is known to the vast majority of their customers as Lebanese dishes. Even if virtually the same cuisine is to found in the other countries of the Greater Syria area, the world now has come to identify it as coming from the kitchens of Lebanon.

The Lebanese have been so successful at marketing their food worldwide that its Aleppo and Damascus heritage has been forgotten. In the Arabian Gulf, countries where there are thousands of restaurants owned by people from the Greater Syria area, even the Syrians and Palestinians call the food offered in their restaurants, 'Lebanese Food'.

On the other hand, no matter what the food is called or from what part of the Greater Syria area it comes, most of the dishes are healthy, nutritious, appealing and tasty. The Syrian food that I ate as child on our homestead in the western Canadian prairies such as taboula and yogurt, as well as lentil and burghul dishes, are now considered to be health food in North America.

Society has come a long way from when, as children, we munched in school our Arab Middle Eastern food, hidden away from our peers, fearful they would see us eat our sandwiches of stuffed-pickled eggplants packed in Arab bread (pita) and our 'arous bi laban' (semi-solidified yogurt rolled in thin Arabic bread in cylinder shape).

Even the usual Arab condiments and sauces for these foods, some of which were beyond our means in the Depression years, are healthy, nourishing and tasty. Garlic, lemon juice, olives, olive oil, onions, pomegranate syrup and tahini (crushed sesame seed paste), employed daily for cooking throughout most of the Arab world are some of the healthiest food enhancers known in the culinary world. Their use on the everyday menu in the Greater Syria area until our times is a testimony to their culinary attributes and healthy qualities.

These few recipes are only a minuscule sample of the Greater Syria area gourmet cuisine - today fast spreading throughout the Western world.