The Glorious Slackers of Beijing! 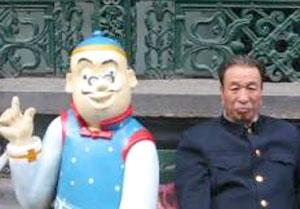 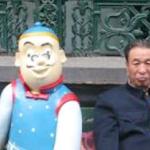 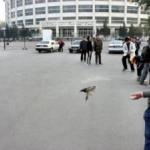 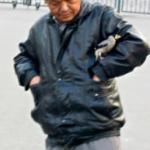 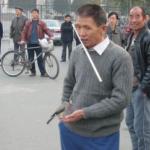 Forget what you might have heard about Beijing being a gray place, its inhabitants clad in dowdy sameness and engaged only in activities dictated by the permanent revolution. The days when the fashions and activities of China's capital were dictated by politics, when frivolity was something to be shunned and struggled against are consigned to the ash bin of history along with the cradle-to-grave security of the iron rice bowl. In today's Beijing, every park is filled with character and characters a-plenty, and even the plainest looking neighborhood is filled with color for those who know where to look. And free to waste their time the people are, as long as they don't get too carried away and threaten social stability. So waste time they do, continuously and gloriously.

Throughout the city, ancient pastimes exist side by side with newer ones. In the warmer weather, rollerbladers duck underneath kite strings in front of Worker's Stadium. In Ritan (Alter of the Sun) park, men play game after game of Chinese Chess, downing endless cups of strong Chinese tea; little about the way the tea is made or the game is played has changed for a thousand years. But just across the park a newer leisure scene is emerging, as scores of couples young and old gather nightly to practice ballroom dancing in wide-open lots to big-band music being pumped over loudspeakers. But these activities are fairly straightforward, and easy to describe. For those who care to look, the alleys and parks of Beijing abound with stranger pursuits still.

Hang out in front of Worker's Stadium in the cooler months and you'll see local hobbyists of all ages engaged in an activity best described as "bird fetching". Not a sport of men fetching birds - though this would make sense, as bird keeping has a long and honored tradition in Beijing - this activity involves training birds to snatch plastic beads in mid-flight. For the novice, this means holding the bird in one hand while throwing a brightly colored bead out in an arc with the other. If things go the way they should, the bird leaps out, grabs bead in beak, and returns to the masters hand. If things don't work smoothly, the bead hits the ground and the bird flies off, lands on a nearby gate or tree, and squawks mockingly as its master alternately hurls promises and threats.

To truly appreciate the artisan of this pursuit, watch an old master with a seasoned fetching bird. Using a blowgun-like apparatus, the expert shoots the bead up in a high-velocity arc with one hand while hurling the bird with the other. The bird becomes a blur and the bead is invisible to all but the bird's eye, and the race is on. Bird and bead race perhaps 200 yards away from the launch point until hunter catches prey in its beak and heads back for another round. At this level, bird loss isn't an issue. "Unthinkable!" One old bird-fetching hand says when asked if his bird might one day fly the coop. "He loves to fetch - he'll always come back for more. Besides, I'm his best friend in the world. His only friend, in fact."

Wander along Quianmen street, just south of Tienanmen, and you may come across a group of older gentlemen who, from a distance, appear to be particularly detail-conscious sidewalk cleaners. Come in closer, and you'll see that the long handles they wield are attached not to mops, but to large mao bi, traditional calligraphy brushes made of horsehair. These are Beijing's sidewalk calligraphers. Dipping the brushes in water, the artists walk backwards, scripting carefully crafted Chinese characters on the sidewalk, their ink, plain water. The characters form poems, stories, or chenyu, classical Chinese idioms. Beijing is a dry city, and by the time the last character has been finished, the first have already evaporated. But the authors of these short lived, beautifully crafted works simply continue walking backwards slowly down the street, creating as they go, never going back to re-read the faded works of just moments before. "The meaning of these characters is in the writing" One sidewalk scribe says. "If people wish to read them before they fade, they need to walk alongside us."

There are other diversions to be found throughout Beijing, pastimes ranging from the simple to complex. Kite flying remains popular, and can be either simple or complex depending on the hobbyist (some of whom will try to get several in the air at once). One local legend, known as "Mr. Ma the Wushu Guy", practices Wushu, one of the more graceful martial arts, with a twist - he's on in-line skates. Mr. Ma is an elusive master, and attempts to catch him on film have thus far proved fruitless. Rumor has it that he can be seen just after dawn around the north gate of the Worker's Stadium Gymnasium - look for an old man dancing around on skates and swinging a sword in slow motion.

From Longtan park in the southeast corner to way up in the wilds of the Haidan university district in the city's Northwest, Beijingers are in droves ignoring the call to toil and contribute to the world's fastest growing economy; instead, the slackers of Beijing are doing what loafers everywhere are best at: devising more and better ways to waste time. The late Chairman Deng Xiaoping is best remembered for his maxim "to get rich is glorious". But to these purveyors of leisure, slacking off can be pretty glorious too.