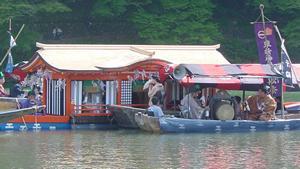 Floats on the river at Kyoto's Aoi Festival 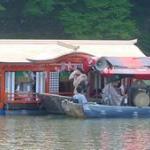 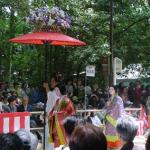 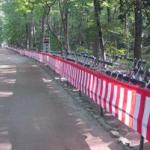 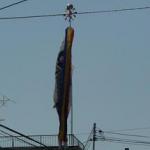 I am a sucker for a good festival. After 11 months in Japan, my interest in seeing them has not lessened at all. I try to see them all. I especially enjoy the ones that have a little original flair that gives them their own unique beauty and meaning.

May is a month packed with festivals. The first week of May is called Golden Week because there are three national holidays in the first week. The first is the former emperor's birthday celebrated on April 29th. On May 3rd it is Constitution Day, the day that the modern democratic constitution was accepted after World War II. It is a British Parliamentary system. Also there is National Boys' Day celebrated on the 5th. This is a day when young boys are honored. Don't worry, girls have their day too, on March 3rd. In addition to these, Kyoto City celebrates one of its three largest festivals on May 15th, the Aoi Festival. There are also some other minor festivals.

Most people have the entire week off, and since Japan is one of the most densely populated places on earth, when everyone decides to travel at the same time, things can get quite hectic. For a variety of reasons I opted out of the mayhem and stayed in Kyoto that week. The one time that I ventured down to the train station to catch a local bus, I was glad that I hadn't gone anywhere, as it was a madhouse there. Anyway there were plenty of things to do in Kyoto.

I really didn't notice too much in the way of public celebration for the former emperor's birthday except that it was a part of the week off. The same was true for Constitution Day. National Boys' Day is celebrated by those families that have boys. They fly giant fish kites on top of their houses, tied to trees, or in doorways. The carp is a Chinese lucky symbol for success in life. In the house, the family displays special samurai dolls. (The girls also have their own special dolls on Girls' Day). In addition there are special sweet treats that are served. I wasn't lucky enough to get invited to see a doll display or get to eat the special foods, but I did see a lot of carps floating around.

About the same time as Boys' Day, Kyoto was gearing up for the Aoi Festival with preliminary festivals. The most impressive one occurred at Shimogamo Shrine, just three minutes walk from where I work. It is one of the oldest Shrines in Kyoto and is famous because of its sprawling grounds. There they have a special kind of horse race. There are two teams, red and black, and they take turns galloping down a 500-meter track. As they ride, they have to shoot at three targets. It is an amazing feat. I think it is amazing just to be able to gallop on a horse. But imagine doing it without holding on because your hands are busy with a bow. And with all that going on, imagine hitting the target as you ride. A few riders hit all three, and only one rider fell off. In the end the red team won, which means it will be a good year for the farmers, and a so-so year for the fishermen.

The Aoi festival is celebrated on the 15th of May. The Aoi festival is said to be the oldest celebrated festival in the world. I guess it depends on how you define festival and celebrate, but in any event, it is very old. It started in the 6th century with Emperor Kinmei. It is said that there had been terrible storms that year and generally the country was in bad times. The Emperor got together with his most sacred priests and they decided that it was due to the fact the gods were angry because the people were not appreciative of all they had been given. So they had a big festival and made a huge offering to the gods. And guess what? It worked. Things got better. Maybe they would have anyway, but if something works, don't change it. So, 1500 years later they are still doing it. They have been very careful not to change anything (that might ruin their luck) so now it is like a window into the past. You can see what kind of clothes, vehicles, and hats (they wore the funniest hats) were used back then. There is a kind of queen of the parade who rides in one of the main carriages (back when the parade began it was always a princess.) She wears the imperial robes, which is 12 layers of very beautiful and expensive kimonos. Luckily for her it wasn't too hot that day.

As if all this isn't enough, there is one faction of Japanese Buddhists that celebrate Buddha's birthday on the full moon day in May. Of course I had to go to that too. I ended up staying all night.

The last festival I saw was on May 20. It is called the Mifune Festival. It means three boats. Actually there were more than three boats, there were about 30 of them, each full of people wearing beautiful outfits from ancient times. In a few of the boats, there were "royalty," people dressed like the emperor and his court. Many of the boats have entertainers in them. There were musicians, singers, and dancers. They traveled up and down the river and played for the people who sat on the banks, and for the "royalty" in the boats. The nicest thing about it for me was that the royalty would often lay their fans on the surface of the river and they would float away. It was good luck if one of the fans floated your way and you were able to pick it up. I watched as the princess laid her fan down and then she looked up and smiled. Was she smiling at me? Would the fan come to me? Our lives are like fans floating on a river. Delicate, sometimes turbulent, free to roam but only where the currents will take them. And where does the river end? I wondered as I watched the fan float.