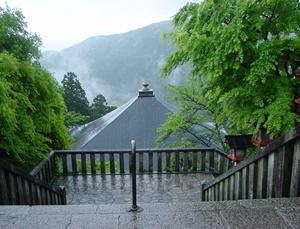 A view from Kurama Temple 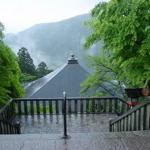 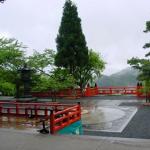 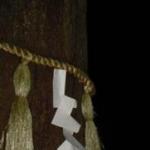 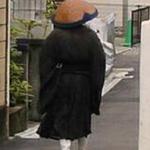 Monday, May 7th was an amazing day for me. It was Buddha's birthday, and it started out in an amazing way. I had seen the begging monks before. They wore long black robes and wooden sandals. On each of their heads was a large, finely woven straw hat shaped like huge bowl. It looked like one of those Chinese hats. It would be good if you turned it over and filled it with popcorn. They came by my workplace about once a week it seemed, though never on a schedule. They always came early.

I had gotten into the habit of arriving at work early so that I could get some work done before the frenzy of kids and staff started. The monks walked up and down the narrow streets, passing every house, all the while loudly chanting, "How." They make no effort to sing together or on the same note, so if you listen to it musically, it can be quite interesting. At lunch one day I asked my Japanese colleagues about the monks.

"Oh those are monks-in-training. Did you give them some money?"

"No. I just looked at them. Do they want money?"

"Yes. They will accept anything that you give them. It is part of their training to be humble. Many of the monks have to do that for years."

So that morning when I heard them chanting outside I hurried to the door, reaching into my pocket as I went, and pulled out a fistful of coins. After picking out the big ones I stepped outside. As one of the monks walked by, he looked up and saw me. I didn't motion to him but somehow he knew that I had something to give him. He glided over as if being drawn by a large magnet and pulled on his outer robe. It revealed an apron with a large pocket. I dropped the coins onto the apron, he lifted it up and they slid into the pocket.

He didn't look at what I put on the apron. After I did it he bowed deeply twice. I looked at him and felt his profound respect for me as a human being. A deep reverence. Did I deserve this deep respect? I did. I felt honored. He had honored me. He bowed again deeply. How did he do that without losing his hat? Then he spun around and walked away chanting. I watched him until he turned the corner.

He looked very different from the monks in training that I had seen on the streets. He spoke English quite well because, as he explained, before he became a monk he had worked with a travel agency and often had to speak English on the job. Then when he turned 50, he had decided to become a monk. He left his wife and family and found a teacher. After "hanging out" with his teacher for two years, he became an ordained monk.

He had a shaved head and wore the plain pajama-like suit of a monk, but he was unconventional in every sense. He belonged to no temple and explained that, though he cherished the teachings of Buddhism, he had nothing but scorn for the way that it was practiced in Japan. He felt it was a business and that too many of the priests never practiced the teachings that they were supposed to be masters of. Instead they led an easy life, supported mostly by funeral charges. The charge for a funeral in Japan is high, as much as 6000 dollars. Not bad for a few hours work. Many of the priests drive fancy cars and live a very comfortable life indeed. My friend called himself a freelance monk and I think he was really serious about Buddhism. For him, life was "practicing Buddhism."

"Life is my dojo," he said with a grin. A dojo is a word that is usually reserved for a place where people go to practice martial arts.

"Go placidly in the midst of praise and blame." It all sounded good to me, but only because of the twinkle in his eye and his open friendly manner. He said he supported himself by teaching massage and reiki, a kind of Japanese massage that doesn't actually involve touching. Reiki originated near Kyoto on the top of Mount Kurama. Which is also where the Buddha's Birthday celebration was held.

It was a rainy day, so I didn't know if I wanted to go. But it seemed to clear up around 6 p.m. so, along with about 15 of his other students, I met the priest at Kurama station, 30 minutes north of Kyoto by slow train. Just as we stepped off the train, the full moon struggled through the clouds and we got a clear glimpse of it. It seemed to be the only patch of sky that wasn't covered in clouds.

"You see, everyone. We are lucky," the priest proclaimed. We started the long hike up the mountain. Kurama temple sits near the top of Mount Kurama. It's about a 30-minute hike up. All along the way there are small temples, shrines, and fountains to keep you interested. The scenery is beautiful. At one point we passed a huge old tree. It was a holy tree we were told. It had a thick rope as big as your thigh tied around it. All of the Reiki students gathered around it, touched the tree with their palms, and closed their eyes.

"Do you feel the power of the tree?" the teacher asked. I held my hands out with everyone else, waiting for something to happen. The students nodded that they did. I felt nothing, but I didn't feel like I needed to tell everyone that.

We finally reached the top, sweating and out of breath. There were about 500 people sitting on the ground in a circle around a big mandala. They were meditating and each had a candle in a little glass cup. I walked over and got one of the many candles that were lined up along the temple and sat with the others. I tried to meditate with the others but I wasn't too successful. Mostly I was sleepy. I walked around for a while listening to the sounds and enjoying the beautiful rugged mountain scenery. Around 10 p.m., there was a formal service with chanting and prayers. There were some monks from other countries such as Sri Lanka and Thailand who had come to be there for this event. They gave prayers as well.

After about 20 minutes, the service ended and most of the people went to one of the buildings near the temple. It looked like a small building, but it was built into the mountain, so it went down four levels. The priests were handing out free tea and sweet rolls. I gratefully accepted two (I had forgotten to eat dinner and there were no convenience stores in Kurama!) and followed the people down. On the lower levels there were huge tatami-floored rooms where people were sleeping. It was like a big party. I thought about joining them but then I decided I would rather enjoy the beauty of nature and sleep outside.

I found a quiet place under one of the temple eves and spread out my sleeping bag. I put my candle down by my head so that no one would step on me. I had a great view of the mountains and the moon when it decided to appear. Around 12 a.m., I was awakened by the start of the second service. I thought about getting up for a few seconds and then drifted happily back to sleep. Again I heard sounds and singing. I looked at my watch. 3 a.m. The 3 a.m. service. Again I thought about getting up. I really did. Maybe all this supernatural stuff wasn't for me. I didn't really feel anything special about this night or this place other than that it was a beautiful place to be.

I've been waking up early these days, with the sun. That day was no exception. I opened my eyes and lay there motionless. I could see that the sky was getting light. I saw my candle still burning. Then a strange thing happened. As I looked at the candle and my brain started to register thoughts, I watched the candle go out. It had burned all night beside me. Then, as I awoke, it went out. Whoa. That made me wonder.

I got up, put my things together and walked around a bit. Most everyone was still sleeping. It was 5 am. I walked over to the temple, sat down and started to meditate.

Beginning Buddhist meditation usually centers on trying to quiet the mind. Most of us keep up a constant internal dialogue that we are not even aware of. The Buddhists feel that this constant thinking about things keeps us from really experiencing life directly, because we aren't really paying attention to what's happening, to our reactions to what's happening, and to our thoughts about what's happening.

Did you ever try to still your mind? Well, take my word for it, its not easy. I spend 99.9% of my meditation time spaced out, not even remembering what I was thinking about. A teacher once told me that your beginner's mind is like a spoiled child. Still I keep trying to meditate, if only for a few minutes a day. So I sat down and started to meditate.

Amazingly, I had the most wonderful meditation I've ever had. Nothing weird happened. I didn't have a vision or anything. It just that for the almost the entire 30 minutes, I was really aware. I just sat and watched my mind go from here to there, then back to my breath. It was great. It was like watching a movie but I was the movie. Maybe it would be a boring movie for you to watch me, Frank Lev, sitting on a mountain watching his thoughts. But for me, it was fascinating. Since then, however, my meditations have returned to their normal, dismal, spacing-out sessions.

Around 6:30 a.m., I walked down the mountain and took the train back to Kyoto. Then I went to work. People said I looked very calm and happy. Maybe there was something special about that mountain and that day after all. I just had to find it in my own way.