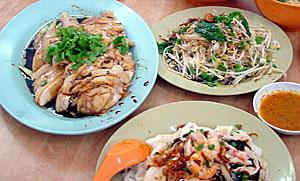 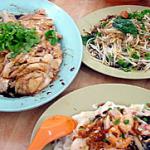 In this continuing article, I will now bring you on a gourmet expedition to Ipoh New Town. My previous article was on Ipoh Old Town.

If you are a big fan of dim sum, then waste no time and head directly to No. 2, Jalan Dato Tahwil Azar (used to be known as the Ozbourne Street; taxi drivers will know the name) for the best Dim Sum you will ever have. The name of the shop is Restaurant Foh San. This place is so famous that you can now get their frozen foods in most major supermarkets across Malaysia. But of course, nothing compares to the experience of eating in the establishment itself. While it might not have the legacy that spans a few decades like those in Ipoh Old Town, yet it has been around for at least a decade or more.

Be warned that if you go later than 8:00 a.m., you might find it impossible to get a place to seat, and that's on a weekday mind you! Although the restaurant's floor space is pretty big and the tables are aplenty, yet it is still almost impossible getting a table if you are late. So bustling is the place that you will also need a certain amount of patience to eat here, as the waitresses are so busy that you may sometimes need to self-serve. Also, during Mooncake Festival which falls in the month of September each year, the restaurant's signature mooncakes are a must-try. Prices are also reasonable!

It is actually a culture by itself to be seen eating at Restaurant Foh San. For many years, the older folks enjoy an early morning walk and would later head over to the restaurant for their morning cup of Chinese tea, then take a bite or two of the delicious dim sum, and for some, a long puff at their cigarettes or pipes. Despite the mad bustle around them, the older generation seemed oblivious to their surroundings as they enjoy their food and a good chat with their family or friends. Many could while away a few hours just by drinking Chinese tea. And not surprising, many of them also frequent the restaurant on a daily basis. It has become a ritualistic past-time for these folks.

While Restaurant Foh San is the place to head to for breakfast, this other restaurant located near to Foh San is the place to go to if you are feeling hungry at night. Restaurant Lou Wong Tauge Ayam Kuetiau at No. 49 Jalan Yau Tat Shin is a restaurant that is open from evenings till the wee hours of the morning only. It is usually a place people will go to for supper after a night of partying. They serve the infamous Perak kuey teow noodles that promise to make the rest of the noodles from other parts of the country pale in comparison. It is served with an accompaniment of steamed chicken and bean sprouts in soy sauce. It is also known as "Ngar Choi Kai" to the locals and you would not have visited Ipoh till you have feasted on this meal.

Just next door to Restaurant Lou Wong is a shop that sells an assortment of Chinese biscuits as well as the famous Tambun Pomelo that you can buy for yourself, friends and relatives. In fact if you walk around the area you will chance upon many more of such shops that will offer you very competitive prices. Just be ready to haggle a tad bit. While such shops exist in other states in the country, Ipoh is where it all began - so you are actually at the core of where this trade started.

Pusing Public Seafood Restaurant is another popular spot for people holding Chinese weddings and birthdays. It is located at 57-65 Jalan Verasamy (Verasamy Street). Of course, you may also eat there without celebrations of sorts. Just be aware that it might get quite noisy on weekends as there will be wedding dinners held there. Safer bet would be on weekdays but usually there would be some form of event at the restaurant as well. The food is on the pricey side but well worth the visit. Remember to try their signature prawn dish known as the Kou Hai. The rest of the fare is pretty good as well but of course, don't forget the prawns!

Let me share a personal and amusing incident which took place at Pusing Public Seafood Restaurant. I had one of my wedding dinners at Pusing Public. I said "one of" because I had two. One was held at my hometown which is in Kuala Lumpur and the second one was held at Pusing Public in Ipoh, because the man I am married to hails from Ipoh. As a city girl, I am used to seeing restaurants (especially those in which a wedding dinner is held) as highly civilized places. It is not a place that strangers would wander in by mistake. Amusingly, at my wedding at Pusing Public, halfway through the dinner, a man walked in and came to the main table and offered to sell us lottery tickets. I had a good laugh as these lottery ticket sellers normally solicit around coffee shops only. Apparently, as I was later informed, that it is a trend for incidents like these to take place at smaller locale. There were even people trying to sell us evening editions of newspapers!!!

Okay, enough of that. Moving along to the next destination - Near to SRJK (C) Sam Tet (Sam Tet Chinese Primary School) and St. Michael's Church is an old cinema called Odean which was later converted into a night club named Rainbow City. Most people call this landmark either the Old Odean or Rainbow City. Now it has been taken over by another night club known as Kargo, although I'm not too sure if it is still open or recently closed down. This particular place has a long stretch of hawker stalls that have a large variety of food to choose from. They are open mostly at night but there are some that are opened even from noon. One particular stall that I am very fond of is Stall No. 14 named Hup Heng. There is an opening not too far from this stall that allows you to park your car at the back of the stall (for a small fee of course). You can have your meals under the shady coolness of the tall bamboo trees swaying in the gentle breeze and a big old tree that shelters you from the equatorial heat and humidity of Malaysia. Even on the hottest days, eating here is a cooling and comfortable experience. Hup Heng serves Chinese dishes like sweet and sour pork, bitter gourd with chicken in black bean sauce, hot-plate tofu and a whole lot more, served appropriately with rice. So far everything I have tried has yet to disappoint! Oh, and not forgetting, the bill will bring a smile to your face.

Speaking of bill, you will soon notice a trend. Food is very cheap in Ipoh. Compared to Kuala Lumpur, you will find a dip of 30 to 40%, so eat your hearts out with no worries!

Next: What's yummy at Ipoh Garden South and Canning Garden?