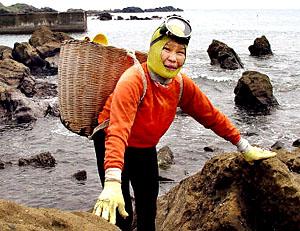 Kotoyo Motohashi, 68, Japan's legendary 'Ama' woman shellfish diver, smiles at a sea shore in Shirahama city, 100km southeast of Tokyo. Motohashi has been diving without tanks since the age of 18. 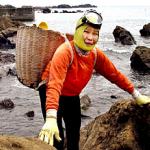 SHIRAHAMA, Japan, June 15, 2003 - Japan's legendary ama women shellfish divers, immortalised on stamps and in the 1967 James Bond film "You Only Live Twice", have grown older and their numbers have declined but they still enjoy their work and earn enough to carry on.

Her face tanned from a lifetime outdoors, Kotoyo Motohashi, 68, has been diving without oxygen tanks since the age of 18 and is the oldest shellfish diver in Shirahama's Nojimazaki district on the tip of the Boso Peninsula, 100 kilometres (62 miles) southeast of Tokyo.

In the past she shared her amagoya or divers' hut with four or five other women during the season for collecting abalone, which fetch 4,400 yen (37 dollars) a kilogram or 17 dollars a pound in the nearby Shirahama cooperative, but cost double that on a Tokyo restaurant table. "I never dive alone. I go with a group of friends who go straight from their homes and we meet opposite the Nojimazaki lighthouse," Motohashi told AFP in a recent interview as she warmed herself by a brazier.

When she started as an ama -- woman of the sea in Japanese -- Motohashi only harvested tengusa, a type of red seaweed, and sazae sea snails which are highly prized in Japan. But she quickly graduated to diving deeper in search of abalone hidden in clefts in the rocks amid the forests of kelp.

The ama themselves were considered a good catch. "As I was a very good shellfish diver, I very soon started to get marriage proposals. I was 20 when I married the son of a wealthy farming family," Motohashi said.

In 1965, a good ama could earn the equivalent of 10 million yen (84,750 dollars) in today's money for a season's work, from April to September, one month longer than the season these days, said Osashi Matsumoto, head of the Shirahama cooperative. At the time, there were about 1,500 active ama in the Shirahama area, whereas today, in a town of 6,300, the shellfish divers number just 300, 50 of whom are men. The average age of the women is 67, with the youngest aged 50 and the oldest about 85, Matsumoto said. "In my day out of a class of 40 schoolchildren, 15 of them would become ama," Motohashi said.

Diving for shellfish has traditionally been women's work in Japan for around 1,500 years since "they can withstand the cold better than men because of the different distribution of fat under the skin," Matsumoto said.

Even though they dress unglamourously to dive, the women are self-possessed and cheerfully unabashed, and think nothing of leaving the hut door wide open as they chat and shower salt off their naked upper bodies after a dive. "It's definitely the women who are in charge around here, and it's always been like that because in the old days the men used to go away on merchant ships or with the tuna fishing fleet," said Matsumoto, the cooperative chief.

"Young women today don't like the sea as much as we do, they lack courage and don't want to get their skin darkened by working in the water or the fields," said Motohashi, lamenting the lack of followers in her wake.

Shirahama's ama still earn at least 100,000 yen in the May to September season, with the best divers making around three million yen, a substantial extra income for these women whose main livelihood these days is farming rice, soya, broad beans and flowers.

Collecting abalone is hard work. Equipped with a long stick, the divers go down about 8-10 metres (26-33 feet), either diving from small boats or swimming out from the beach, and only have as long as their breath holds -- about one minute 20 seconds -- to prise the molluscs from the rocks. The youngest of the ama stay in the water for up to four hours a day, resting and chatting with friends on a floating wooden box.

Around Shirahama, 90 percent of the catch is made by divers, according to Matsumoto from the cooperative. "The abalone is considered the best in Japan because of its size and flavour. This type of fishing will withstand foreign competition as long as the customers are prepared to pay for such quality," he said, explaining that the cooperative was trying to increase its resources by releasing abalone eggs into the sea.

However, the ama do not just continue to dive for the money which allowed some of them such as Motohashi to raise two children alone after separating from her husband when she was 29. She does it "because it does me good," she said. For Sanae Kiso, 56, who has been diving since she was 17, "the secret to carrying on is that you enjoy doing it. I love the sea and spending time with my friends," she said.