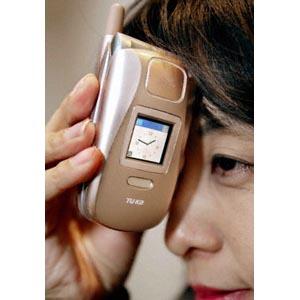 Sanyo employee Rie Uchiyama puts on her forehead a mobile phone equipped with bone conduction 'Sonic Speaker' which transmit sounds with vibrations via the skull instead of using the eardrum. 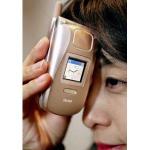 TOKYO, Jan 21, 2004 - Japanese telecom carriers, pioneers of Internet-capable and picture-snapping handsets, have now come up with the world's first mobile phone that enables users to listen to calls inside their heads -- by conducting sound through bone.

The TS41 handset, manufactured by electronics firm Sanyo, was put on sale by the Tu-Ka cellphone group this month, drawing healthy demand from customers who want to hear calls better in busy streets and other noisy places. The new phone is equipped with a "Sonic Speaker" which transmits sounds through vibrations that move from the skull to the cochlea in the inner ear, instead of relying on the usual method of sound hitting the outer eardrum.

With the new handset, the key to better hearing in a noisy situation is to plug your ears to prevent outside noise from drowning out bone-conducted sounds. If the user holds the handset to the top of the head, the back of the head, cheekbone or jaw and plugs his or her left ear, the call will be heard internally on the left side. It is the first time that the bone conduction has been used in cellphones although the technology has been available for fixed-line phones in Japan, mostly for elderly people, for the past two years.

The Tu-Ka group has launched a major advertising campaign for the new cellphone, featuring a young woman and a X-ray image of her skull using the handset. A spokesman at Tu-Ka Cellular Tokyo said it was too early to declare the TS41 a success, but retail store clerks said they were seeing a healthy demand for it. "We have lots of inquires from young women thanks to the television commercial," said Tomoyuki Harasawa, a sales consultant at a Bic Camera consumer electronics store in Yurakucho, central Tokyo.

"The actual buyers are mostly businessmen in their 30s and 40s," Harasawa said. "We sell four to five TS41s a day, a good figure for Tu-Ka, which lags far behind rival mobile operators" such as DoCoMo and Vodafone.

The cellphone is priced at 7,800 yen (73 dollars) each at the discount store. "I don't know if this is going to be a big hit, but it will be possible for Tu-Ka to raise its market share since this high-profile handset has improved its brand recognition among consumers," Harasawa said.

Tu-Ka firms belong to Japan's second largest telecom carrier, KDDI group. But Tu-Ka subscribers account for only a small percentage of the market, far less than the roughly 20 percent for the "au" brand in the same KDDI group and the more than 50 percent for industry leader DoCoMo.

Customers who examined the new phone on the Bic Camera sales floor had mixed reactions. Masaya Iwata, a 31-year-old accountant, said the product was interesting but he was not sure if he would buy it because he uses his mobile less and less for talking. "I use my mobile for picture-taking and e-mailing rather than having conversations," he said.

Japan's top mobile phone carrier NTT DoCoMo launched "i-mode" phones in February 1999, offering Internet surfing, e-mailing and video watching on mobile handsets. And J-Phone, now rebranded Vodafone to underline that it is controlled by the British-based telecoms giant, launched picture-taking handsets in November 2000. Nearly every new mobile handset in Japan now has a built-in digital camera enabling users to send images taken with their mobiles via e-mail to other handsets or computers.

Tomohiro Abukawa, a 34-year-old hair stylist, said he liked the bone-conducting phone, noting railway stations and streets were often too noisy to talk. "I may get this as it is also small," he said. But one woman in her 20s said she found the phone "scary." "Isn't this bad for your health?" she asked. Another woman, in her 30s, said she was interested in the cellphone but was self-conscious. "What troubles me is that I may look weird if I'm talking with the phone pressed between my eyebrows," she said.