Legs and Labia: The Sculpture of Luo Xu 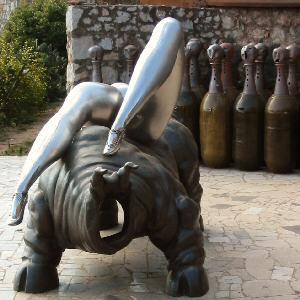 Walking through the front gate of Luo Xu's sprawling estate, located 15 KM south of Kunming, in Southern China, the first face I see is that of a dour porcelain god, arms outstretched, holding what looks to be two rounded hammers (or perhaps they're Tibetan prayer wheels) in welcome. Except for the artist himself, this is one of the few masculine figures I am to encounter on my visit. Behind the god-totem is the metal torso of a woman lying on her back in a pool of water. The woman is sans arms and head, and her vaginal lips run from navel to neck. This theme - female anatomy - runs through much of Luo Xu's work.

In the courtyard stands a two story high tower made of extended female legs, a veritable vertical chorus line; only this line exists from the waist down only, and is frozen forever in mid-kick. "The Ninety-ninth wave," perhaps the artist's most controversial work, depicts a score of headless female torsos with exaggerated enflamed sexes, prostrate and crawling towards an alter upon which a milk white body lies giving birth to a grasping outstretched ebony forearm.

I can only imagine how my mother, a psychologist whose bookshelf is filled with the works of such old-school feminist writers as Betty Friedan and Simone De Beauvoir, might analyze the creator of a series of sculptures that portray women only as an endless procession of legs and vaginas. She might call the work perverse, even misogynistic.

I bring this up to Luo Xu, who nods thoughtfully. He has clearly heard this analysis before.

"My images are not meant to convey any sense of misogyny. Indeed, my feelings are quite the opposite. I am infatuated with the female form, not only because I am a man of sound mind and body, but because I see the female form as the beginning of all things."

Born in Yunnan province sometime in 1956 (he does not know the exact date), a brief glance at Luo Xu's early resume gives little indication of the career or body of work that would eventually follow. His earliest ambition was to be an architect, a dream he abandoned. "I had no mind for calculus," he says. At 23, Luo Xu began studying painting, but his early attempts to get into art school ended in a string of rejections. Seeking a career change, he left the porcelain factory he'd been working in and went into business for himself, breeding longhaired rabbits. This vocation, too, was short lived. "All the rabbits died," he says. Throughout, he continued painting and dabbling in sculpture.

In 1988, the fledgling artist's work caught the attention of respected sculptor Qian Shaowu (whose famous ten meter high sculpture of Dr. Sun Yat Sen sits in Shenzhen's Zhongshan park). Luo Xu decided to move to Shanghai to study at the master's feet, and it was under his tutelage that he learned to sculpt the contours and nuances of the human body. In 1992, Luo Xu completed his studies, and, bucking the artistic gravity of Shanghai and Beijing, returned to Yunnan province to continue his work. In 1996, armed with a bamboo pole and a bank loan, Luo Xu began construction of the sprawling artistic estate just outside of Kunming. The estate would eventually become known as "the Aboriginal Nest".

It is here that Luo Xu lives and works among his creations. Even his home is a work of art, an embodiment of the artist's professed wish to return to the womb. From the outside, the building resembles a pair of vertical stone breasts, complete with red brick window frames. From the inside, with it's gently curving stone walls that end in a hollow, Plexiglas covered tube that stretches skyward, the effect is indeed womblike.

The estate, which encompasses his workspace and numerous galleries, draws visitors from the art communities of Beijing, Shanghai and beyond. Beijing based curator and noted art critic Carol Lu calls Luo Xu's work "full of the kind of mystery typical of witchcraft."

"It's not obscene at all." She says, "It's very unique to China. We need more artists like him."

Luo Xu contends that the idea that his work could ever be considered obscene is ridiculous. "How can this be obscene?" States the artist "Woman is the gate from which all life emerges. You, me, even the Buddha...we are all borne of woman."

The Aboriginal Nest is located ten kilometers south of Kunming City, on the road that leads to the Stone Forest. The artist entertains visitors by appointment. Please contact him directly at 13888749219.