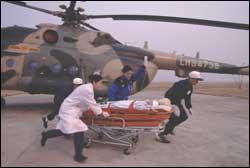 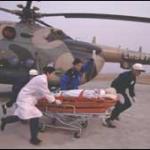 Whether on business or pleasure the wise traveler to exotic lands should prepare for all conceivable contingencies; fortune, after all, favors the prepared. But dame fate is never a more capricious mistress than when she's on the road, and sensible preparations (like a bag full of over-the-counter remedies and the numbers of local hospitals) can prove woefully inadequate when serious medical emergency rears its head in a far-off land. Sometimes you need to call in the specialists.

Meet the medical escorts, anything but your average MDs. Like Harry Dean Stanton's character in the movie Repo Man, these specially trained medical professionals spend their professional lives getting into tense situations. Their job description includes traveling to remote locales on a moments notice, first aid on the fly, re-assuring panicking patients far from home and dealing diplomatically with local doctors and officials when ego is on the line.

Doctor Ahmed Fahmy is one of three in-house doctors for the Hong Kong of International SOS, the largest global organization specializing in medical evacuations. Fahmy traded in the life of a Parisian GP to join the company in 1995. It would be a journalistic standard to begin his story with a "typical day on the job" description. But according to Fahmy, for a medical escort this would be impossible.

"A typical day does not exist on this job," says the handsome Parisian, flashing a boyish grin "Every day hands me a new, often unique set of challenges. It's just one of the things that makes the job so interesting,"

For Fahmy and the other full time doctors employed by the Hong Kong office of International SOS, most days begin around eight with a call into the company's Causeway Bay office. It is in this nerve center that a multilingual staff of thirty deals with the complicated logistics of handling the medical emergencies of clients by communicating with hospitals all over the world, insurance companies, and other ISOS offices worldwide. If a client from anywhere in the world needs assistance in Southern China, a team from the HK office is usually called in. Once the location of a patient needing assistance or evacuation is pinpointed, a medical escort team is assembled and sent into the field.

One recent ISOS case involved a Brazilian traveler who wound up in a Guangzhou hospital after lapsing into a coma after a drinking spree. The Brazilian's friend called his parents, the parents called the insurance company who then called ISOS. Dr. Fahmy was sent immediately.

"First I went to the hospital in Guangzhou. The patient was in serious condition, and I suspected that there was more than alcohol involved (this proved to be the case). I brought him back to Hong Kong, and after his condition had stabilized I was able to bring him back to his family in Brazil."

For doctors doing medical escort work, the main concern in any situation, after stabilizing the patient, is to make sure that the client is then brought to what's called in professional parlance a center of medical excellence. For travelers in Southeast Asia, this usually means Hong Kong or Singapore.

"For various reasons, both having to do with language and quality of care, we want to bring any patient who, because of their medical condition cannot be repatriated immediately, into Hong Kong or Singapore first." Says Fahmy.

In most cases patients are brought out on commercial airlines, the company arranging either a row of economy seats to be used as a stretcher or, for less serious cases, seats in business or first class. But in cases where the patients are too ill - or potentially infectious - to travel commercially, the company employs its own air ambulances. The one used in the China region is a specially designed Lear Jet tricked out with all the latest medical gear.

"Our air ambulance can function as a fully mobile Emergency Room and Intensive Care Unit (ICU)," Says Fahmy. "We believe in being equipped to handle almost any medical emergencies that might arise."

Though the HK office of ISOS employs a small number of in-house doctors, it also keeps on retainer a number of doctors who work on a part time basis. Dr. John Wedderburn runs a small clinic on Lamma Island. A medical escort since 1993, Dr. Wedderburn worked for a number of smaller companies before coming on board with ISOS. Unlike many GPs, Dr. Wedderburn discourages regular patients from making appointments too far in advance.

"At any point during the day I can get a call from the company asking me to fly somewhere to evacuate a patient, or to repatriate a patient from HK back home. One Sunday last month I woke up expecting to spend the day on Lamma doing housecleaning, and instead wound up escorting a gentleman who'd had a stroke in Hong Kong back to his home in Memphis."

Dr. Wedderburn admits that working as a medical escort makes his regular practice seem a bit dull by comparison. Flexibility, patience, and the ability to deal diplomatically with ever-changing situations, he says, are the keys to being a successful medical escort.

"It's not uncommon for the description of the problem and the problem itself to be quite different," says Wedderburn. "In one case I had to fly out to help a European woman who'd been in a car accident in China. The local doctors had determined that her injuries were not life threatening, but that she had tachychardia (a condition in which the heart beats too rapidly), which they were dealing with through medication and withholding of fluids."

"As soon as I arrived I could tell that the accident had been worse than we'd been told, and that the patient was suffering from severe blood loss. The issue then became dealing with the original doctor's misdiagnosis and getting fluids into the patient as quickly as possible without causing the local doctor to lose face."

According to Wedderburn, the problem was managed diplomatically, and the patient was soon on both the road home and to recovery. Dr. Fahmy concurs that cases like these do happen, and that a good medical escort must maintain as unobtrusive a posture as possible while doing everything they can to assist the patient.

"Even in cases where we do not agree with the local diagnosis, we need to maintain a good rapport with the local doctors and be as culturally sensitive as possible," says Fahmy. "We must never forget that we are on their turf."

The majority of day-to-day cases handled by medical escorts involve physical illness or injury; however, expatriate life can be stressful, and evacuations due to mental or emotional issues aren't uncommon. A basic understanding of how to keep a mentally volatile patient stable enough to be brought on an airplane is another key skill for medical escorts.

"One of my more memorable cases involved escorting a European gentleman home from Indonesia," says Dr. Fahmy. "The fellow had suffered a breakdown, and had committed acts that were quite offensive by local standards. Through the application of a great deal of diplomacy the Indonesian government agreed to drop the charges on the condition that the man be taken out of Indonesia with no delay."

But commercial airlines are notoriously reluctant to allow people displaying obvious signs of mental illness to board airplanes; in cases like these the escort acts not merely in a medical capacity, but as a buffer between the patient and the flight crew.

"The patient was in the midst of a rather severe paranoid episode, and the potential for him freaking out on the plane was very real. Though I had a syringe with anti-psychotic medication on me, I wanted to keep that option as a last resort."

The patient was brought home without major incident and diplomats from both nations were able to focus on more far reaching problems. Dr. Wedderburn concurs with his colleague on the challenge of escorting psychiatric patients.

"I once escorted a Scandinavian man who was both large and extremely out of control. He became rather agitated changing planes at Heathrow, though I was able to calm him down with the assistance of sedatives and an extremely patient nurse."

Dr. Wedderburn was able to get the patient back home, though not without at least one unexpected hitch when the patient took off his pants while lining up for immigration in the home stretch, resulting in a police escort.

So if escorting the ill, injured (and occasionally deranged) across the globe is a medical escort's workload during normal times, what happens when crisis of large scale proportion happens? The recent bus crash tragedy in Egypt provided a textbook example of a medium-scale medical evacuation operation as doctors from seven ISOS offices converged on Cairo to treat - and eventually repatriate - thirty injured HK tourists. But this operation was a localized occorance. Things get a bit more complicated during a disaster of global propirtion.

"During SARS, our phones rang constantly," Says Fahmy, speaking of the 2003 crisis. "Though it didn't become the pandemic that we feared we still remained in a state of heightened alert. I was on the ground in Thailand within 24 hours of the Boxing day tsunami, along with medical escorts and doctors from all over the world."

It's important to note that, while medical escorts can often be found at the scenes of great humanitarian disasters, services like ISOS are businesses and not humanitarian organizations. (ISOS is not, for example, Medecins Sans Frontieres, though according to Dr. Fahmy a lot of these humanitarian organizatioins and NGOs are their clients. "If any of their people needs to be medivac'd, we are the ones who go in and get them.")

"When you travel, you really need to be insured," says Fahmy. "Our company has assisted uninsured patients on several occasions, but we are still a business. Very often the only help available to the uninsured traveler injured in a foreign country comes from either their families or embassies, never a certain proposition."

Despite the challenging nature of the work, Dr. Fahmy says he's never looked back.

"Being a doctor in Paris was a good life, but working in the field of medical assistance is far more challenging."

Though Doctor Wedderburn still maintains his private practice, he says that the challenge of his part time job is more alluring. "It's very rare I return from a trip without being able to say something interesting happened. After delivering my patient home to Memphis I had an hour to kill and visited Graceland. How many other doctors in Hong Kong get to do that during office hours?"

Medical Escorts: Always Intense ran orginally as Not Your Everyday Doctors in the HK Weekend Standard on March 04, 2006

Skiing in a burqua in Afghanistan...