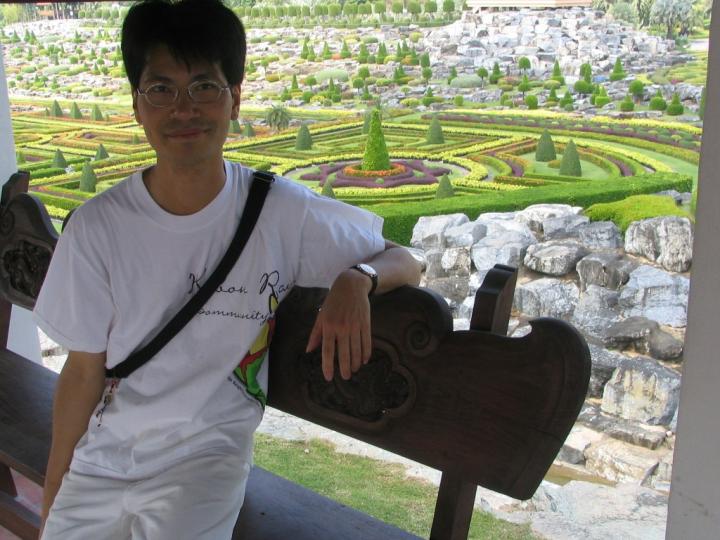 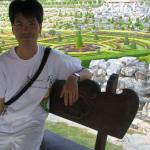 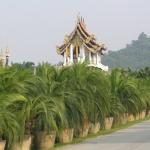 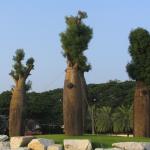 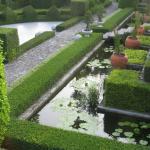 It took 2 hours from Bangkok’s International Airport by taxi to Pattaya’s Nong Nooch Tropical Garden for approximately US $25.  My friend Ricky and I arrived at the entrance of Nong Nooch Village closed to 9pm and it was important to have contact number reaching the reception of this resort as Nong Nooch Village has its own guards and gated for security.  Not all Bangkok’s taxi drivers know the way to Nong Nooch but they certainly know how to get to Pattaya Beach.  Nong Nooch is just a turnoff on the main highway on the way to the beach.

We were expected at the security gate, so the taxi could go through and we drove in complete darkness except the taxi’s headlight for another 15 minutes.  I could see rolls of huge palm and coconut trees on both side of the road.  Once we passed the main gate, there was a lake on my left.  I was welcomed at the reception at the end of the lake and they guided us to the Lakeside Villa behind the Parking Area in the north.

A couple of months ago, I was talking to my friend Greg who used to work at Nong Nooch breeding butterflies.  I planned my tour to Chiang Mai attending the opening of Royalflora International Flower Exhibition and a visit to Queen Sirikit Botanic Garden in Mai Rim.  Bangkok would be the stop-over for my flight after Chiang Mai.  However, I wanted to get away from the heat and pollution of both Bangkok and Pattaya, Greg suggested me to stay at Nong Nooch instead.  I booked my Lakeside Villa on the website: www.nongnoochtropicalgarden.com for US $39 per night including breakfast.  It proved to be a surprisingly tranquil place and a real bargain.

The first night, we enjoyed our dinner at Plub Plueng Restaurant which opened until 10pm facing the lake with Karaoke of Thai songs accompanying the nice Thai cuisine.  After, we took a walk silently around, ventured further in darkness along the main road to the east where a replica of the Stonehenge stood.  It was amazing standing there under the stars with not even a soul around.

The next morning, I was woken up by the elephants coming behind our villa.  They were driven by their elephant keepers to the Thai Culture and elephant show to the east of our villa.  They would first clean up, have breakfast and start their morning exercise routine.  I went out to explore the garden alone at 7am before the rest of the tourists poured in from Pattaya Beach on coaches at 9am.

I started by ascending the Sky Walk which were connecting bridges affording a bird-eye view of the immaculate gardens below.  There were lovely fountains and gazebos at the European garden completed with trimmed hedges and classical stone statues.  Near a lakeside Thai-styled pavilion, the Pottery Display Garden featured gazebos, as well as a giant elephant, a butterfly and an owl constructed entirely by numerous small pots.  From a distance, I saw the Bottle Tree, a landmark for Nong Nooch.  On the Westside, there were beautiful orchids, lotuses, waterlilies and bromeliads at the Orchid and Bromeliad Display Gardens.  Numerous Statues and murals with plant displays made perfect settings for tourist photos.  When the tourists started coming into this part of the garden, I escaped by the Sky Walk to the eastside, back through the waterfall, the European garden, to Plub Plueng Restaurant to have breakfast before Ricky and I joined the rest of the tourists at the Thai Cultural Show House watching an exciting combination of Thai dance, boxing, and elephant entertainment.

Nearby, there were elephant rides available.  We stocked up some cheap T-shirts with images of elephants and Thai sceneries.  We also bought some mouth-watering tropical fruits such as rose apples, jackfruits, pomelo and green mango after lunch at the Vivant Restaurant.

The surrounding area featured a mini zoo packed with monkeys, exotic birds for example peacock and ostrich, also cute rabbits etc.  Beyond Butterfly Hill, there was an enclosure breeding butterflies adjacent to the Flower Display Garden.

I went to explore the Vine Alley to the south of the garden while Ricky relaxed in the cool swimming pool back near the Lakeside Villa.  All climbing plants were in pots or in the ground with metal umbrella structures for effective display.  The best time to visit is after the rainy season in May when all the vines start flowering.  Petraeovitx bambusitrum, called the Nong Nooch Vine, has golden yellow flowers hanging down in similar structure to a wisteria vine.  Beaumontia murtonii was flowering and fruiting simultaneously.  The giant white flowers make nice contrast to the equally huge green fruit.  Several climbers from the pea family were flowering even now in the dry season (November): Lablab purpureus, Afgekia mahidolae, Mucuna thailandica and Vigna adenanthus.  Some other rare vines include Wagatea spicata, Momordica cochinchinensis, Banisteriopsis chrysoflorum, Gmelina philippinensis, Aristolochia gigantean and Vandasina retusa.  A particular rich collection in the morning glory family includes Merremia dissecta, M. tuberose, Rivea corymbosa, Argyreia mollis and Ipomoea alba.  The Vine Alley extends all the way towards the mountain, but sadly remains private along with the Passiflora collection and Hortus Botanicus.

Once passed the closing time of the garden, all tourists left and again Nong Nooch calmed down and I spent another moonlit night under the stars on top of a Thai-styled pavilion at the French Garden.  I was starting to appreciate even this mixed garden style pioneered at Nong Nooch.