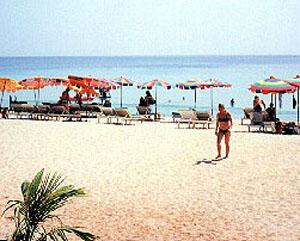 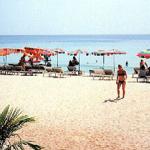 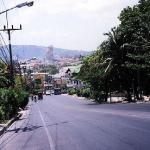 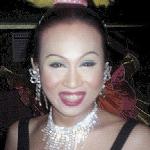 British writers Christopher Hitchens and Martin Amis have both mocked travel writers for their use of the cliche "land of contrasts" in their accounts of semi-exotic locales. Because so much travel writing is giddily promotional, the cliche is an easy way to describe the locale favorably and thoroughly - and quickly and lazily. "X - Land of Contrasts! Hot, cold; fat, skinny; fun, boring - X has got it all!"

One could just as well be writing about a cup of coffee with such adjectives, or even about Christopher Hitchens and Martin Amis. Just once I would like to see an article entitled "X - Land of Unending Sameness! Infernally hot all year round, X is populated by clones whose culture is bland and uniform." Not that such a place exists, of course, but imagining that it does might help end the unending sameness of promotional prose.

There are contrasts in Phuket, just as there are contrasts in Idaho, but they often defy simple adjectives. As my friend drove me to his house from the airport, he said, "This village is called ___. It is Buddhist." This was my first surprise. Of course it's Buddhist, I thought. It's in Thailand. I had forgotten that much of the south of Thailand is Muslim. Sure enough, we eventually passed through a Muslim village and saw all the many props of that Arab religion scattered over an Oriental stage.

Every once in a great while, some crank blows up a bomb in southern Thailand. The usual suspects are Muslim separatists. Historically, the Muslims in the Isthmus of Kra have strained at the Thai yoke, and would probably prefer to be part of officially secular, but unofficially Muslim Malaysia. Religion is not the only reason: ethnicity also plays a part, as Muslims tend to be Malay, not Thai. Indeed, "Phuket" is a Malay word: it means "hill," which topographical feature the island has in sometimes aggravating abundance.

Intermittent bombs may be cause for concern in these jittery days of wars on terror, but it is actually rather remarkable that the Muslims and Buddhists of Phuket are not at all-out war, the fundamentals of their respective religions being so different. The difference is most marked in respect of gender roles and attitudes toward alcohol. The Muslim women are required to cover their heads and sometimes their whole bodies; the Buddhist women sometimes show so much skin that an atheist would blush. On the Muslim side, men are men, women are women, and homosexuals are, Koranically speaking, damned. On the Buddhist side, men dress up like women and dance and sing the cabaret. The Muslims do not drink; the Buddhists sometimes drink to excess.

My friend and I, neither of us particularly religious, took in a cabaret show one evening. The bar was a run-down place not very far from a Muslim community, but very far from the traditional Phuket nightspots of Patong (a kind of miniature Pattaya) and Phuket Town. The proprietors wanted to keep their overhead low, which was understandable, but their revenue suffered: we were the only customers. As in many Thai establishments, the staff far outnumbered the clients. But this staff was special: to a man, they were women - what the Thais call katoeys, or "lady-boys."

The most interesting revelation arising from this riot of liberality? The transsexuals said that if they were born again, they would be born transsexual. They preferred it. I wondered why. In my experience people living alternative lifestyles tended to be rather tortured souls. A possible answer occurred to me. The great glory of being a man is that you are a hunter: your aggression is your power. A woman, on the other hand, is hunted, and her power derives from the ability to seduce and refuse. A transsexual has both powers. He/she is not so much transgender as "hypergender," a coinage no doubt untranslatable into Thai.

If the cabaret were likely to offend Muslim sensibilities, the beaches probably would too. Most of the beachgoers are of European descent, and, more to the point, a great many of the women go topless, even those Leviathans that probably should not. Enlightened Europeans think public nudity no big deal, as indeed it is not. But a Thai of any religion would not be caught dead exposing her chest to sunlight. Thai women rarely even wear bikinis or swimsuits: it's T-shirts and shorts for them. Phuket: burqas and bare breasts.

When the environmental destruction attendant upon tourist development threatens another Thai island, local pundits usually refer to Phuket as the first and worst case. Once called a "pearl" by publicists, Phuket is now the subject of articles with lugubrious titles like, "There's Still Some Shine On This Pearl" (this from Thai Airways' in-flight magazine, Sawasdee.) Truly, the place has an overrun feel about it, if not the feel of a colonial outpost, a Babel of languages. Beautiful traditional Thai-style houses adorn the island's many cliffs, but they are usually part of a resort, or under foreign ownership. Still, the waters of the Andaman Sea surrounding the island contain a stunning number of tropical fish, which will sometimes swim rings around you - literally. And there is a great quantity of some nasty invisibility with a pinprick sting, enough to deter you from swimming. Phuket: high rises and organisms low on the food chain.

Darwinism of a different sort provides another contrast, not unique to Phuket but general to the developing world: that between rich and poor. One night, well after sundown, I watched an old woman crouching in front of her house and weaving some kind of straw together, as a preliminary to assembling household brooms. She seemed to be doing the job herself, and with grim perseverance. Not so very far away, there was a hotel charging over $200 a night for its rooms, a sum equivalent to many a broom indeed.