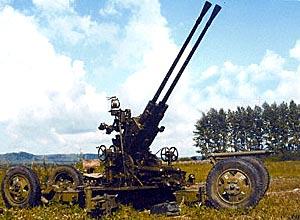 China tries various precipitation enhancement technologies: on a hill in the suburb of Beijing, an old anti-aircraft gun is rigged to shoot cannisters of silver iodine into the clouds to make rain.<br 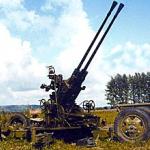 BEIJING, June 21, 2004 - On an overcast day in the Fragrant Hills Park in western Beijing the booming sound of anti-aircraft guns suddenly echoed off the mountain side, shaking the air and startling hikers.

This was no air raid drill, nor was it in preparation for a coming invasion from Taiwan or Japan.

Rather, it was the sound of Beijing meteorologists shooting cannisters of silver iodine into the gathering clouds in the hope that the chemical would enhance rainfall over the city.

In a mad drive to address Beijing's growing water shortages, the city has decided to take every measure possible to increase water supplies, including the widespread use of unproven precipitation enhancement technologies.

"I would say that nearly every time it has rained in Beijing or northern China this year, man-made technologies to enhance precipitation have been used," Hu Zhijin, a cloud expert at the China Academy of Meteorological Sciences, told AFP. "Since April it has rained more times in Beijing than in previous years, but as far as the volume is concerned, we haven't had that much more."

Hu said rain enhancement technology was still an immature science. So far there are no analytical models or methodologies capable of producing data that conclusively shows the technology is effective.

A 2003 report by the US National Academy of Sciences also concluded that after over 30 years of trying, "there is still no convincing scientific proof of the efficacy of intentional weather modification efforts." Such reports, however, have not fazed Chinese officials, who, faced with growing water shortages, have ordered that man-made methods like cloud-seeding be used whenever and where ever clouds form over the nation's arid north.

"The widespread use of this technology in northern China more than anything reflects the prominent shortage of water we have," Hu said. He added chemicals like silver iodine, liquid nitrogen and calcium chloride were being distributed into clouds by airplanes, rocket shells and anti-aircraft guns to build up moisture in the clouds and increase rainfall.

The work aims to enhance or multiply tiny particles of ice in clouds which become the building block for precipitation as they gather moisture and eventually fall out of the clouds as rain, hail or snow.

According to state press reports, from 1995 to 2003 China spent 266 million dollars on rain-making technology in 23 provinces and regions and now boasts some 35,000 people who work in the field.

In 2003 alone, the state spent some 50 million dollars dispersing chemicals into clouds through the use of 30 airplanes, 3,800 rockets and 6,900 high artillery shells.

"Man-made efforts to influence the weather is an important method by mankind to use modern science and technology to prevent and reduce disasters, and is already receiving a high level of importance in our country," Qin Dahe, minister of the State Meteorological Bureau, said earlier this year. Chinese scientists are also researching how to expand the technologies to disperse fog, stop hail from ruining crops and reduce frost and air pollution. Last week, meteorologists in Shanghai announced they would use the technology to induce more rain as a way to cool the city down and avoid the summer spike in electricity demand that has been attributed to the city's air conditioners.

"As far as the science of weather modification is concerned, it is appropriate that the 'proof' is still lacking but the evidence that it works in certain situations is very compelling," William Cotton, a noted meteorologist at Colorado State University, told AFP. "Large-scale operational programs have produced and continue to produce positive effects for society."

But Cotton warned against using the technology as a "political placebo", or a decision that it is better to do something than to sit idly by and do nothing as reservoirs dry up and crops wither due to the absence of water.

"The growth of the population and the development of the economy has led to a high increase of water demand. This is happening as water shortages through frequent drought, a fall in ground water levels and the drying up of rivers like the Yellow River, become more frequent," Hu said.

Precipitation enhancement is also cheaper than some of the other schemes that the Chinese government is implementing to solve water shortages, he said. Last week, the government announced a 48.8 billion yuan (5.9 billion dollars) nine-bank loan agreement to help pay for the 136 billion yuan South-North Water Diversion project that will carry water from the Yangtze River basin to Beijing and the north. To help pay for the project, Beijing will raise water prices by 20 percent in 2005, a further increase after several price hikes over the last few years.