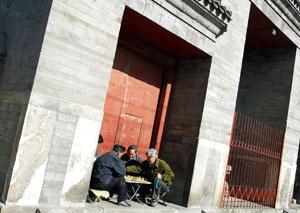 Beijing residents play chequers in a doorway in Hutong. Beijing's Hutongs date back to the 12th century and are a labyrinth of brick houses with walled courtyards. 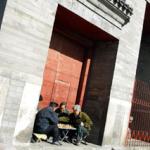 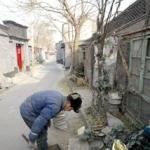 Equipped with a simple camera, 71-year-old Beijing resident Lu Baohua is striving to record a world that is disappearing fast.

The retired artist has spent four years taking thousands of photos of hutongs, the capital's traditional narrow alleys of single-storey homes, which once filled large sections of its central districts.

Lu, pedaling around the city of 13 million on his well-worn bike, is in a constant, tightly-run race with the demolition crews.

"Sometimes I return to a beautiful building I've taken photos of in the past, and it's no longer there," he says. "It's a real pity."

One of the world's best-preserved capitals when the communists took power in 1949, Beijing has changed beyond recognition in recent years.

The city is now in a seemingly frantic rush to turn itself into another glitzy international metropolis with the same high-rise office towers and shopping malls that can be seen everywhere from Tokyo to Toronto.

This process has been reinforced by its successful bid to host the 2008 Summer Olympics, and in a few short years, the glories of traditional Beijing may have been reduced to just a few sterilized tourist sites, conservationists warn.

For Lu, saving the remaining memories of the capital's past for posterity is something that needs to be done, and not just in the interest of future Chinese generations.

"The architecture of Beijing is a treasure belonging to all of mankind," he says.

To realize his project, Lu has to rely on only his meager pension, setting aside as much as he can to buy new film rolls.

"Every day, I just eat a couple of steamed buns and a bowl of porridge that I buy on the roadside," he says. "In summer, I bring a bottle of water for my bike rides."

Lu approaches his project with an almost scientific attention to detail, taking photos of key features of each old building, and making meticulous notes.

He has covered 62 square kilometers (24 square miles) of Beijing alleys this way, carefully marking the areas he has already researched with a red pen on a map.

It may be arduous work, but it is worthy of its subject, a city that to Lu has almost attained the characteristics of a living organism.

"Over the course of 800 years, Beijing evolved into a unique city, beautiful in all its system and complexity," he says. "There was no other place like it in the world."

Spreading out a large city map, Lu shows the intricate structure of old Beijing, divided along a north-south axis, which, he says, even determined the location of ordinary dwellings.

"There was an overall plan to it," he says. "The city was a unified piece of art, and it can never be recovered."

It is when Lu talks about the fine details of each old building that the enthusiasm for his work really shows.

Hundreds of his photos are of rhymed couplets, painted by master calligraphers on the entrances of many homes in old Beijing.

The verse would often express the most fundamental ambitions of the residents, such as success in business for merchants, or ethical living for scholars.

"This was the resident's way of saying: 'This is who I am, and this is what I stand for,' and then let people judge if he really lived up to it," he says. "It was very transparent."

Lu's collection of pictures is mostly of architecture from the Qing Dynasty, lasting from the mid-17th to the early 20th century.

But the capital also has -- or had -- many fine buildings from the Republican period, between the fall of the last emperor in 1911 and the beginning of communism.

Many of them have a story -- and often the details are the most telling.

As China first modernized from about a century ago, and established its own postal service, several private residents in Beijing had slots carved into their front doors so they could receive mail.

"It was the information revolution of that age," Lu says. "It shows Beijing wasn't cut off from the rest of the world."