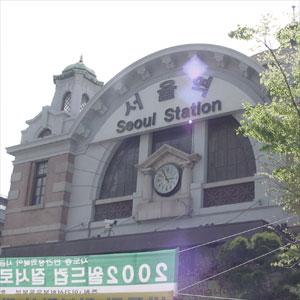 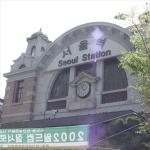 While the Seoul Station may look rather normal and totally non-threatening, little did I realize that this is one of the better known spots for demonstrations in South Korea. Pardon me if I did offend anyone with this remark, I meant no harm in my observation. In fact, as you would soon know, there are more to the Seoul Station than mere political agendas.

One of Seoul's major landmarks, the Seoul Station is definitely the main hub for transportation throughout the whole country, and especially so for Seoul. Here, you can find trains running to most destinations both north and south of the country. Towards south, the trains will go along the Kyeongbu line while fewer trains go to the north using the Kyeongui line. Aside from trains, this is also where two of Seoul's subways intersect.

If you are a tourist and have just arrived in Seoul, I would recommend this as one of the first few places to start your tour. Most buses running through downtown will definitely stop by at the station; therefore you might want to check it out before venturing further. This is not the only attraction why you should swing by the Seoul Station. Just directly opposite the station is the 2002 FIFA World Cup? Official Shop. Here, soccer fans can go wild as they can find just about any imaginable authentic and official goods for the 2002 World Cup matches! There is merchandise like t-shirts, shorts, miniature footballs, key chains, frames, stickers, posters, and lots more! These products are all priced in Won and are not very expensive if you are paying in US dollars. As Mastercard is the official card for the World Cup, shopping with your credit card can save you a further 5% of the total price.

Between the station and the 2002 FIFA World Cup? Official Shop is a large plaza. As was mentioned earlier, thanks to the centralized location and high traffic, many demonstrators chose to gather at this spot. This could be a rather unnerving experience for tourists who are not used to street demonstrations. Should you encounter such an incident while you are there, try using the backdoor to get to the station. Although not as convenient as going through the front door, yet the thought of being able to avoid a mob is a good enough excuse. Like what some Korean friend suggested, should you encounter a crowd as you depart from the train, go to the far end of the plaza and exit from there.

If you are hungry and would like to check out some Korean food, there are several fast food restaurants available in the station. There, you have a choice of either Korean or Western food. Of course, I would not suggest a meal here if you have another option. No, I am not indicating that the food is bad; it would just be a lot better if you could experience your first meal elsewhere. If you are walking along the street near the area, you may want to pop by some other restaurants located along the main street. There are also many food stalls by the side that serves a quick and delicious snack. In my next article, I will tell you more about the kind of food I had tasted while in Korea.

Now, let's go back to the Seoul Station. Aside from a mere station, this place is also home to the Seoul Railway Museum. The museum was opened 15 years ago, on April 1987. Here, you can find exhibits in relation to Korea's train history. There are maps of Korea's railway, sample tickets used over the years, construction tools, miniature replicas of trains and and even miniature officials wearing their uniforms, and more. There are also scenes and gadgets showing the very first railway line up to the current modern subways. Check out also the neat exhibit depicting the high-speed rail line. Altogether, expect to find some 500 items in 6 different areas.

Specials:
Seniors, handicapped persons and children below the age of 6 may enter free. You may also enter free if you have a valid train ticket.