Seven Hours in the Soul of Seoul 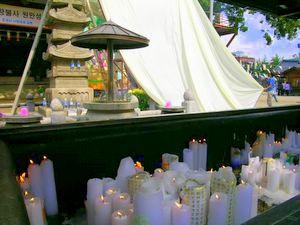 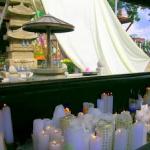 A couple of hours before dawn and xenophobia hangs thickly in the air. I'm standing at the tail end of the longest airport line I've ever seen, waiting with a hundred or more haggard, jet-lagged travelers for admission into the Republic of Korea. The other lines - for Korean citizens - are short. Ours, too long to be fully accommodated by the confines of the immigration hall, leads to the only immigration counter in twenty labeled Non-Koreans.

"At least they count us as human now," quips a nasal American twang from a man in a rumpled business suit. "That sign used to read Aliens."

Twenty minutes and as many steps later the mood on the aliens line is getting ugly. A few have skipped over to neighboring Koreans only lines, and perhaps sensing impending riot, the authorities open another two lines to outsiders. By Six AM I'm stamped and walking towards the exit hall. My onward flight to Seattle departs at four that afternoon. Leaving 90 minutes for transit and formalities each way, I have about seven hours to find the soul of Seoul. I need to put distance between myself and this airport quickly.

But this may prove easier said than done.

Blocking my way from the immigration hall is a percolating horde of adolescents, mostly girls with a few scattered boys. They emit a collective scream as I walk through the gate, a sound which quickly peters out to a disappointed sigh. I have no idea what any of this means.

In clear need of information, I press myself through the near-solid human wall, and make for a nearby booth offering just this.

I open my mouth to speak to the tall and spiky haired booth attendant - himself barely out of adolescence - but my words are drowned out. The teenage horde roars in unison and stampedes in my direction. I flatten against the booth as the shrieking wave rushes past me on its way to the far end of the terminal. There, a sunglass and overcoat-clad figure bolts for the exit, panicking entourage in tow.

I stare up at the attendant, who answers my question before I can even ask it: "Those kids are pop music fans. They've been waiting all night for a famous Korean pop star to come home from overseas trip. I really hope he make it to his car in time."

"The girls will tear off his clothes, and the boys will rip out his hair."

I have now experienced two faces of a Korean welcome, and I'm still inside the airport. I check my laptop at the left luggage booth and catch a bus into town.

I have a blind date to keep. For a few weeks I've been communicating over the Internet with an expatriate punk rocker, a Seoul based English teacher named Unity. Through our brief email volleys I've become convinced that Unity will make an ideal guide for my half-day mission to uncover the soul of Seoul. She told me to call her from the Shinchon district, but its still too early in the morning for phone calls. I head over to Dunkin Donuts to drink coffee and collect my thoughts. The sounds of a slugfest jangle me from introspection.

The Korean love of brawling is well known. Nonetheless, I'm surprised at the sight of two middle-aged denim-clad men beating the shit out of each other on the sidewalk. They pause between shoves and punches just long enough to yell at each other, fine machine-gun staccato syllables that are loud even through the pane glass window. The girl behind the counter takes no notice. An early-shift worker, she no doubt witnesses this sort of thing regularly. After five minutes of punching, kicking, shoving and shouting, the men stagger off in opposite directions, still hurling invectives.

The coffee is good, and surprisingly strong. I leave the shop revitalized and wander the streets.

Morning is a good time to explore Seoul. Shinchon is a bustling hub of restaurants, coffee shops, bars and shopping malls, and in the hours between dawn and nine the early risers have yet to show in force, while the puke and detritus of the night people have already been swept aside by street cleaners. I walk up a hill and find myself in what appears to be a nest of love hotels. Hanging over the street are many signs bearing room prices by the night and by the hour. Its a pretty little neighborhood, hilly and quiet, and from certain points on the street the mountains surrounding the city can be seen in all their autumnal glory. I wander back down to Shinchon and call up Unity from inside a Krispy Kreme outlet. Thirty minutes later she shows up, looking exactly like the picture on her Myspace.com profile, still pleasantly drunk from the night before.

"Lets get out of this neighborhood. It's too god-damned bright."

We head down into the Shinchon Metro station. A miracle of modern chaos, the Seoul Metro map is a jumble of multi-colored lines. There are now more subway lines in Seoul than there are primary colors, forcing the authorities to code individual routes with subtle hues. Locals seem able to make sense of it all, but even the most savvy urbanite visitor would find the system nearly impossible to decipher. Although she's lived in Seoul for two years, my new friend Unity admits she hasn't quite grasped the map's complexity.

"I think we take the light blue to the dark blue." she says uncertainly, running a digit along the smooth noodle map on the wall before leading me into the bowels of the system.

A few stops later we are again standing in sunlight, on the immaculately clean brick pedestrian mall known as Insadong. The mall is crammed wall-to-wall with tourists sucking up Korean ambiance, stalls hocking genuine Asian knick-knacks, and food vendors wearing spotless white gloves as they dish out packets of French fried yams, boiled onions, and small, snail-like creatures from a bubbling cauldron.

"This place is filled with tourists, but its still pretty cool, for your purposes anyway," says Unity, making me wonder what my purpose really is, or even if I have a purpose at all.

Consumption being a traditional break from philosophical uncertainty, I suggest that we split a bag of something and continue the tour. Unity and I eat roasted chestnuts and walk through the back alleys of Insadong, narrow lanes filled with low and pretty buildings of wood and stone lined with flower and herb filled plant boxes. In addition to teashops and restaurants, Insadong also has a wealth of shops specializing in toys and memorabilia from the fifties and sixties. A Gilligan's Island lunchbox catches my eye, but the proprietor wants way too much for it. We stop in a small restaurant and have an early lunch of ginseng and rice stuffed chicken and a cold Korean tofu dish.

The pace of our meal is leisurely, perhaps too leisurely, and after we finish our meal I realize I have less than an hour in which to find the soul of Seoul. Unity tells me that I've set myself up with a fool's mission.

"I mean, define soul," she asks. "Some would say fashion or shopping. For that, Dongdaemoon would fit the bill. If you're talking art, music, punk rock, well, Hongdae is where you'll find all that, but it's still a bit early, and you've got like an hour left."

"Where can I go to be spiritually uplifted? I feel a crash coming on," I say "And not by Moonies, either."

"Well, the closest to that you're going to get to in the time you have left is Jogyesa temple," she replies. "That's just a few blocks away."

Unity and I walk to the temple complex, considered to be the spiritual backbone of Korean Buddhism. It was at this site, in 1945, that that the Buddhist Purification Movement began as a way to cleanse the Korean soul of the stains left by Japanese imperialism. Though only a few blocks from Insadong, tourists here are thin on the ground. Old men sit on a park bench contemplating weighty matters of the spirit, Korean reunification, or perhaps just about dinner. Old women light white candles printed with wishes before placing them on an alter of melted wax. There is an air of reverence, and monks, of course, but not many. I sit down and stare at the melting candles, a wave of contended exhaustion washing over me. Have I found the city's soul? A small chunk of it, perhaps.

Unity taps me on the shoulder. "You look woozy. Perhaps we ought to get you to the bus stop." And she is right. Except for a brief catnap on the plane from Hong Kong, I have been awake since seven AM yesterday morning, and giddy fatigue has begun to catch up with me. Unity walks me to the bus and gives me a goodbye hug. I pass out on the bus; though exhausted, I feel immensely satisfied. A few hours of exploration has afforded me stolen glimpses of a nation's xenophobia and its adoration, its violent streak and lustful heart. Maybe this is the true definition of soul, the parts themselves, and not the sum thereof. Contemplating this, I fall into a deep sleep on the bus, and wake to the sound of the driver barking at me that we've arrived.