Superstitious Chinese split over fortunes in Year of the Goat 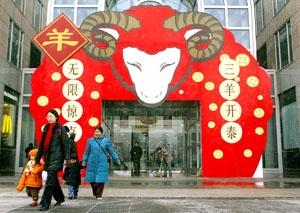 Decorations for the year of the goat festivities mark the entrance to the Oriental Plaza shopping mall in Beijing. 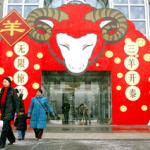 Beijing, Jan 26, 2003 - Superstitious Chinese people gearing up for the lunar new year festivities are undecided whether the advent of the year of the goat in place of the horse will bring good fortune -- or prove a devil in disguise.

While horses are considered by Chinese astrologers to be "wild" animals, the goat is deemed a different beast altogether. They say the "gentle" goat, which is considered the most artistic of all the zodiac animals, will eventually usher in a period of harmony in the world -- but only after a war in the Gulf. "A war between the US and Iraq will likely happen in March but will end after one or two months," said Shanghai-based astrologer Wang Huiseng.

"However, after the war has ended then the world economy and political situation will take a turn for the better," he added. Despite this, "the global economy will still remain sluggish, though China's economy will continue to be stable".

Superstitious people born under the sign of the pig can look forward to a much better year ahead after a tough time during the Year of the Horse, according to another astrologer Yu Qigong. "The horse, pig and rabbit will have especially good luck in the year ahead, especially in romance," said Yu, who warned people born in the year of the dog may not fare as well.

Shop assistant Wendy Zhang was hopeful the year of the goat could end her search for her dream man -- "a mix between Richie Ren (Taiwanese pop star) and (Hong Kong film star) Chow Yun-fat". "I have been to an astrologer and he said my fortune would be good next year... I'm a pig."

With some 5,000 of history, Chinese astrology is not to be sneezed at and many superstitious people still believe in its powers of prediction. Many Chinese however are not keen about the onset of the year of the goat from February 1 with some women reportedly desperate to give birth before then so their child be born a lucky "horse" rather than an unlucky "goat".

Some superstitious Chinese believe people born in the Year of the Goat, especially women, will suffer lifelong hardship. However, feisty Beijing taxi driver, Chen Wei, scoffs derisively at such a notion. "That's just old superstitious talk. Women these days don't care if it's a goat, dog or pig as long as the baby is healthy, beautiful and grows up to become rich," she said with a laugh.