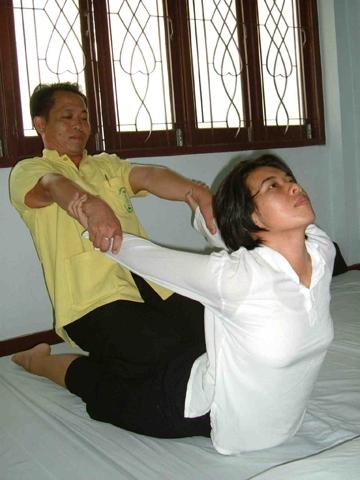 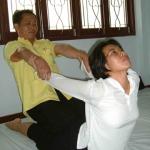 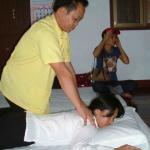 On the grounds of Wat Po, full of towers encrusted with broken ceramics, a reclining Buddha stretching some 15 meters, and statues of yogis assuming positions worthy of circus contortionists, an electrician was trying to untangle a viper’s nest of electrical cables. It was a life-threatening job. His legs and arms had been burned many times by blue sparks shooting out of live wires. Working under a molten sun, sweat was oozing out of every pore. His arm hairs tingled with a sense-memory of how his own perspiration had nearly killed him, when his sweaty arm touched an exposed cable and the resulting shock left his arm completely numb for a month.

He looked up from his work to see two men carrying another guy, groaning with agony, into the temple’s Massage School. An hour later, the guy walked out of the school, under his own steam, talking and laughing with his two buddies. For the electrician, it was an epiphany. “I cannot believe they healing him so fast,” says Suchart Wonguraprasert in English.

That’s when he decided to study massage here, and 18 years later he’s still there. But now Suchart’s a teacher who’s racked up plenty of frequent-flier points by traveling all over the world to give hands-on classes in a discipline which dates back some 2,500 years to the age of the Buddha.

At the Wat Po School of Traditional Medicine and Massage, Suchart is one of 60 teachers. Mostly they work with groups of four to six students. A beginner’s class lasts 30 hours, but it is intensive: six hours a day for five days straight. Now maybe this is part of his sales pitch, but he maintains that “everyone can do massage.” (Yes, and people say everyone can write a novel too. The trouble is they often do.)

In the first classes, he says, “The students must learn positions. Then come the techniques, with the palm, the elbow, with the knee or feet somewhere, but not use everywhere.” After that, the apprenticing masseurs and masseuses have to really get down to the bones of their patients’ woes. Where does it hurt and why? Too much sitting, standing, driving? Of equal importance is ascertaining any ailments the person might have, and not stretching their limbs or pain tolerance to the breaking point. Basically, you have to learn how to think with your hands.

Suchart’s first rule of thumb is “safety first”. And one of the most morbidly fascinating things about taking such a course, he says, is finding out how many Achilles heels’ the human body really has, and how easy it is to break a blood vessel, pinch a nerve, or even paralyze someone. Suchart claims, and a few of his students backed him up on this, that such knowledge (painful to accrue) has given him more sympathy for people in the long run – especially for the suffering. True to its Buddhist origins, these courses still contain a healthy dose of empathy.

But when the students begin kneading, elbowing, and treading on flesh, what kinds of mistakes do they usually make?

“A little bit high or a little bit low, or right on the bone. This is very sensitive area. Under the bone is better,” says the 49-year-old native son of Ayutthaya province.

In a sense, Suchart’s old line of work has given him an advantage, since massage methods help to unblock the power-lines of the body’s natural grid of nerves and muscles, in order to boost energy levels and keep people limber.

But here’s where physiology rubs up against psychiatry: Some mental disorders have physical symptoms. And as the medical world searches for more natural, less toxic forms of holistic healing, ancient massage techniques have become more crucial than ever, Suchart says.

The students come to Wat Po from all points of the compass, but the biggest contingent is the Japanese. Hardly surprising given that the biggest demand for Thai-style masseurs outside of the country is in Japan. Suchart has traveled there many times to give classes, and a few years ago he was even pressed into service during the annual Thai Food Festival in Tokyo’s Yoyogi Park for a live demonstration of his healing art, complemented by displays of Thai boxing, dance, and music. This massage missionary has also given classes in Vietnam, Brunei, Korea, Germany and Switzerland.

It’s easy to see why the man is in such demand, because he displays the seemingly paradoxical qualities found in the best teachers; he’s both authoritative and approachable. He also seems very concerned about the wellbeing of everyone around him. Only 30 minutes into the interview, Suchart is already asking me and photographer Dan White about our physical woes. Maybe we’re just displaying the journalists’ unerring instinct for freeloading, or he really does seem that concerned and trustworthy. Either way, I have to confess to being one of those office-bound, computer coolies who’s having some back problems – Suchart says this is a common complaint these days – and immediately begins working some of the crimps out of my neck.

Then the photographer confesses to having had his head kicked in when some foreigners attacked him for no reason in a barroom brawl – both of them were wearing steel-toed boots – so that he lost most of the feeling in his face, and was physically incapable of smiling for several months. “Imagine not being able to smile when you’re in the Land of Smiles,” laughs Dan. “All the Thais kept asking me why I was so serious?”

As Dan speaks, Suchart nods sympathetically and then begins massaging the side of his face. Within a few minutes, the photographer confides that his facial muscles feel “more animated. Thank you.”

Few jobs offer such an instantaneous sense of accomplishment, or bring the reward of someone’s heartfelt gratitude like those in the healing arts. And the living proof can be glimpsed in the teacher’s warm, Buddha-like smile, when he says, “Helping people is always the greatest satisfaction for me.”

Into the Wild of Khao Yai National Park