Thailand on a Budget 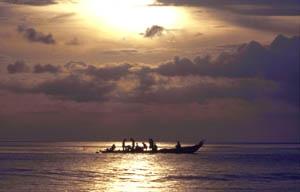 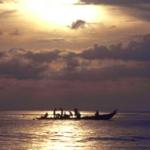 The Challenge: traveling from Kuala Lumpur to South-eastern Thailand for a week's holiday, having miles of sunny beach to yourself, discovering some bargain buys, new places and interesting people, all for less than US$ 100 per person.

Roughly or rough is the word down in a low-budget holiday. As in riding a bus all night, bedding down in a low-budget hotel, facing exotic food you may not want to face... and yet, having your fill of food and drink, meeting colorful people you would rarely meet at an all-star hotel, and discovering that non-five star hotels can have a warmth and charm of their own, as you will see.

I've always wanted to make this trip, since I started my high-flying executive life almost twenty years ago. It might sound a little weird, but I actually missed my university days, when I had to travel on a tight budget. My mission was rekindled after hearing of a traveler who had spent a week along the coast of South-eastern Thailand at a total cost of US$ 80, inclusive of travel from Kuala Lumpur and back. There is a certain magic in low-budget, self-styled, travel vacations infinitely more fun than up-market flings.

But somehow I did not get around to this one until recently when, tired of the heat and crowds of Kuala Lumpur, tired of work (yes, the economy is rather depressing), that I finally had time off and managed to persuade my wife to go along.

Since we're traveling on budget, no fancy limousine escorted us to the Sepang International Airport. Instead, our takeoff point in this case was Pudu Raya bus station in KL, leaving at 9pm and arriving at 8am the next morning at the southern Thai city of Haadyai. Our bus fare was approximately US$ 10 per person one way.

Our "departure" was delayed by half an hour when the driver went missing. Perhaps he did not relish the thought of driving all night while the passengers slept!

Even when I was much younger, I couldn't sleep properly on buses - despite the air conditioning, reclining seats and occasional refreshment stops. I still can't, but at this old age, I've grown to enjoy this form of getting about. Blame it, I suppose, on the spirit of adventure.

There was something wonderful about arriving in the middle of Haadyai town, hailing a tuk-tuk and asking to be taken to the Cathay Guest House, which came highly recommended in my Lonely Planet Guidebook and by other travelers.

It's spread out like a rabbit warren on the second floor of a huge building which faces Niphit-uthit 2 Road, virtually in the town centre but surprisingly quiet. Cathay is the stop for backpacking, mainly Western tourists in this nook of Southern Thailand. Half the people who traipse through its unprepossessing doors are bronzed travelers who have (I imagine) done it all, from Katmandu to Kalimantan, and are here to take a breather.

The other half seemed lily-white and jaded, obviously new arrivals from cold old Europe and wondering why.

The people working at Cathay were very friendly, obviously used to travelers despite being a low-budget hotel. And prices are a snip. Our double room with bathroom en-suite, ceiling fan and solid furniture - 250 Baht per night.

As a concession to their Western guests, Cathay has two breakfast menus: A light breakfast of coffee or tea, two slices of toast with butter and marmalade weighed in at 20 Baht, while a full American breakfast cost 40 Baht. Alternatively, you can choose to walk out for a Thai rice or noodles (yes, even for breakfast!), costing about 25 Baht.

Cathay's location is also ideal: five minutes' walk to Haadyai's bargain-filled indoor market on Phitkasem Road, seven minutes to the bus stop for the coastal town of Songkhla and three minutes to the railway Station.

Trying to keep within our budget, indulging in the buffet at the five-star Lee Garden Hotel is beyond us. Neither is the luxury of paying for a fully-escorted tour around South Thailand... oh well, we'll do that the next time. Instead, we spent a couple of hours in the market, and then we took a bus to Songkhla (15 Baht) and another one to Ko Yo Island, cutely located within a little inland sea which lies landward of Songkhla Town itself.

Songkhla is worth a visit. Unlike so many Thai towns, it has remained relatively unspoilt by recent economic progress. And it retains its old-world charm. But we did not linger too long. Our goal was Ko Yo where, a friend had told us, we would find a wonderful open-air market.

He was right. At the only road junction on the island is a cluster of shops and stalls, the shops stocked with ream upon ream of gorgeous cloth and the stalls offering cotton and silk shirts, dresses and sarongs, dried and fresh fish, and Thai fish barbecue.

That afternoon we seemed to be the only tourists there. We bought two silk shirts, costing 70 Baht each, and then headed back to Haadyai.

Dinner that night was Thai soup brimming with prawns and vegetables chased down with Singha beer (itself a good enough reason to visit Thailand), making us feel as bloated as sea cucumbers and costing a mere 150 Baht.

Next morning we set off by air-conditioned coach for the river port of Pattani, some 150 kilometers south. Breakfast before we left was a prolonged affair as I wanted to read The Cathay's vast message board where backpackers had pinned snippets of advice to fellow travelers on where to stay.

It made fascinating reading. Here are a few examples:

"We found an absolutely fantastic resort. And if anyone should like to know, that is a little place on the West coast of Koh Pha-Ngan caned Bovy Resort!!!"

To which another traveler had added: "Excuse me, but `Bovy' was more like hell for us."

To which a third traveler had added: "It's a matter of taste...each to his own!"

Or, something like this: "Beware of a freelance guide named MU in Chiangmai. He'll take you to villages, to get stoned and pass out. If you press him for info about hill tribes, he'll tell you all sorts of rubbish which will probably find its way into anthropology textbooks. He's a joker. Has fleas too."

That is a sampling of the advice to be found on the notice board of the wonderfully warm and human Cathay Guest House.

At Pattani, we checked into the Palace Hotel which, despite its smart restaurant and business-like foyer, charged only 250 Baht for a double room with large bathroom and fan. We ate lunch at a Chinese restaurant overlooking the wide river which was alive with fishing boats large and small, a perfect spot from which to photograph the river life: fishermen with their catches, mending nets, doing laundry and scrubbing one another too, or boys at play, jumping off their boats into the clean water.

We walked several miles along both banks of the river, both during the day and at night, finding contrasts in life. In the day, the people were mainly workers, fishermen in particular and their families and schoolchildren.

Come night, a new lot of people emerge, mostly from the Muslim and largely Malay kampung a little further up river and speaking what sounded to me like an archaic form of Malay, thick with accent and even thicker with imagery. We chatted with them in a small public garden on the river's edge until midnight.

One, a patchily-tooted 'sex worker,' was a mine of information on the ways of Pattani, revealing what we had all along suspected of this stretch of Southern Thailand - that if you get below its sleepy surface it's very much more interesting than the passer-by would dream of.

The menu in our hotel, for instance, opened up a gourmet world that I hadn't thought of finding outside of a fairly major city, a menu which reflected the region's Thai and Chinese heritage.

I didn't get around to asking what the four or five things were because I thought I was better off not knowing those things.

The next day we caught a coach to Narathiwat, 223 kilometers south of Haadyai and more sleepy looking than Pattani. I'm sure many a traveler has passed by Narathiwat and wondered what on earth could happen there.

Actually, there's nothing much. Half a dozen hotels (in one, the Cathay Hotel, run by a lively elderly Singaporean, we found a quiet, high ceiling, cool double room for 250 baht); a humble, busy fishing community, mostly Malay; a new, marble-floored mosque and school; a beach of fine sand stretching for miles, fronted by magnificent breakers and backed by a many-acred public recreation park; not far away, the Rajanives Royal Summer Palace where the Queen resides one month in the year; and, towering up above the trees in the middle of the jungle, a gigantic gold-leafed Buddha, guardian of the region's rich agriculture.

We spent the afternoon and the next morning soaking up the sun on a beach so deserted (except for the occasional fisherman) that it would have been uncivilized not to swim naked, and indulging in solid Malay food at give-away prices.

As you can see, nothing much... unless you look for it.

For instance, our take-away lunch of nasi padang, spicy beef and vegetables, cost 20 Baht each.

The next day, the bus trip to the border is uneventful, though it's interesting to see how steadily the houses and the people become Malay.

In fact, the change begins somewhere between Haadyai and Pattani.

By the time you reach Sungai Golok at the border, you've virtually arrived in Malay culture. Once across the border, we caught a bus to Kota Bharu which brought me in touch with the things that I love there: several colors and tastes of rice, most delicious of all is nasi dagang (Sticky rice with fish, chopped up with ginger and spices); brightly colored baggy trousers that are the envy of my friends in Kuala Lumpur; and sarongs, truly poly-cultural in their Asian artistry.

Then, we spoiled ourselves. We spent the night with some close friends, who are rich businessmen in Kota Bahru. The house we stayed in is an old English-styled bungalow, standing on its own by a bend in the river in the "rich" part of town. Having two maids to tend to our every need after our budget adventure was really good too!

A little more than 24 hours later, we boarded a night coach for Kuala Lumpur. We slept all the way through Terengganu and across Pahang; arriving at sunrise and to a deliciously cool morning, in Kuala Lumpur!

In the past week, we had traveled roughly 1500 kilometers (just over 900 miles), staying in three hotels, and eating and drinking our daily fill. Six nights and five days cost (for both of us) exactly US $187 - including a handbag for my wife and a pair of branded leather shoes for myself.

All right, we cheated a little in Kota Bharu - but money can really go a long way on a holiday if you don't mind some adventure in your life. Especially when you're in your fifties and have enjoyed the best travel arrangements money can buy!