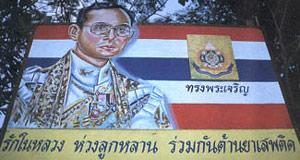 Leader in a formal sense of the Thai armed 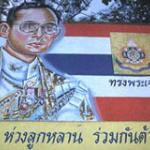 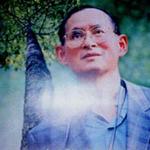 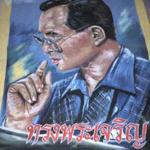 In 1992, Thais took to the streets of Bangkok to protest against the military, which had governed Thailand - nominally a constitutional monarchy since 1932 -- for almost twenty years. The military responded with bullets. For four days the slaughter continued, until the King of Thailand, Bhumibol Adujyadej or Rama IX, demanded that it end. It did -- abruptly. He summoned the leaders of the two warring parties to his palace and appointed a civilian interim prime minister. In Thailand, even generals must approach a sitting King by crawling on their hands and knees.

On any given day, a newly-arrived Western teacher cracks a joke about the King in front of his Thai students. The room goes silent. Smiles vanish. "You will die," says one student, matter-of-factly. The teacher learns his lesson.

This privileged status accorded the King has two main causes. First is the belief that each of the nine King Ramas comprising the Chakri dynasty are incarnations of Rama, the Hindu God and protagonist of the Hindu epic Ramayana. While Thailand officially espouses Buddhism, its culture is infused with the themes and symbolism of the Ramayana, to the extent that Thai kings commonly write their own versions.

All divine, some King Ramas are favorites. Ramas IV and V - the former the 'King' of Anna and the King -- are both considered founding fathers; their flower-strung portraits are ubiquitous. Both men of great erudition, activity, and benevolence, they are credited with having made Siam a modern state, by introducing it to Western culture and technology. Both played a role in preserving Siam's sovereignty in the face of Western colonization of its neighbors. And both had a certain flair that endeared them to contemporaries and to posterity. Rama IV was an avid astronomer, Rama V a chronic smoker of ganja.

Thais place King Bhumibol in these kings' company. Like them, he has guided Thailand through changing times, through its often tumultuous, at times catastrophic, transition to democracy and an industrial economy. To fleeting elected governments that most Thais believe to be hopelessly riddled with corruption and crime, the King provides an essential counterbalance of integrity and morality. He is also an award-winning yachtsman, jazz aficionado, and saxophone virtuoso.

The Thais show their reverence in many ways. Preceding every movie shown in Thailand's cinemas is a short film depicting the milestones of the King's life and his active participation in his subjects' lives. Movie-goers stand throughout the film to review for the umpteenth time his coronation, his ordination into the Buddhist priesthood, his construction of a boat, his discussion of sketches for a development project. In one memorable image, he is shown as a boy, standing next to his elder brother, Ananda Mahidol. King only for a brief period, Ananada died in 1946 under mysterious circumstances - some say assassination.

Many the same pictures of the King shown in the cinemas are seen in Thai houses and throughout the Thai landscape. The most common picture shows the King in common dress, a camera strapped around his neck, raising a finger to the tip of his nose to wipe away a drop of sweat. Rather a vulgar portrait of a monarch so beloved, one might say. But each feature of the image is intended to remind Thais of their King's virtues: the common dress, of his attempts to interact with Thais regardless of class; the camera, of his extensive research into their problems; and the sweat, of his hard work in service of the realm.

'The Royal Projects' is the name generally given to the King's many initiatives aimed at improving the quality of life of Thais, specifically those left out of the country's rapid industrialization. Using a combination of government funding and voluntary contributions, the King with the help of volunteers has created a number of programs addressing public health, education, disaster relief, agriculture and land use, the environment, and the position of the disabled and orphaned. One notable Royal Project, dubbed 'Artificial Rain-making', seeded clouds over arid areas to mitigate the effects of drought. Thai villagers told that the King summoned the rain would little doubt his divinity.

The Projects embody the King's unfashionable conviction that self-sufficiency and sustainability, not globalization and breakneck growth, should drive Thailand's development. A country that escaped Western imperialism should not succumb to its modern, more pernicious economic forms. He even asserted, in a speech given annually on his birthday, that foreigners claiming to have the best interests of Thailand in mind are not necessarily to be trusted. If the present state of Bangkok is any indication - a city known for its thriving sex tourism industry and its four-hour, suffocating commutes, on roads introduced by Westerners to replace nonpolluting canals - the King's message may prove prophetic.

But much to the consternation of the Thais -- who talk of the King's eventual death with sorrow, if not dread -- the active man rendered in paintings is now 73 years old. To the television cameras, Thailand's monarch of 51 years - and the longest-reigning -- presents a visage pallid and fatigued. Despite his efforts, he has seen his countrymen turn guns on each other and seen his country's name become almost synonymous with prostitution. The heir to the throne, meanwhile, is widely regarded to be a playboy, who lacks his father's charisma and work ethic.

This frail, soft-spoken Buddhist monk and jazzman is the glue preventing his country from being torn apart by forces as various as the IMF, Burmese drug-traffickers, and the greed of Thailand's own ruling class. When he goes, the Thai people -- "the dust under the dust under [his] feet", as the Thai idiom goes -- might very well be blown away by the winds of change.