There's life on the railway of death

The Bridge on the River Kwai 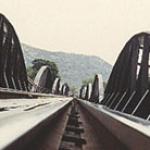 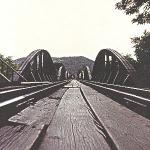 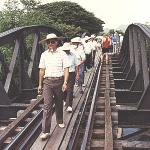 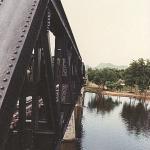 Translated from Danish by Andrew Huddleston

16,000 allied prisoners of war lost their lives here - and more than 100,000 others who aren't mentioned all that often. Today the "Railway of Death" and the Bridge over the River Kwai are two of Thailand's major tourist attractions.

Time has almost stood still at the railway station in Kanchanaburi. The ticket office could have been taken straight from an old film set. At 10:34 the train is due to pull in at the platform. But there's no hectic expectation as the time approaches. Nobody seems to really believe it will arrive at 10:34. And it doesn't! No Western service standards apply here, no passengers wait impatiently, consulting their watches and exchanging tales of bad travel experiences because the automatic doors don't hiss open exactly on time. Here the passengers, mostly westerners, possess a curious patience. An acknowledgement that this is just how things are supposed to be. But when the train turns up at 10:46 things begin to happen fast. Passengers dive for a seat on the hard wooden benches, benches that wake memories of past train rides of the kind that younger generations have probably only experienced on nostalgic veteran railways. Shortly after the train has set off the ticket-collector turns up, asking to see the tickets, punching them all with a friendly smile. The ticket is returned carefully to the shirt pocket. As a souvenir that joins the t-shirt from Bangkok and the photo taken of you riding on an elephant. The ticket from that time you rode on the "Railway of Death" and crossed "The Bridge over the River Kwai".

16,000 allied prisoners of war lost their lives when this railway was built during the Second World War, dying together with 100,000 slave labourers from India, China, Indonesia, Malaysia, Singapore, Burma and Thailand who aren't mentioned all that often. After all, there are lots of Indians and Chinese. 16,000 allied soldiers and civilians are far easier for the tourist to identify with. All the same, every kilometre of railway track cost the lives of 38 allies.

The "Railway of Death" left such a gruesome number of bodies in its track, in stark contrast to the number of wooden sleepers supporting the tracks themselves. Today there's life on the railway. Thousands of visitors to Thailand travel annually on the hard seats, sensing the gory past mixed with the glory of railway history. A choo-choo from the days when dad was a lad. Smiling vendors of local foods appear from time to time, selling their wares between the rows of benches. Now there's a chance to consume exciting Thai delicacies, similar to those found in countless stalls on the rather dirtier Bangkok streets, where there is little temptation to stop and buy. In the train on the "Railway of Death" the smell is somehow different. And ready-to-eat fruit and other things on sticks are consumed with relish for just a few Baht. Pleasantly cool in the tropical heat, Pepsi and Sprite complete the perfect illusion of a school excursion in bygone childhood days. The cheerful vendor hauls them deftly from a plastic bucket that is filled with blocks of ice.

The journey takes us over the famous bridge over the Kwai River, immortalized by Alec Guinness and William Holden yet filmed in Sri Lanka and showing a completely different bridge. But all the same... This is the real bridge. This is the genuine bridge that was bombed several times in 1945 and first rebuilt after the war. Two of the arches were supplied from Japan. Quite grotesque considering that Japan was the nation that was responsible for the loss of the lives of thousands of prisoners and slave labourers while building the railway. Today the bridge stands as a memorial to the prisoners of war and slave labourers who died of illness or as a result of torture by the Japanese.

Construction of the railway began on the 16th of September 1942 with a labour force of about 30,000 prisoners from the allies and more than 100,000 slave labourers. First estimates by the Japanese engineers suggested that it would take at least five years to build, but the Japanese army forced the prisoners to complete it in only 16 months. On the 25th December 1943 the "Railway of Death" was completed.

Those who built but never rode

Today not many people seem to be thinking particularly deeply about the gruesome history of the railway as the train rattles and rumbles down the track. People discuss the old luggage nets, the wooden benches, the old-fashioned ceiling lighting and other things remembered from ancient local railways. They marvel at the beautiful lake views, the Kwae Noi River and the small temples. And they remember the last evening in Bangkok.