The Trade in Chinese Relics 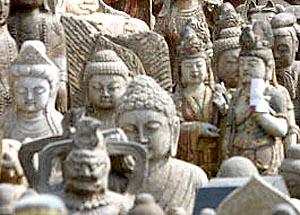 Replicas of antique statues, at an antique market in Beijing. 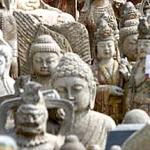 BEIJING, April 25, 2004 - When a grieving family placed a fist-sized clay lion in a tomb in central China's Henan province 2,000 years ago, it was meant to protect their deceased relative from evil in all eternity. Little did they know that 100 generations later, the finely shaped figurine would join a steady stream of priceless relics being smuggled out the country to feed an insatiable global market in ancient Chinese art.

"You're not really allowed to take it out of the country," says a shopkeeper at Beijing's Panjiayuan antique market, as she pitches it to a foreign visitor. "But if you carry it on the plane, chances are customs won't see it."

China is bleeding its cultural heritage through its porous borders, and the government is nowhere close to stemming the flow, or even grasping its scale. When customs officials scratched the surface by conducting random checks of just five percent of the total cargo departing China in 2000, they discovered 8,780 smuggled antiques.

Non-governmental organizations like the Beijing Cultural Heritage Protection Center can only watch in despair. "Every day there's a large number of cultural relics getting excavated illegally and smuggled abroad," said He Shuzhong, the center's director. "Otherwise, where do all the relics on western markets come from?"

The trade prospers on a combination of greed and opportunity, and multiple channels make it nearly impossible to weed out. It is not uncommon for diplomats stationed in Beijing to be involved in smuggling Chinese antiques, according to the shopkeeper at the Panjiayuan market. "One of my friends, who works at the German embassy, has a brisk business in ancient objects," she said. "Customs never look into his luggage, because he's a diplomat."

The art trade network extends its branches to the large cities of Europe and North America, but it is rooted in some of China's most desperately poor rural communities. Farmers, who may not have enough money to feed their families, live on top of some of the world's richest archeological treasures, and many of them turn to illegal excavations to supplement their incomes. Like other shady activities in rural China, the digging is allowed to take place because overburdened officials have no time to eradicate it.

"Of course, it's something we care about as archeologists," said Wang Xu, a professor at Peking University's Department of Archeology. "If they steal everything, there's nothing left for us to do research on."

It is a disaster for China's legacy comparable in scale to the 1966-1976 Cultural Revolution, when young radicals smashed everything that reminded them of China's non-Communist past. "In the Cultural Revolution, objects were destroyed in museums and private homes. But what was buried in the ground was left unharmed," said Wang Yunxia, a law professor at Beijing's Renmin University. "At that time, art objects were destroyed for political reasons. Now it's for profit."

In the 1990s, illegal excavations assumed feverish proportions, and often local officials were taking the lead, organizing farmers into excavation bands charged with generating money for their communities. "If you want to strike it rich, go dig up a tomb," went a popular saying during this busy period.

With the arrival of the Internet, the cross-border art trade networks have become more sophisticated, causing even the rarest Chinese treasures to be only a mouse click away for rich collectors in New York or London. But it is still the local farmers who do the digging, and they are also the ones who get punished when occasionally things go wrong and authorities interfere.

"The vast majority of those who get sentenced and even executed for digging up old relics are farmers," said He of the Beijing non-governmental organization. "I feel sorry for them."

Chinese art object are not just taken fresh from the ground, but often also stolen from museums, forcing many to take special precautions. At the Shandong Museum in eastern Jinan city, millions of yuan (hundreds of thousands of dollars) have been spent on sophisticated burglar alarms and video cameras, and guards are on duty 24 hours a day.

"All provincial-level museums like ours have similar safety systems," said Wang Zihou, a researcher at the museum. "But smaller museums can't afford it."

Thefts from China's poorly equipped museums sometimes serve to fill the collections of museums abroad, according to He.

Four years ago, the Miho Museum near Kyoto in Japan was approached by Chinese authorities who claimed a Buddhist statue in its collections had been smuggled out of China by underground dealers. "Legally speaking, our museum had title to ownership," said Hajime Inagaki, a curator at the museum. "But considering the friendship between our two nations, we agreed with the Chinese side that we'll return the statue in 2007."

Such stories of long-lost treasures returning home are far and few between, according to He from the Beijing non-governmental group. He said a large number of museums around the world knowingly acquire Chinese relics that have either been stolen from local collections or dug up from the ground illegally. Although he is up against powerful interests and survives on volunteer work and donations, he is not ready to despair yet. "You should never say it's too late," he said. "Even if a person is extremely sick, you still try to save him, you don't just leave him alone."