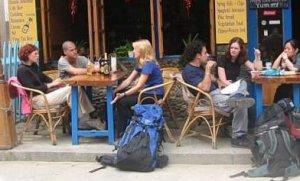 Backpackers take a break on the eve of war. 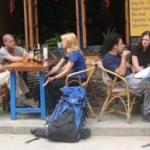 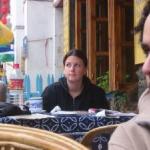 It's just past noon on a Wednesday at the Cloud Nine Café and Hotel in Guangxi province's Yangshuo, and the toothy mountains that ring the town are barely visible through the fog. As in many places along the backpacker trail, various hangouts form their own "national gravities", and the Cloud Nine is jokingly referred to as Yangshuo's Israeli Embassy, its chef's skill in recreating hummus and falafel makes the café a magnet for the bands of twenty-something Israelis doing their ritual post-National Service Asian tour.

Though becoming more upscale by the year, Yangshuo is still cheap enough to remain a popular stopover with the low-budget set, backpack-bearing adventurers trekking overland from spiritual reaches of the Himalayas to the hedonist beaches of Southeast Asia.

Owing to the weather - or perhaps the previous evening's revelries - most of Cloud Nine's patrons are just beginning to contemplate breakfast over their first cigarettes of the day. Life in general moves a bit slower in this town on the Li River, and as the day is overcast anyway, nobody has any serious plans for the afternoon outside of sitting around and swapping tales of the road over coffee, cigarettes and banana pancakes.

But in the early days of 2003, real-world unpleasantness is encroaching on the normally carefree backpacker lifestyle, and mingling with the usual backpacker chat - the price of guest houses here, the quality of hashish there - are conversations of a distinctly more somber nature. As tensions continue to mount around the globe, is any place in the developing world still safe for the budget slacker?

"I was in Bangkok when the Israeli government issued a general warning against traveling in Thailand, " says Eve, a fiery-haired young woman from Haifa. "That evening, I was walking towards a club in the city owned by an Israeli, and it occurred to me how vulnerable this building with the Star of David on the front was. Suddenly, I saw the club not as a place where I could go to meet others from my country, but as a potential target for terrorists. I couldn't go in."

Eve left Bangkok later that week, flying into Hong Kong to continue her travels in China. She is not alone. Across town, Jacqueline manages The Lizard Lounge, a club popular with rock climbers and - possibly because of the presence of a native Oz manager - Australians. "There've definitely been changes in where Aussies are going to because of politics and terrorism," she said. "Since the (Bali) bombing, I'm meeting a lot of fellas who're skipping Southeast Asia altogether and coming straight to China."

If the events of 9/11/01 woke the western world up to their vulnerability at home, then the Bali Bombings of 10/11/02 provided a rude awakening to the fact that even paradise can become a battlefield.

Even before the Bali bombing, 2002 was shaping up to be a bad year for tourism as local violence and international tensions kept westerners away from once-standard stops on the backpacker trail like the Philippines, Indonesia and Malaysia.

While Malaysia has reported a sharp upswing in travelers from the Middle East, and a trickle of adventure hungry westerners have gone to Afghanistan since the Taliban's fall, China is the only nation in Asia where those dependent on tourist revenue have anything to smile about.

China's tourist industry seems to be so far covered by the same Teflon umbrella that keeps its economy growing while those around it stagger under a prolonged global economic downturn. According to recent figures from the China National Tourist Office, China saw a 20% year-on-year increase in foreign visitors in 2002 and an 18% increase in American travelers alone. This last increase may not be a coincidence. as Americans find themselves less welcome in countries whose populations are increasingly coming out against the Bush administration's planned military actions against Iraq. China seems to be the exception, and was left off the long list of nations in the region where, according to a US State Department bulletin released on November 2, 2002, Americans should "remain vigilant."

"While it isn't really a problem in China, I don't generally advertise my American citizenship while traveling." says John from New York City. John's backpack prominently displays a Canadian flag; to the dismay of their northern neighbors, this practice, known as "donning the maple leaf," is becoming increasingly common.

Maple leaves aside, many parts of the world seem to be becoming increasingly tense for anyone perceived as being from the west, and as the perception of China as a safer alternative grows, more backpackers are choosing to do the bulk of their trekking in the Middle Kingdom.

Max, a Dutch traveler, says fallout from the ongoing war against terrorism and other simmering regional disputes truncated his original plans to trek overland from Amsterdam to Singapore considerably. "As a westerner traveling through Arab countries, I was all too aware how this?" he says, gesturing towards his curly blonde hair "might make me a target of anti-American sentiment, despite my not being American at all. So I decided to skip the Middle East portion of my journey."

Instead, Max flew straight into India. "Even there, I skipped some places after hearing tales from other travelers about an increase in crimes against westerners, and wound up heading to China sooner than I'd planned."

So are other country's lost tourist revenues China's gain? China has many attributes desired by backpackers. Despite the business class comforts of her major cities, (and the more touristy aspects of places like Yangshuo) much of China - from the high desert plateaus of the west to the jungles of the southeast - is still pretty rustic. Across China's expanses there remain plenty of places where the hordes Lonely Planet-packing travelers have yet to make an imprint. And best of all, China remains a bargain, even by S.E. Asian standards.

But of increasing importance these days, China, according to many backpackers, feels safe. Roadside passport checks and registration with the local PSB, which once evoked grumbles about China's lingering police state tendencies, now evoke a paradoxical sense of reassurance..

One Australian traveler summed it up thusly: "The Chinese keep a tight grip on things".

But after Bali, will backpackers ever be able to feel totally safe? Perhaps an excess of caution, like the spare roll of toilet paper, will become something not to be left home without.

You will not find any Cloud Nine Café in Yangshuo, "Cloud Nine" being a pseudonym suggested for use in this article by a long-term patron who felt that publicizing the town's Israeli enclave might attract "the wrong kind of attention."

"It's a shame, really, " he said. "I shouldn't have to think twice about publicizing to people in Hong Kong the name of the only place in Yangshuo where they can get decent Israeli food, but in these times...I'm just not comfortable with it."

Truth, its been said, is the first casualty of war. Perhaps then, however regrettable, the inevitable consequence of terrorism is an end to the relative innocence of life on the road. And until the world situation calms down somewhat, readers looking for Falafel in Yangshuo will just have to make their inquiries upon arrival.