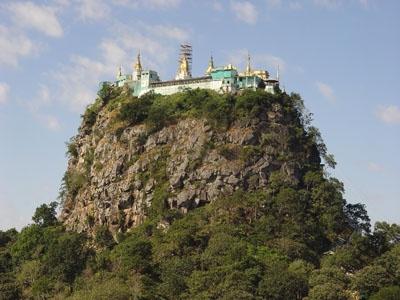 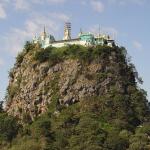 Mount Popa is a volcano in central Myanmar about 50 kilometers south-east of Bagan and rising over 1500 meters above sea level. The crater of the volcano is over a kilometer and a half in diameter. Scientists believe the volcano to be extinct, with the last known eruption, according to legend occurred in 442 BC. The mountain is best known for the neighboring Popa Taung Kalat monastery where statues of 37 spirits reside.

Scholars believe the name Popa could have been derived from the ancient Pali word popa, which means flower. The area is a haven for nature with trees, flowers, plants and other vegetation covering the mountain. However, the word Popa could also come from another Pali word. Pubba, which means east. This word could have been originally used to describe the mountain easterly location from Bagan.

Mount Popa is the residence of Myanmar’s most powerful spirits (nats), similar to Mount Olympus being the home of the gods in Greece. The nats themselves were once human beings who have died violently. Some of the nats include Thagya Min (considered king of the nats), Min Mahagiri (a son of a blacksmith who was strong and considered a threat to the throne and eventually burned alive), Mintara, the king of Innwa (who saw a fairy, went insane when the fairy disappeared and was murdered by one of his followers) and Shindaw (a young novice monk who died of a snakebite).

The site around Mount Popa consists of two attractions. One is the actual volcano itself which is Mount Popa (usually called Taung Ma-gyi locally) and the nearby Popa Taung Kalat hill, where the monastery for the nats reside.

Mount Popa and Popa Taung Kalat hill, are regularly visited by pilgrims who pay their respects to the 37 spirits. The main expidetions to the monastery occur twice a year, one in summer in accordance with the full moon of Nayon (either in May or June) and once more in winter during the Nadaw full moon (either in November or December).

Climbing up Taung Kalat will offer some incredible experiences. On your way to the top, you will meet some wild Macaques. If you happen to drop anything, the best advice is to let the monkeys keep it. They are quick and are relentless in getting what they want. After all, they are wild animals. Once you reach the top, be prepared to witness a scenic view of the land below.