Waiting for the Sun in Yangshuo 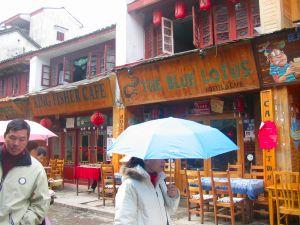 Still Waiting for the Sun on West Street 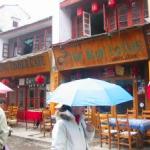 It's One PM on a cloudy Tuesday, and I'm sitting in the Green Lotus Café on picturesque West street in Yangshuo, Guanxi county. There's a chill in the air, but the front door is wide open, and brisk air rushes off the mountains and into the café, mixing with the smoke from my cigarette. Why create barriers between man and environment in a place this beautiful? I'm translating the lyrics to a song by 'The Doors' into something resembling poetic Chinese for the benefit of my waitress over a cup of tea, and there's no where else on earth I'd rather be. The Lizard King is crooning "Waiting for the Sun / Waiting for the Sun" , and I'm thinking that even if the sun doesn't show it's face at all, it's all right. My fourth day in Yangshuo, and even if it were five degrees lower I'd still keep the door open, and hang my head out like a bloody fool - I'm that glad to have left Beijing when I did, when the air was thick with a dirty fog you could have cut with a knife, and I almost had to just to see my way to the train station to board the train to that would take me closer to paradise.

I'd heard good things about Yangshuo, but I still wasn't prepared for what I found when I got here. Yangshou is in the same scenery belt as Guilin, a place that says "city of natural beauty" to the Chinese, as surely as "Aspen" does to Americans or "Venice" to Italians. To hear most of my Chinese friends talk about Yangshuo, I figured it to be kind of a satellite of the better known city, a side trip at best. But known for promoting a "hands on" appreciation of nature, Yangshuo deserves its own section in any travel guide. True enough, Guilin is a photographer's dream, and the roof of any hotel in the city offers 360 degrees of instant postcards for anyone with a camera and a taste for mountaintops. The view from the roof of Yangshuo's Sunshine Spa hotel was decidedly less remarkable, but this was understandable - the Sunshine Spa is practically built into the side of a mountain, and to see the top of that mountain from the roof, you need to look straight up, not out. And herein lies the difference - Guilin is a looker's paradise. But the beauty of Yangshou begs the traveler to get up close and personal, to become one with the scenery and get their hands dirty.

This hands-on approach is just one of the reasons that Yangshuo is becoming a popular destination for those who consider a day spent with clean hands to be a waste of time. Jutting from the earth like so many dragon's teeth, the hundreds of craggy hills and cliffs that surround and engulf the town prove a nigh-irresistible challenge to rock climbers, who flock to Yangshuo to become one with the mountain, to scale heights usually barred to bipeds, and otherwise mock gravity. The Lizard Lounge on Xianquin street is where the hardcore climbers hang out, so I stopped in for a chat about climbing with some of the folks in the bar . Earlier this year, the town played host to the International Adventure Race, during which scores of athletes, climbers, and assorted adrenalin junkies converged on this small mountain town. The meet was, according to those in the bar, a rousing success. "Everyone had fun, nobody got killed" was how one climber put it. Yangshuo offers opportunities for climbers of all levels, thanks to the efforts of the China Climb Club, who were instrumental in establishing the first established climbing route in town at Moon Hill. Since then, China climb has helped to lay nearly 100 routes around the area, and the club is always looking for climbers of all levels looking to climb with qualified, experienced guides - contact their website (www.chinaclimb.com) for more details.

For those to whom the idea of clinging to sheer rock while the ground looms many meters underfoot does not appeal, there are plenty of other opportunities to play the active tourist. Still waiting for the mercury to climb a few notches yesteday, I rented a decent full-suspension mountain bike and toured around the valleys and in between the dragon teeth hills. Barreling down a muddy gully, I was glad for the full suspension that dampened the bone jarring thud of wheel-on-rock into a bearable squishiness. I came upon a valley filled with rice paddies and fruit trees. Into the sides of the hills, terraces had been carved to add to the area's arable land, and on these terraces grew fruit trees and vegetables. Riding over the narrow dikes that separated the watery rice paddies required a good bit of balance, and I was again reminded of the benefits of a full suspension bike.

A bit later, I was carrying my bike up a steep flight of stone steps, and found myself in the backyard of a woman in colorful native dress. She was busy peeling some kind of large tuber, and didn't seem all that surprised to see me.

"Are you riding from Yangshuo?" she asked "Where are the rest of you?"

I told her that I was traveling alone, and she offered me a baked yam. Mrs. Zho, I found out, was a member of China's Zhuang minority, and originally came from somewhere closer to Guilin city. Noting the surrounding fields of produce, I asked her if she sold her rice and vegetables in town. "No," she told me "I just eat it myself, or trade with the neighbors. My husband has a job, so the money is enough." After a while, I made to leave, and she handed me another yam for the road.

Boat cruises on the Li river are another popular activity, but those more inclined to play it by ear can easily find a small sampan to take them down or across the river for a few RMB. On the North bank of the Li river sits the more built-up part of Yangshuo, the part with hotels, guest houses, and restaurants serving banana pancakes. To the south sits the older village, a place of narrow brick streets, where many of the people still make their living through fishing. While there's a bridge out past the west end of town, you can get a better feel for the river by hiring a sampan to take you across for about five RMB.

Of course, for those not inclined towards exploration, the temptation to not ever leave town can be strong. For those more inclined towards "inward exploration", a few weeks in Yangshuo can be equally edifying. The town is home to some excellent teachers in a variety of disciplines. Mr. Gao teaches Kung Fu out of his studio hidden down an alley off the North end of West Street, and accepts students on a short-and-long term basis. I tried a class one evening, and discovered yet again that I'm more the "Tai Chi" type. "It's OK," he told me "I teach that too, come back in the morning". Lessons in Calligraphy, Chinese Cooking, Massage, and of course, Chinese Language, are available at a few schools in town.

Finally, Yangshuo is a veritable Mecca for the shameless slacker. Scores of restaurants line West Street, the main tourist drag, most of which boast large screen televisions with DVDs galore. For the price of a beer or cup of coffee, you can sit on a wooden balcony that overlooks the mountains and watch films old and new, Chinese and western, good and awful. And of course, there's the matter of Banana Pancakes. With cheap accommodations, beautiful scenery, and an open environment that encourages the pursuit of knowledge, liberty and happiness in most of its myriad forms, Yangshuo is definitely becoming the must-see spot in China for those on the SE Asia backpacker circuit. This means that Yangshuo, in addition to offering a wide variety of opportunities for outdoor activities from the leisurely to the extreme, also offers culinary variety of the sort not found in most Chinese towns. Local specialties like fried snake and beer fish are served up alongside those which, while made from local ingredients, are definitely served to cater to the tastes of the strange lao wai who put the town on the tourist map.

It is this melding of east and west that allows your humble narrator to conclude this article over a plateful of banana pancakes and a cup of honeyed ginger tea, still waiting for the sun in the Green Lotus Café, Jim Morrison still wailing out of the café's speakers. Strange days indeed, Comrades, Strange days indeed.