Whither Laos, Idyll of Asia

The Idyll of Vang Vien, Laos. 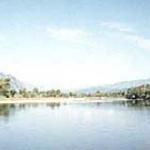 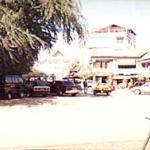 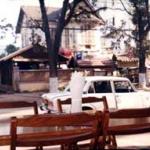 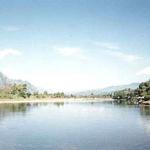 Arriving for the first time in Thailand, I was both elated and depressed by its modernization. Having spent six months in India, I had mistakenly generalized its poverty to all Asia. The Bangkok airport terminal was spotless, packed with fast-food chains and glittering boutiques. The city's notorious air seemed eminently breathable after Bombay's. The Chiang Mai airport likewise contained Dairy Queens and swank cappucino bars, and the road towards Samoeng was lined with convenience stores found in any Nowheresville, USA.

Casting about for a more idyllic Asia, I learned that Laos was the least modernized Southeast Asian country. Its communist, agrarian economy kept Laos relatively poor, but also relatively pristine. This was borne out by my trip to Laos last winter.

Laos and Thailand are linked at Nong Khai by the Friendship Bridge, which has come to represent the disparity between Thai and Lao development. Train tracks originating in Thailand run down the bridge's median, but stop halfway. Laos lacks the resources or initiative to complete their side. The disjunction is also an unsettling reminder of how eager Thailand is to exploit the resources of its northern cousin. The train, in India as elsewhere, is arguably the symbol of colonial designs.

The capital city of Vientiane, recently judged in a survey of Southeast Asian cities to have the worst quality of life, is hot and dusty in winter. The city sorely lacks trees to provide shade and keep the soil down. The Vientiane noon is an enervating glare; and shopkeepers wage an eternal war with the dust settling on their wares. Municipal trucks spray the streets daily, creating a thin carpet of mud.

Evidence of French colonial influence abounds. Paintings of the Eiffel Tower and the Arc de Triomphe grace the walls of hotels, and the French language is ubiquitous. Wine is plentiful, as are cheap baguettes, varied pastries, and excellent French dinners in lovely open-air cafes.

French and Marxist culture make for a strange marriage in Laos. Yellow and red hammer-and-sickle flags hang limp from government buildings. Gargantuan Soviet-made transport trucks grumble down the fractured roads. The hot water heater in my hotel room bears an ominously inscrutable Cyrillic tag. Recalling stories of Soviet televisions exploding without warning, I cringe as I turn the switch. The heater works, but the water can reach the top floor only sporadically. Somberly watching the drops slowly form on the showerhead, I listen to the pipes clank and groan below. It is an indelible lesson. For all of capitalism's evils, it seldom fails to provide a hot shower.

The hotel room is drab and artless. The towels are dimly colored, the walls cracked and rippled from rain and heat, and the ludicrously mismatched furniture is functional at best. If the shower worked, one needn't quibble about aesthetics; but even the spare "to each according to his needs" is a promise yet unfulfilled.

Basic commodities are scarce. The glass cases of roadside eateries - which in Thailand would be chock full of food - in Lao commonly contain a thin, solitary slab of pork. The currency - kip - is so worthless (US$1 ~ 8000 kip) that wallets bulge with it, when it is used at all. Prices at food stalls are written on affixed paper labels, changed frequently as the currency fluctuates. The Laotians are indifferent to American dollars, Thai baht, and kip; one can pay using all three at once.

Ironically, the New Economy of information has made inroads. Internet cafes are everywhere, and are usually the brightest spots on the block. One internet service provider bears the nigh oxymoronic name of laopdr.com - the 'pdr' standing for 'People's Democratic Republic'.

Laos is fairly unpolluted, due to low ownership of motorized vehicles and low electricity use. Vientiane is refreshingly quiet. One is disturbed by so little noise as the bells of the plentiful bicycles. The air, for all its dust, is quite clean; and one can sit on the banks of the Mekong River and see stars, rather than the dull orange glow found in so many Southeast Asian cities.

Vang Vien is also instructive in this regard. According to my four-years-old guidebook, Vang Vien then contained two noteworthy restaurants and hotels. Now it has a score. Some guesthouses are newly built; others are obviously residences converted to take advantage of the bourgeoning tourist traffic. While the locals benefit economically, the social benefits are not as clear. The girls working at one of the village's bakeries look discomfited by their new role in the service industry, as they try to keep up with the pace of the foreign customers' whims and speech. Children peddling opium, and prostitutes peddling themselves, see in fair skin a signal that quick cash may be in the offing.

For now, Vang Vien retains its splendor. Girls riding bicycles carry parasols to deflect the rays of the sun hanging over the lush, majestic limestone cliffs. Nude children perform backflips into the unspoiled waters of a pond just a kilometer's walk from the village center. Men steer long skiffs carrying vegetables to and fro. One cannot imagine a people more gentle and unassuming than the Thais, until one has encountered the Laotians.

Sitting in the pondside restaurant, I watch the slow movement of this Asia past, coming to grips with Asia's future, which rumbles around Laos like an army of querulous automobiles. I ask the ruminating water buffaloes, watching me indifferently from the turbid brown pool in which they wade: Is it better to go forward or back or neither? Is there a place for you in the world we envision? Should I encourage the movers-and-shakers of the world to see Laos, so that they might see what is lost through development? Or should I beseech them to stay away, lest they turn Laos into the nightmare that parts of Asia's cities have become?

The water buffaloes offer no answer. They only ruminate, like me.