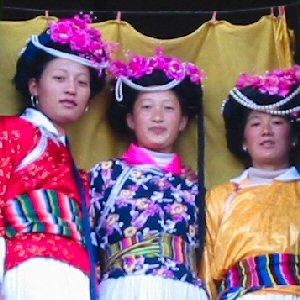 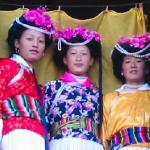 In a remote section of the Himalayas straddling Yunnan and Sichuan provinces lies Lugu Lake, a place so beautiful that many who make the six hour journey over the rough, winding road from Lijiang, (the nearest large city), feel they've entered paradise.

Surrounded on all sides by unspoiled, densely forested mountains, Lugu's azure waters are as pure and unpolluted as you're likely to find anywhere in the world's most populous country, 30 square miles of liquid indigo, broken only by a few small, lush islands dotted with Tibetan temples. So clean and remote from city lights are the skies above the lake that at night one can nearly read by starlight alone.

But what makes the area so particularly attractive (both to tourists and anthropologists) are it's people. Lugu is home to the Mosuo, the last purely matriarchal tribe left in China. Unlike the rest of China (and indeed, much of the world) where men rule the roost, in Mosuo society, women make most major decisions, control household finances, and pass their surnames onto the children. For this, and other reasons Lugu is known in China as The Kingdom of Women.

Perhaps the best known (and probably most titillating) aspect of Mosuo culture is their practice of walking marriage. In this form of poly-amoury, a women chooses her lovers freely from among the men of the tribe, inviting the one she fancies to spend the night with her in her home, leaving sometime after dawn. Theirs, according to all accounts, is a pure love, devoid of jealousy or duplicity, qualities greatly frowned down upon in Mosuo culture. Children born of these unions are raised semi-communally, and almost always in the mother's home. There is no word in the Mosuo language for "father" - the closest classification in Mosuo for a male parental figure might be translated as "uncle", and while a child will only have one mother, they might have several uncles.

A generation ago, few outsiders had heard of Lake Lugu or the Mosuo. But over the last ten years this once isolated paradise has become a magnet for travelers, both from in and outside of the Middle Kingdom. This is thanks in great part to the efforts of Lugu's most famous daughter, Yang Erche Namu, singer, model and author of several books widely credited as introducing Lake Lugu and the Mosuo to the outside world.

Tourism has brought great change to Lugu Lake. The lakeside town of Da Lou Shui (on the Yunnan shore) has taken on a kind of Disneyland feel, with visitors coming year round to gawk at the inhabitants of the Country of Women. While most are respectful, some are less so, and many Mosuo women report being propositioned by visitors who interpret their culture as one of random promiscuity. This reputation has encouraged Han Chinese entrepreneurs to buy land on the outskirts of town, setting up their own red light districts catering to visitors with such expectations.

For better or worse, tourism has wrought major change to everyday life in Lake Lugu. This is more apparent on the Yunnan side of the lake, whose inhabitants now boast one of the highest incomes per-capita in Yunnan province. On the Sichuan side, lack of roads and modern conveniences have slowed the pace of change considerably. Those who take the time to cross the lake might, if they are able to block out the sight of the occasional car or motorcycle plodding along the rutted road, and ignore the presence of mobile phones (ubiquitous now in all but China's most extreme far flung corners), might imagine themselves back in Lugu as it was in generations past. How long this illusion will last remains to be seen.