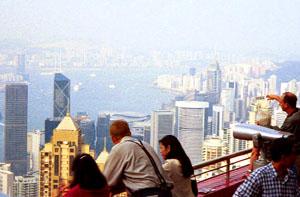 View of Hong Kong's Victoria Harbour, from the Peak. 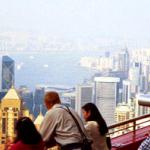 What am I doing in a Gucci shop? It's an accident, of course. Somehow, on my first full day in Hong Kong, I have wandered into a high-end mall. Hong Kong is like this. You'll be walking around, minding your own business, and suddenly you'll find yourself in a mall without even knowing how you got there.

You would think the Gucci people would have a bouncer at the door, but amazingly they let me walk right in. What are they thinking? After all, what if I break something? There's no way the credit limit on my Visa card could possibly cover the cost of anything I might knock over. I walk gingerly, even though this store is mostly full of clothes and leather products. There's nothing I really can break, but I'm still paranoid. Who knows what punishments they might think up with all that leather around?

I do find one thing I want to buy. There's a leather shaving kit for God-knows-how-much-money. I don't want the case, but inside it is a toothbrush engraved with the word "Gucci." That's all I want. A toothbrush. I think it's just a prop, but how cool would it be to have a Gucci toothbrush just sitting in your bathroom? Somehow, though, I don't quite have the courage to inquire about it. The stylish Gucci salespeople scare me.

I spend the rest of the day darting in and out of stores. I can't help myself. Shopping is such a fabric of this city that it's impossible not to shop. I find myself ecstatically walking through clothing shops, thrilled at all the bargains. Normally, I hate shopping, but here I'm a shopping fiend. Or maybe it's just that the weather is oppressively hot, and the shops are all air-conditioned.

Hong Kong is as much about fun as it is about shopping, and so that night I have drinks with my friend Linda in Lan Kwai Fong. Some of the best bars are located in this expatriate section of Hong Kong - including karaoke bars. We enter one, and I'm braced for horrendous singing. Luckily, it's not so bad. A live band plays popular songs, and just about everyone there sings. People occasionally get up on stage, but their voices are drowned out in all the drunken revelry. I revel some but not nearly enough to get up on stage. In fact, the amount of drunken revelry required to get me on stage in a karaoke bar would probably also send me into a coma.

"The one thing you have to do in Hong Kong is get a massage. You haven't lived until you've experienced a Hong Kong massage," he tells me. He then describes in detail the best place to get one. The others also have suggestions for me, but we keep coming back to massages. Every few minutes, he is waxing poetic about the Hong Kong massage.

Soon, he takes out his business card and writes his cell phone number on the back. "Whenever you want to go, just call me and I'll take you for a massage," he says.

"I'm free during the day all this week. Call me anytime," he adds helpfully.

Yes, I seem to have developed a new friend. Either that, or he just really likes Hong Kong massages. I never do find out.

The next day, Linda and I take a cable car to the top of Victoria's Peak, overlooking Hong Kong. The view is amazing. Hong Kong has some of the most distinctive skyscrapers in the world. My favorite is the Jardine House, full of circular windows that look like portholes. According to my Lonely Planet guide, this building of bankers is also known as the "House of a Thousand Orifices." As you can imagine, there's also a less polite name.

In a city so devoted to shopping, it's not surprising that there's a giant mall on the Peak. It's the type of spot you wish were empty, but instead it's full of restaurants and shops. You especially wish that they hadn't a built a tacky Ripley's Believe It or Not Museum up here, but sadly they did.

After lunch, I head back across the harbor to Kowloon for more shopping. I buy some shirts and then spend way too much money at HMV Music. I'm having a great time there until a very strange-looking older man startles me with a question. "Would you hold my hand?" he asks.

"Er, no, sorry." Damn, am I ever popular in this city? First, Hollywood actors and now strange-looking old Chinese men in HMV. Perhaps it's time to stop buying music, I think.

I head instead for the famous and crowded Temple Street night market in Kowloon. Originally called the "Men's Street" because it catered only to men, Temple Street now sells everything from ties to women's shoes to fake watches to pornography. Ironically, I even spot a pirated copy of Napster selling for about two dollars. In short, if it's cheap and shoddy, you'll probably find it here.

Strangely, here on the "Men's Street," there is also lingerie, as well as some dusty, unwrapped vibrators. At one spot, a camouflage thong with a zipper hangs over a table of Sony PlayStation games. It occurs to me that you don't often see combination lingerie/PlayStation shops, but in Hong Kong, you see everything.

After all this vice, I suppose it's fitting then that a woman on the street stops me on the way back to my hotel. "You need massage?' she asks abruptly.

"No, sorry, I only get massages with Hollywood movie stars," I tell her. Well, actually I don't. I just politely decline and saunter away to my lonely, massage-less hotel room.