Afghan tourist trade looks forward to a return to the past 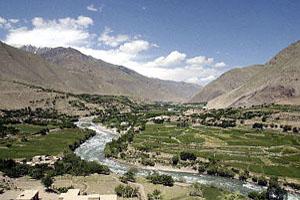 The Panjshir river winding through the valley of the same name in Afghanistan, some 170 kms from the capital Kabul. 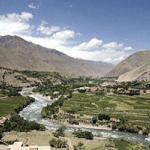 HERAT, Afghanistan, May 27, 2003 - Sitting in his Aladdin's cave of antiques and ancient weapons, next to the turquoise domes of Herat's Masjid-i-Jami mosque, Sultan Hamidy hopes for a return to the heady tourist days of the 1960s and 70s.

Hand-made blue glass goblets, vases and candlesticks lie piled in boxes gathering dust, while strings of lapis lazuli necklaces hang from the ceiling of his shop which optimistically targets tourists, one of a handful in the western oasis city. Shields, flintlock pistols and Victorian rifles from forgotten wars line the walls while samovars, coins and oil lamps are scattered haphazardly around the counters.

"These were made for princes," he says holding up a brass oil lamp, "ordinary people only had stone or pottery ones." Holding out an old coin, he boasts: "This is from Alexander the Great."

But the treasures on offer find few takers these days. The time of former king Zahir Shah and prime minister General Mohammad Daoud, who ousted the monarch in a 1973 coup, was good for business, Hamidy says. "At the time of Daoud, there were even 10-15 buses and 300 tourists a day," he says. "They were French, German, Japanese, Australian, Chinese, from every country."

Daoud was assassinated in 1978 and the following year Soviet forces invaded, effectively ending the tourist trade in a country which had been a firmly established stop on the hippy trail from Europe to India. Claiming he had even made "thousands of dollars a day" in the past, Hamidy said he was down to a daily profit of 80 dollars, not much when spread among his 18 surviving children, aged between 26 and 10. Two other children died, one was "killed by the communists" and another died in a rocket attack. Hamidy, who says he's "between 55 and 60," has seen a lot of ups and downs in his 45 years in business.

"Under the communists and Russians I was in and out of jail for 14 years and the shop was sometimes open and sometimes closed," says Hamidy. "There's no reason why I was arrested, they just say 'you're a mujahedin,' 'you're too active,' or 'you wander about at night too much' and that's enough," he says, touching his knees where he was given electric shocks by his jailers.

His shop was repeatedly looted. But the worst times were under the Taliban rule of 1996 to 2001. "If tourists came the Taliban would come in and pester them and tweak their ears."

Al Qaeda chief Osama bin Laden himself stayed in Herat in summer 2001, in a yellow octagonal guesthouse on a hill overlooking the city. It is now a government guesthouse and last week housed former president Burhanuddin Rabbani during his visit to the city. "At the time of the Taliban we could not display any musical instruments or statues, but as you can see today we can," he says, striking up tunes on a tamboor, a sitar-like stringed instrument. Under the Taliban virtually his only customers were the Red Cross and United Nations staff.

"Right now it's OK, some foreigners and tourists are coming and buying some things. Of course, even from three months ago it's better now." Herat is busy restoring its phalanx of ancient monuments, such as the magnificent Masjid-i-Jami mosque next door and its famous 15th century minarets, which it hopes will lure back the tourists and their much-needed dollars.

"If we can restore our heritage, lots of tourists will come which will help the Afghan economy and they will understand how civilised Afghans were in the past," says Mashad Wahidi, head of the province's historical monuments department. While optimistic for the future, Wahidy is not holding his breath for the return of the heady days of the 1970s. "It won't be repeated in my lifetime, but maybe in his," he said, pointing to his 10-year-old son.