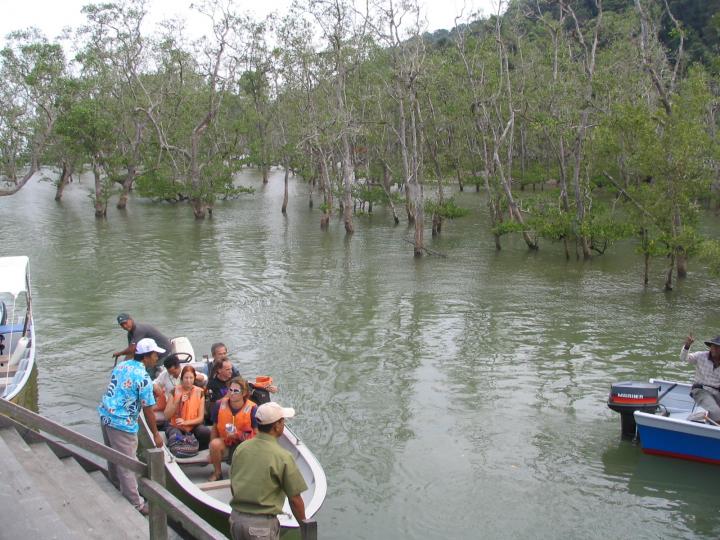 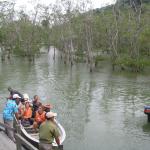 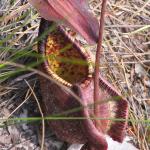 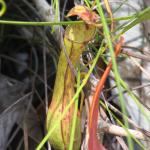 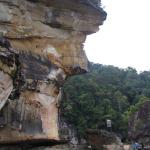 Bako National Park is accessible from Kuching.  It takes a 35-minute drive from the hotel to the pier at Bako Village for a 25-minute speed boat ride to the Park’s Head Quarter.  Established in 1957, Bako was Sarawak’s first national park.  It is a very small park (2742 hectares) but it has an exceptional variety of flora, and contains almost every type of vegetation in Borneo.  Situated on the beautiful Muara Tbas peninsula that is a former river delta trust above sea level, its sandstone cliffs are patterned and streaked with iron deposits and eroded to produce a dramatic coastline with secluded coves and beaches and rocky headlands.

Bako is one of the best places in Sarawak to see wildlife in a natural surrounding.  With my friend Ricky and the tour guide, we started the hike through the jungle trails that went up to and over the coastal hill at noon.  Following the trail Telok Pandan, we first hiked through the tropical lowland evergreen rainforests that are also known as mixed dipterocarp forests.  Here, there is a constant supply of water.  The climate in the rainforests is hot , humid and predictable.  Temperatures are between 22 to 34 degrees making the hike exhausting, especially with the steep climb up the elevation.  Inside the rainforests, the floor is wet and slippery and the trail’s floor is made up of debris collected between roots of giant tropical trees that reach about 30-50 metres above the ground.

We took a rest after an hour climb; we finally reached the top of the coastal hill where the vegetation changed dramatically.  The Heath Forests are common on the west coast of Borneo.  The soil is siliceous and acidic, most of the trees are short and closely packed together.  The sandy soil can usually be seen when the forest has been degraded.  Here, the sand remains wet and various carnivorous plants grow.

This habitat supports a variety of interesting plants, including parasites and ant plants, as well as Nepenthes and orchids.

The temperature in the degraded heath forest reached 40 degree at noon.  Humidity is still high as standing water is around much of the year.  Nepenthes can only tolerate this condition when protected by other larger plants.

Along the trail on the hill top, we found several species of Nepenthes.  Nepenthes rafflesiana has bulbous or rounded lower pitchers with two fringed wings.  Its upper pitchers are overall green with heavy black blotches.  The pitchers usually catch ants.  Nepenthes rafflesiana shares its habitat with Nepenthes gracilis, they can be found climbing onto dense secondary vegetation.  Nepenthes gracilis has more slender pitchers, usually green or red.  It is the most widespread and commonly encountered Nepenthes in the Sunda region.  The third type of Nepenthes I encountered is Nepenthes albomarginata.  We were going downhill following the stream running down gullies.  Here, on the side of a cliff that is permanently wet.  It is easily distinguished from those of other species by a band of white, velvet hairs just below the peristome of the pitchers.  Nepenthes albomarginata also climbs very well, sometimes covering small shrubs completely.

All Nepenthes species in Borneo is protected under the law.  It is illegal to collect wild specimens.  Its trade is regulated by the Convention on International Trade in Endangered Species of Wild Fauna and Flora (CITES).  Life plants can only be exported and imported with a CITES permit stating they are artificially propagated.

We made our move onto the beach Telok Pandan Besar, the water was clear and cool, we boarded the speed boat again which was there waiting for us and we went round the coastline viewing the sea stack.  Millions of years of erosion by the sea has resulted in the formation of wave cut platforms, “honeycomb” weathering, solution pans, arches and sea stacks.  However, Bako’s most distinctive feature is the westernmost headland--- Tanjung Sapi--- a 100 m high sandstone plateau which is unique in Borneo.

After lunch, Ricky and I went up the Tanjung Sapi trail which was the shortest but steepest trek to the top of Tanjung Sapi, overlooking Teluk Assam, which affords good views of Gunung Santubong, on the opposite peninsular, across Tajong Sipong, to the west.  The view up on the top was magnificent.  We met the two German girls who took the boat with us to the park.  They stayed up here for more than 3 hours.  Now they were making their way back.

It started to get windy, so we made our way down the forest.  When we were closed to the foothill, all of a sudden gusted of wind came through the rainforest and all the trees swayed.  It seemed like we were hit by a hurricane.  We ran down as fast as we could only to be greeted by the pouring rain and strong wind.  We took refuge under the roof of a beach hut but the wind got through on all sides and the thunderstorm was in full swing.

While we were waiting out the storm, we saw a little boat in the middle of the rough sea.  The boatman waved to the people on the beach.  I guessed it was the time the one-day-tour tourists to go back.  The two German girls ran out with their luggage in the pouring rain onto the beach and hurrying towards the edge of the water where the boat was trying to approach.  When they came close, all of a sudden, lightning struck near the boat onto the water, we heard the scream through the air and the German girls ran back to the chalet on the beach.  They got scared.

The tide was receding too.  So they waited half an hour for the storm to die down a bit in order to venture out again.  But by now the boat was in the next bay, so the tourists had to board the boat there, and got themselves ready for the rough journey.  After a whole night of rain, the next morning was bright and quiet.  The Bornean bearded pig was the largest mammal greeted us when we woke up.  It was snuffling around the chalets and the park headquarters.

We walked out under the steep cliffs and because it was low tide we ventured out onto the sand and walked onto the mangrove area.  The blue fiddler crab has one big claw, and is forever challenging others to fight.  A large number of them can be seen alongside the mudskippers, on the muddy area where the stream comes into contact with the sea.  The mangrove has the ability to hold its breath when it is high tide and until low tide, the mangrove has numerous roots that extended out of the mud surface around the main trunk to assist in getting sufficient air.  This common stilt-rotted mangrove species support numerous wildlife and birds in the Bako National Park.

From here, my journey came to an end and my next destination, Indonesia, will be the second part of the botanical tour.  I planned to visit Kebun Raya Bogor in Java and also the beautiful island of Bali.