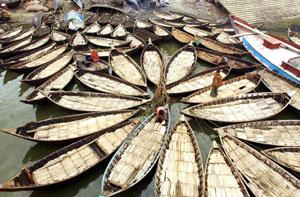 Boatmen make preparations on their vessels before setting out on the Buriganga river in Dhaka. 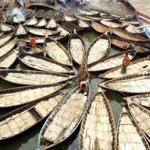 Dhaka, May 4, 2003 - A cruise on Bangladesh's historic Buriganga river used to be a must for visiting dignitaries but these days they are confronted with foul smells and rotting fish resulting from massive pollution. "This stench is unbelievable, you must do something about it," Dale Lautenbach, a senior visiting official of the World Bank, told AFP during a recent cruise on the river which flows through the capital Dhaka on its way to the Bay of Bengal. She and the other ferry passengers were forced to cover their noses as they looked in horror at the black water and floating fish that had choked to death.

Hundreds of years ago, the banks of the Buriganga were a prime location when the Mughals made Dhaka their capital in 1610. The house-turned-museum of the Nawab (ruler) overlooks the river, which is the country's main waterway for trading and ferry travel. It was once the main source of drinking water for Dhaka's residents and an hour downstream from the capital city the river is still crystal clear. But as it flows through the capital, waste from sewers and factories -- especially tanneries -- pour into it.

According to the Environment Department, up to 40,000 tonnes of tannery waste flows into the river daily along with sewage from Dhaka, a city of more than 10 million. Human waste is responsible for 60 percent of pollution in the river, followed by industrial waste at 30 percent. The rest is solid waste. "We all get skin disease after taking baths in the river, but we have no choice as this our home too," said Majnu, a worker at Sadarghat, one of "Bangladesh's main ferry terminals.

Illegal structures have sprung up along its banks, narrowing the river and adding to the dirt, while ferries spill oil into its waters. "It is a dying river and the situation will get worse unless steps are taken urgently," Naser Khan, general secretary of the Bangladesh Environment Campaign, a non-governmental organisation (NGO), told AFP. He said the situation would be even worse if it were not for the annual monsoons, which help to clear the river to some extent as the water flow increases after the heavy rains.

"It is a poisonous river now and dying, but if we could implement existing laws it would a go a long way to help the river survive," said environmentalist Philip Gain of the Society for Environment and Human Development NGO. "We have no choice but to save the river at any cost."

Khan said an urgent priority was to dredge the bed of the Buriganga as silt and rubbish, including polythene bags, have lessened its depth. Environmentalists also want tanneries to be moved away from the river and sewage to be diverted to treatment plants.

The Independent newspaper recently complained that the government was doing nothing to clean up the river. "The government's inaction is as incomprehensible as it is painful," it said in an editorial.

But Environment Minister Shahjahan Siraj insisted the government was committed to saving the Buriganga. "The government is doing everything possible to save the river and we have set up task forces with specific responsibilities to identify how to save the river," he told AFP. "Inshallah (God willing) we hope to restore the river to its original state this year," said Siraj, who banned the use of polythene bags soon after taking office in 2001.

Last month, the government adopted a plan to maintain the navigability and normal flow of Buriganga and remove all illegal structures on its banks. "At the meeting it was decided to ban brick kilns within 250 metres (825 feet) of the river bank, structures within 540 metres (1,782 feet), remove garbage and silt from the river bed and divert water from the Jamuna river to keep a good flow of the Buriganga year round," Siraj said.

"We have already decided to relocate tannery factories to other places." The government has also ordered concerned authorities to find alternative ways to dispose of sewage. Both Khan and Gain warned that unless the government implemented the plan quickly the river would be as good as dead in three years.