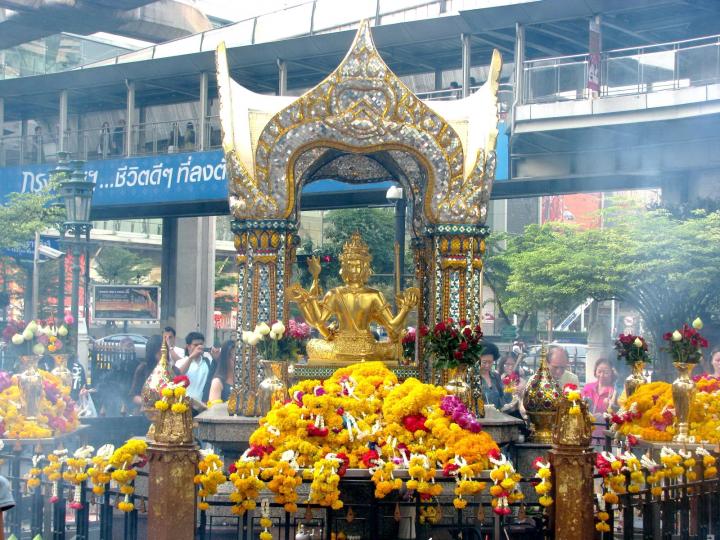 Statue of Phra Phrom, the Thai representation of the Hindu creation god Brahma, at Erawan Shrine 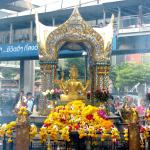 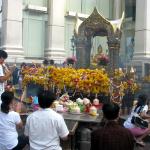 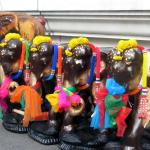 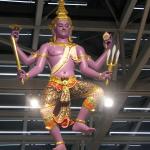 Say ‘Bangkok' and for many people who've been there images of its wild and raunchy nightlife would spring to mind. As Asia's night entertainment capital, the city lights up with excitement after sundown as huge crowds head for its major pleasure domes to indulge themselves after a hard day's work.

Remember that 1980s tune, "One Night in Bangkok"? Well, a night in the city simply isn't enough because of the numerous hedonistic pleasures that await night prowlers that couldn't be had in a single visit. From the usual to the unusual, from the subdued to the steamy, from the reserved to the risqué, Bangkok has it all. Thailand's capital boasts of several hotbeds of night time entertainment and recreation, each crawling with wall-to-wall clubs, bars, pubs and lounges scattered all over Khao San Road, Chidlom, Ploenchit, Sukhumvit, to name some.

Of course, there's the notorious Patpong, known for its back-to-back rows of neon-lit go-go bars featuring young, naked women - some of whom aren't exactly ‘women' in the strictest sense! - dancing on stage or performing all kinds of sexual treats with the delicate parts of their anatomy in exchange for cash.

This notion of Bangkok as the world's nightlife capital is hardly surprising considering that it's famous, or should I say infamous, for its red light districts where you can find the seediest go-go bars and sleaziest sex shows that could satisfy some carnal desires. What's maybe more surprising is that there's this spiritual side of the city that somehow takes the sting out of the stigma of its reputation as a breeding ground for AIDs and other STDs.

Krung Thep or "City of Angels" - that's how Thais call their city - may be in the running as sex capital of the world as far as its critics are concerned but it has, at the core of its being, a soul reflecting its deepest and truest nature, giving Bangkok a distinctive character as a city of contrasts. This, I found during my recent visit there. And it's a discovery I deem more bedazzling than its shimmering skyscrapers dotting the skyline or those heavenly bodies I saw in its sex strips.

Bangkok's nightlife may possibly be the most depraved in this part of the world but, ironically, its inhabitants are faithful followers of Buddhism. In a country where more than 90% of the population follow Buddha's teachings, I chanced upon not just one but quite a number of orange-robed monks all over town. Most of the houses and establishments there also have a small altar outside, where residents burn incense and pray to the house spirits.

Almost everywhere in the city, there's a shrine or a wat (temple) standing at every street corner. There are also quite a number of centuries-old monasteries and religious edifices where troubled souls can get some form of solace, making Bangkok one of the best places to be for those searching for spiritual nirvana and enlightenment.

Taking a ride aboard the tuk-tuk (motorized rickshaw), I went around town and saw many of these temples albeit from a distance. The more prominent wats are Wat Arun (Temple of Dawn), located in the west bank of the Chao Phraya River, with its striking prangs (pagodas) that are decorated with millions of pieces of Chinese porcelain, and Wat Benchamabophit (The Marble Temple), situated along Si Ayutthaya Road near Chitralada Palace, with its impressive canals and bridges.

There's also Wat Ratchabophit, found along Ratchabophit Road, with its Gothic-inspired temple hall and ceramics-decorated pagoda; and Wat Ratchanatdaram, found at the corner of Ratchadamnoen and Mahachai Roads, which is said to be the only one of its kind left in the world. Unfortunately, I missed the opportunity to explore the inner sanctums of these impressive wats since I was, for the most part, on an official trip that hardly had enough hours for sightseeing. What's worse, I left my camera at the hotel so I wasn't able to take pictures of even the facades of these revered temples!

Fortunately, there's a Buddhist monument near the hotel where I stayed, which I visited one late afternoon. Known as Erawan Shrine, the sacred place draws thousands of Buddha's followers from every corner of the world wanting to pay homage to its most important attraction - the four-headed image of Phra Phrom, the Thais' representation of Brahma, the Hindu God of Creation. Located near the Grand Hyatt Erawan Hotel along Ratchadamri Road, it was originally created as a spirit house to the hotel, deriving its name from Brahma's three-headed elephant.

Adjacent to the shrine is a light rail station where commuters boarded the trains that shuttled them to various destinations. It's also surrounded by several shopping malls, including Gaysorn, Central World and Amarin Plaza. Despite the noisy ambience, the shrine attracts hordes of worshippers, Thais and foreigners alike, praying there for blessings, fulfillment of dreams, successes in their personal and professional lives. Once their wishes are granted, devotees often engaged the services of the resident Thai traditional dancers.

Incense filled the air as I walked towards Phra Phrom, taking its photos from different angles. Amidst the chaotic and hazy atmosphere, several worshippers kneeled before the statue to pay homage through an act known as wai phra. First, they burned three sticks of incense: one for Buddha, one for his teachings, and one for the monk. Then, they lighted a candle, offered garlands of lotus or jasmine to the Enlightened One, and silently made their wishes. Later, they kneeled and then bowed three times before Phra Phrom, placing their palms down on the ground after each bow. It was my first glimpse at Thailand's religiosity and I found it a uniquely amazing experience.

As dusk started to engulf the place, I retraced my steps back to where I came from,  filled with satisfaction at having seen a slice of the city's soul right in the heart of downtown Bangkok. On the way back to the hotel, I found myself contemplating on the little discoveries I had about Thailand while roaming the streets of its capital. As I've expected, the city turned out to be densely populated, incredibly congested, annoyingly noisy, heavily polluted and yet I ended up falling in love with it because it's also amazingly sophisticated, culturally unique, and downright interesting.

So, is the City of Angels a Miltonic paradise or an Alighierian inferno? Damned if I know. One thing I'm certain of is this: Bangkok is one of those exuberant places here on earth where you can be laughing on the outside but languishing in the inside, or calm in one moment and chaotic in the next, or devout during the day and debauched from dusk till dawn. Call it bizarre but I guess it's this bundle of contradictions which you get to experience there that makes the city one-of-a-kind, fascinating, and irresistible.