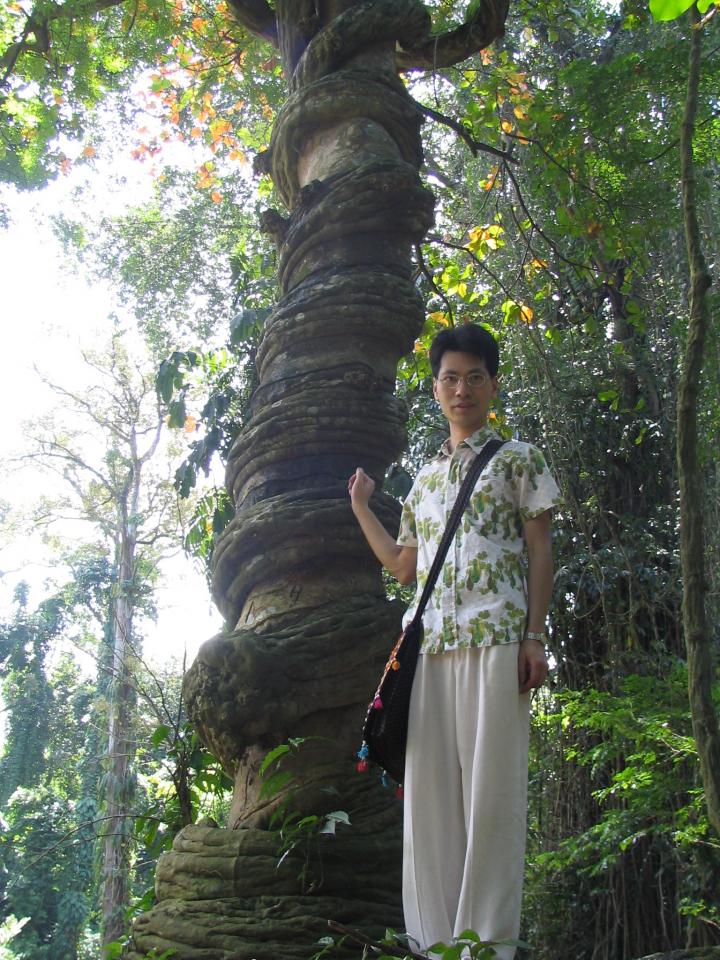 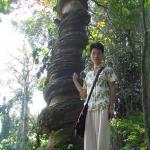 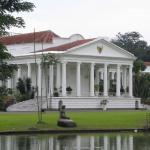 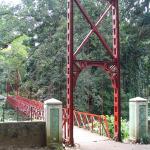 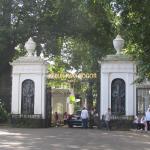 I was fascinated with this vine called Phytocrene macrophylla, and my search for information on this plants yield little.  I decided to go on a plane and to get to Bogor to check it out myself.  Of course, there were lots of obstacles to overcome including convincing my parents that I was not going to be mugged, robbed or kidnapped or even blow up in pieces in Indonesia.  Arranging the trip was not as easy, but luckily my botanical illustration teacher told me her experience in Bogor some 40 years ago and armed with a lonely planet guide book, I took a long flight from Vancouver via Tokyo and to Jakarta.

Bogor is one and a half hours away from the capital city Jakarta.  Take a taxi ride from the booking counters at the arrival hall.  Don’t let any strangers grab your luggage and take you on their vehicle.  They can mug, rob and kidnap you.  It is not a particular friendly world out there.

Hotel Salak, Bogor is situated next to the Bogor Botanical Garden.  It is the only top class hotel in town.  It was called the Hotel Bennenhoff founded in 1856 during the Dutch colonial era.  I think the English Botanical Artist Marianne North stayed here in 1876.

Marianne North mentioned it is only 15 minutes walk from the hotel to the entrance of the garden.  It took me twice as long.  It is not easy not to be distracted by the noise and traffic circling the road along the perimeter of the garden.  The green angkots (vans) all stops every two seconds to upload and download passengers and they honk at you to try to attract your attention to use their service.  Not many Indonesians will walk on the pavement; I am pretty much the only one.   They are all in and out of various angkots while the pavement is the place to sell vegetables, snacks and gasoline for motorbikes.

Buitenzorg (meaning ‘Without a Care’) was founded in 1817 by the Dutch and has been a centre for promotion of agriculture and horticultural science in Indonesia.

After paying the admission fee of less than a dollar, I went in to walk under the canopy of the avenue of tall trees.  Now called Kebun Raya Bogor, it is a 85-hectare garden delightful to be in for a few hours or even days and weeks.  I stopped by the information counter to the right of the entrance and talked to several staff there and they were all very curious of what I do and why I am here.

I bought books published by the garden.

“Four Guided Walks Bogor Botanic Garden” is available in Indonesian, Japanese, French, German and English.  It has detailed maps, self-guided trail suggestions, detailed plant descriptions and nice photographs along with the history of the garden.

If you come to the garden after breakfast like me, I suggest you take Walk Number One outlined in the book.  The walk covers the Canarium Avenue, and Lady Olivia Marianne Raffles monument.  Turn left in the direction of Teeub laboratory and guest house.  Walk across the lawn to the collection of Alocasia, Amorphophallus and Anthurium under a tall tree draped with the huge climber Alsomitra macrocarpa (XIB).  At the Amorphophallus enclosure, there is a gentleman selling photos of the biggest Inflorescent of the world, Amorphophallus titanium.  Although most of the time the few plants are either in leaf or dormant, there is always a chance that one of them will flower every 3 years.  When it is in bloom, it is like a huge purple green calla lily taller than a human and yes, it smells pretty bad to attract pollinating insects.

Across this enclosure, there is a sign for toilet.  I walked towards it and there were three guys waving at me.  “Mugged, robbed and kidnapped” flashes across my mind, so I detoured back onto the path and convinced myself I don’t have to use it.

Leaving the shaded area behind and continuing with the winding path, I saw a good collection of bamboos, some beautiful cannonball trees, Couroupita guianensis and the elephant creepers Entada phaseoloides (XVII A 114 Maluku, Ambon Island).  There are usually flying foxes (giant fruit bats) hanging on the tree if you direct your view to the top of the canopy.

The back of Istana Bogor is ahead with a lake in front.  This is the most scenic spot and the most quiet.

On the other hand if you take a right at the above monument of Lady Raffles, you will have to negotiate the hot and sunny Mexican garden first.  Even around 10am, it is already a bit unbearable.  I quickly walked down the steps to the red hanging bridge which is so photogenic.  The end of the walk is along the Kenari Street.  On the right of this street is the climbing plants collection where I spent the next 5 days researching, photographing and painting the plants there.  There are Aristolochia jackii (XVI C 167), Phytocrene macrophylla (XVI C 135), Dregea volubilis (XVI B 40), and mysterious Gnetum vines (XV A).  In particular, Phytocrene macrophylla is called the water vine with porous tissues that transport large amount of tasteless liquid drinkable in an emergency.  I painted this plant under observation of the curious Indonesians.

At around noon the sun is merciless.  The Victoria amazonica (Amazonian waterlilies) are glorious(XX G).  The flowers open white on the first day but will change to red the next.  The leaves sit on the water surface like giant round tables, strong enough to hold a baby.

Set on the small hill is Café de Daunan.  By this time if you haven’t got dizzy from the harsh sun, maybe the oncoming storm will persuade you to take shelter at the café.

Bogor is called the city of rain.  It rains 340 days out of a year (with an average rainfall of 3000 to 4000mm annually).  Usually between 1 to 2 pm.  When it rains, it pours.  It will be the best time to try the delightful Indonesian dishes.  My favourite is Ayam Goreng (fried chicken) with or without Nasi Goreng (Indonesian fried rice).  For an hour it rained, and I shared my chicken with a little cat there.  If the rain stops, then walk along the pergola of the café and you can see a huge climber Mucuna novoguineensis with vibrant red flowers deservedly called the Flame of Irian.

Spend the leisure afternoon in the Orchid House down the slope, in air conditioning!

After cooling off, continue with the bent of the road and ahead is Sudjana Kassan Park named after the first Indonesian curator.  There is another Mucuna novoguineensis there.  I was playing with another little cat there under the pergola and all of a sudden saw a sea of garbage at the end of the stone path I was on.  Is this the dumpster?  How could it be so much garbage left unattended to in such a beautiful botanical garden?

Turned back onto the main road, I followed the path next to the river.  In the old times, it is called Tjiliwoeng.  I walked against the direction of the current.  When water level is low, you can see villagers fishing there, but in the rainy season, water is dangerously high.  It brings flood to Jakarta.

Walking back, you can take the Kanari Road and on the left will be another climbing plant area.  The lianas, plants of Entada phaseoloides, are vigorous.  The local kids love to use them as swings.  They love playing “Tarzan” there.

Climbers with conspicuous flowers can be seen on both side of the road.  Paederia foetida (XVII C) has clusters of greenish yellow flowers.   Derris elegans has wisteria-like pink flowers.  Bauhinia species have tangled stems so tortured that they are given the name “Monkey’s ladders”.

On the other side of the river, various trees are planted.  Further down, there are palms, ferns and fruit trees and tropical shrubs.  A large area (II J, Q) is devoted to the water plants.  Cyrtosperma johnstonii has large arrow-shaped leaves on long stocks and beautiful arum-liked flowers.  The spade is purple on the outside and creamy within.  Lasia concinna, Montrichardia arborescens are nearby.  This area is best for the vista.

The rain was starting again, so I headed back to the hotel.  Halfway, I wanted to get some fruits from the traditional market.  Trying to cross the road in between the angkots was a pure adventure in itself.  Just when I finally got to the start of the market which has stalls on two sides of the alley, the ground was all muddy.  The angkots going in and out the alley made it worse.  It was starting to really pour.  I saw a stream of water along with floating garbage making my way from inside the market.  I backed off and ran across the road and jumped on to the pavement.  I guess it is flooding time!