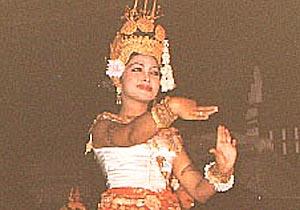 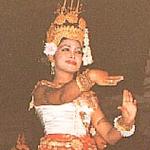 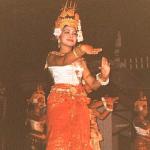 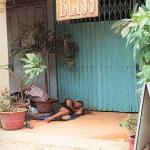 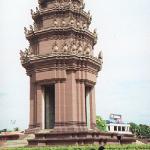 The airport in Siem Reap, Cambodia is clean and orderly. Still, one expects Asia's usual throng of drivers, barking their desperate, much-practiced questions: "You need driver?" "You want guesthouse?" In this respect, Siem Reap disappoints. In the parking lot, the drivers bunch behind a line painted a safe distance away. A guard pacing the line holds a high-tech electrified cattle prod.

Though one may know nothing of Cambodia's past, this first sight of Cambodia's present is instructive enough. Cambodia is trying to impose the stability necessary to draw the international investment it so desperately needs.

This need is perhaps most obvious in the deplorable condition of Cambodia's roads. Barring Burma, the only Southeast Asian country whose roads are comparable is Laos, not surprisingly: together, the two countries endured, as punishment for the misfortune of bordering on Vietnam, the largest bombardment in history.

The bombing began in Cambodia in 1969 with America's illegal "secret war". Americans dropped over 500,000 tons of bombs and killed over 100,000 civilians. Then came the civil war between the US-backed Cambodian republic and the Khmer Rouge (KR), ending with KR victory in 1975. Three years later, the Vietnamese invaded. In a depressing example of realpolitik, the US and Britain then began to fund the KR. This country of flooded rice paddies became flooded with contraband weapons. War persisted until 1991.

Between bombs, land mines, the KR's program of ruralization, and the breakdown of public services, Cambodia's roads were shattered. To fill the holes in the road leading to my guesthouse, someone had dumped a bunch of bricks and brick fragments into them. Vehicles throw up a thick dust, and the roads become mud rivers when the rains come. Another unsettling effect of Cambodia's recent history is the youth of the population. A group of teenage brothers seemed to run my guesthouse in Siem Reap. I didn't dare ask them where their parents were. The official figure for the number of Cambodians killed - by starvation, disease, and execution - during the KR regime of 1975-79 is 1.7 million, out of a total 1975 population of 7million. If the brothers had been born in 1975, at least one of them would now be dead.

Phnom Penh also teems with the young. In his 1997 handbook, Michael Buckley asserted that 45% of its people were under the age of 15. On the second floor balcony of my guesthouse, five or six boys sat looking idly down at the tumult on the street below; on the third floor were as many girls doing the same. The guesthouse was like a busy public school: kids running up and down stairs, shouting, teasing each other.

This preponderance of youth is cause for optimism. The preponderance of begging amputees is not. Their legs blown off by mines, or decayed by leprosy, they hover around all the spots frequented by tourists. A surprisingly large percentage of them have prosthetic limbs. Far more depressing, however, than the amputees is the tourists' ability to ignore them. An invisible wall stands between every $5-cheeseburger restaurant and the rattling tin cups outside. Previous travelers had warned me about the perils of broaching the past. One voluble American had asked his Cambodian barman, "So - what happened here?" The barman's face went blank and he said nothing. I found the opposite to be true. The "Kmeru," began my moto-driver, had caused a great deal of damage to Angkor Wat - ironic, given their identification with its "pure" Khmer architects. "They kill my people," he said, sadly. He claimed that the organization had been eradicated. This is debatable. Many former KR leaders live unpunished. Hun Sen, a defector from the KR, is now the country's Prime Minister.

Cambodia remains a pariah on the world stage. During my visit, much was made of a state visit by the second-highest-ranking leader of North Korea, that pariah par excellence. Huge portraits of him appeared alongside those of Sihanouk, Cambodia's reigning king. Banners strewn over the roadways read: "Long Live the Democratic Republic of Korea!" and "Long Live the Kingdom of Cambodia!" Young girls riding bicycles carried framed portraits of the dour Korean, who paid a visit to Angkor Wat just a few hours before I did.

But while Cambodia befriends America's enemies, it also befriends America's dollars, Cambodia's de facto currency. The Cambodian riel, like Lao's kip and Indonesia's rupiah, is doomed. One dollar is 3900 riel, and the currency's smaller denominations usually feel like tissue paper and look like crud. In Siem Reap, greenbacks reign.

Visiting Cambodia, however, is not cheap. The infrastructure remains in such disarray that basic commodities are dear, when available at all. Petrol is almost twice as expensive in Cambodia as in Thailand, from which many of Cambodia's products are imported. Electricity likewise: one of Siem Reap's most luxurious souvenir shops turns its lights on when you - the only customer - walk in; they go off the instant you leave. Restaurateurs apologize profusely for lacking the foods their menus advertise: rice soup, chicken, pork chops, even bread. Bowing with hands pressed together to show their embarrassment, they say, "That is finished" or "We don't have." Most restaurants in Siem Reap are empty. Their workers are surprised and delighted when you walk in.

Siem Reap is also expensive because tourism plays such an enormous role in its economy. Everyone seems determined to take advantage of the rare peace and stability since the last coup in 1997, by getting their hands on as much foreign exchange as they can. The fee for a one-month visa to Cambodia is $20; flying out requires an additional $20; flying within costs $4 per departure. Admission to Angkor Wat varies the theme: $20 buys one day, $40 two to three. Meals that cost about $.50 in Thailand can cost $2 here. Motorcycle rentals in Thailand are about $3/day; in Cambodia the price doubles. Cheap accommodation can be found -- $3-$4 for a fan room in a guesthouse - but Cambodia defies shoestring budgets.

For now, travelers should count themselves lucky to be able to visit Cambodia at all. It has known almost nothing but war for thirty years. The world knows little about it except this. Travel in the kingdom can still be risky: only last month, two Phnom Penh hotels were bombed; theft remains a problem; aspiring politicians are shot dead with AK-47s; and you can reportedly buy hand grenades for $5 on the street. (AK-47s are a little more expensive).

But the recent flowering of interest in Angkor Wat has stirred Cambodia's self-confidence. The country is on the move. Everywhere new hotels are going up; hammering and the whine of power tools wakes you up in the morning; Route 6 linking Siem Reap to Phnom Penh is being rebuilt with the help of the Japanese. A lot of people are expecting this place, which for so long has known only the boom of mortar shells, to boom economically. The Stone Age to which Cambodia was unconscionably reduced -- beginning with that first hateful B-52 dropping its payload in 1969, and the thousands that followed it -- may finally be nearing its end.