The Charming Monks of Laos 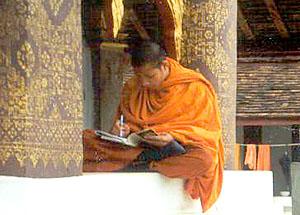 A monk at Luang Prabang's Wat Saen bundles up on a cold February day. 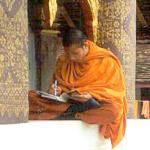 Visitors to Luang Prabang are usually struck by the serene, tranquil nature of this idyllic Laos town. Luang Prabang is so small and compact in fact, that it's almost absurd to even call it a city. Occupying a narrow peninsula of land between the Mekong and Khan Rivers, the town is a lovely place to talk a leisurely walk and soak up the peaceful atmosphere that surrounds you. No cough-inducing bus fumes, traffic jams or the unsightly presence of fast food franchises to ruin the landscape, just lots of lovely French style architecture and tons of monks.

Yes, the thing that strikes many visitors to Luang Prabang, besides the beauty and solitude of the place, is the incredible number of Buddhist monks walking around. Dressed in those trademark saffron robes, you'll easily spot them walking in pairs, usually with an umbrella in hand to ward off either sunrays or raindrops. In the early morning hours, when they make their daily alms rounds through town, it seems as if a wave of orange is flowing down the streets.

Unlike their shy Thai colleagues, Lao monks are very friendly and approachable. Pay a visit to any temple in town and it's highly likely that a polite young monk - or group of them - will initiate a conversation with you. Most of these curious, conservational monks are of the novice variety, that is, they are usually teenagers still in school and not yet full-fledged men of the cloth. Many of the novice monks come from poor villages throughout Laos to live and study at one of the twenty-odd temples scattered around Luang Prabang. Obviously, being Buddhist monks, they are focused on learning about the teachings of the Lord Buddha, but novices also study a variety of academic subjects and languages such as Pali, French and English. Many of them can also speak Thai, a language that is quite similar to their native Lao. Those monks that want to pursue their education at a university must relocate to the capital of Vientiane and do so at one of the larger temples located there.

Luang Prabang's most famous temple is Wat Xiang Thong, a delightful complex that was built in 1560 by King Setthathilat. More than just an old, decaying relic of the past, Wat Xiang Thong is an active monastery that features attractive pavilions, stupas, gardens, a Buddha Head shrine and a shed that houses several ornate long boats. On the north side of the building that holds the temple's sacred Buddha image is a decorative silver elephant's head that doubles as a drain for the temple's water pipes. Another visual highlight is a pink-walled pavilion, its exterior splashed with colorful tiles and folk paintings. No matter which part of the temple grounds you're admiring, one of the monks will most likely take it upon themselves to explain the history of the temple and answer any questions that you have.

During the annual water festival in April that is held to celebrate the Buddhist New Year (called 'Phi Mai Lao'), many of the young monks get caught up in the spirit of the holiday and playfully sprinkle water on the backs of visiting tourists. They might also insist on tying a string, called a 'basi,' around your wrist while they chant a blessing or two. Whether in Luang Prabang, Vientiane or a small village, it is also common practice during the festival for monks to build giant sand castles, mini-stupas actually, on the grounds of each temple. Townsfolk make reverential processions to their local temple and 'bathe' the Buddha images by pouring a cup of water over them or by brushing them gently with scented water and flower petals. Like in neighboring Thailand, the somber religious practices eventually leads to a bit of manic water throwing in the streets. But don't expect to see any of the monks joining the fray. No, that wouldn't be proper. Instead, you'll notice them curiously watching from a safe distance with bemused smiles on their faces.

There are many beautiful natural attractions to see in Laos, everything from mysterious caves and pristine waterfalls to craggy mountains and raging rivers. Perhaps the 'attractions' that sticks in most people's mind the longest though, are those charming monks in the saffron robes.