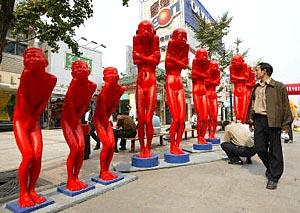 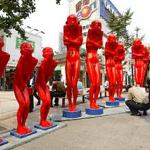 Chinese collectors' interest in the country's own contemporary art is so limited that it sometimes takes a foreigner to trigger awareness.

New York-based art adviser Howard Farber discovered that two years ago when he flew to Beijing to speak to local journalists about China's bustling avant-garde scene. "I was thinking, here's a New Yorker trying to promote contemporary Chinese art to the Chinese," he said. "I had the feeling there was only a handful of local collectors."

Private wealth is expanding rapidly in China on the back of market economic reforms, but conspicuous consumption has yet to target contemporary local art. Major galleries in Beijing say the vast majority of their customers are expatriates or foreign businesspeople passing through, while local clients account for only about one percent of sales.

"There are probably 10 I can think of (in all of China) that are serious collectors," said Karen Smith, a Beijing-based art critic. Most Chinese are simply not ready yet for the strange new works that emerge from China's growing number of art studios.

Unfocused photos of everyday objects or fat nudes in stark colors is not the kind of art that China's growing middle class will want to hang in their homes, and it is just as unlikely to adorn the headquarters of local companies. China's contemporary art scene is a belated victim of China's experience with totalitarian government, which promoted only one-dimensional social realism and ignored or oppressed all other arts forms.

Lu Jie, a 39-year-old curator, is witnessing what he considers a new golden age for Chinese culture unfold in east Beijing's Dashanzi Art District, and he is painfully aware that it is mostly not fueled by Chinese money. "It will take a long time," he said. "Contemporary Chinese art is not mature enough to generate our own market."

But even in China, awareness of contemporary art is growing, and will be helped by this week's biennale in Beijing, which will feature hundreds of works of foreign and Chinese modern art. Events like this, coupled with the opening of new museums and galleries and a more attentive press, will eventually lead to a rise of local art buying from its current tiny base, observers said.

"For the Chinese people to go from having no exposure, to suddenly being enlightened enough to collect very avant-garde works is a little bit of a stretch," said Smith, the art critic. "There's a lot of goodwill here, there's a lot of interest, but I think it will take time to mature, where people will be confident about spending what today are quite large sums of money on works by leading Chinese artists."

The corporate sector is a major source of funding for contemporary art in some countries, but not in China, and it will probably not become a significant force in the foreseeable future. "I can't see that coming, not in a long time," said Brian Wallace, director of Red Gate Gallery in Beijing.

One of the reasons why local companies rather turn to classical scroll paintings is the absence of a deep market for contemporary art that could provide for transparent market values for individual works. Without it, it is difficult for companies to justify the use of hard-earned profits on art that may not be worth what they pay for it.

Despite the lack of local money pouring into the contemporary art market, people in the business are upbeat about the future, foreseeing the number of local collectors rising 100-fold over the next decade. "Chinese contemporary art is on a slow boil, which I would rather see than something that is a flash in the pan," said Farber.

And the Chinese may be more receptive to new influences than is widely believed, said Lu, the curator. "China is the most conservative society in the world, yet at the same time the most avant-garde society too," he said. "I've never seen any cultural movement as radical as the Cultural Revolution, and I've never seen a revolution happen as suddenly as the Communist revolution in the 1940s," he said.