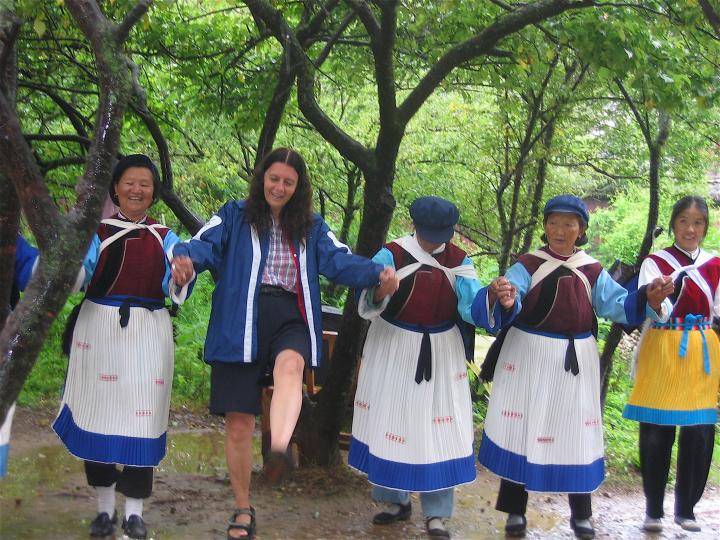 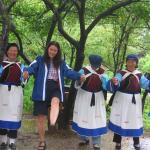 Let’s dance! I had many opportunities to dance on our trip to Yunnan province in China. Yunnan is home to at least a dozen different Chinese minority groups. Each has its own distinctive music and dance traditions. These minority groups have not always had a chance in the past to share their unique cultures with the rest of their countrymen and women. Now an ever growing Chinese middle class have the financial ability and political freedom to travel across their great nation and experience first hand its rich and varied cultural heritage.

Mao Zedong encouraged cultural homogenization during his reign. He forced everyone, for example to wear the Communist garb, the blue peasant hat and jacket. Now that China is moving towards more independence for individuals, minority groups can express their unique identities both in the way they dress and the way they celebrate their artistic culture.

Yunnan’s minority groups include the Yi, Naxi, Bai, Miao, Tibetan and Han people. We toured the various villages where they make their homes and in some of these communities the women invited visitors to try their hand at local dance routines.

I had my most incredible dance experience in the city of Shangri-La, site of James Hilton’s novel Lost Horizon. Many different cultural groups live in Shangri-La and one evening they held a dance altogether in the village square. I wrote this poem to describe that night.

Replete from a supper of yak soup, yak cheese and yak butter tea

I follow the Tibetan music to the village square at dusk

Chinese vacationers from Shanghai, Beijing, Hong Kong- every corner of this vast nation

All holding hands and moving gracefully to the music

Arms circling high in the air

Waists bending low to the ground

Feet stepping, crossing on the cobblestones

I watch in wonder, a misty-eyed, white-faced foreigner

Marveling how in this place where Hilton set his Lost Horizon

During years of war, revolution and oppression it was impossible for them to even dream of such a gathering

The shy, inviting smile of a wrinkle-faced woman draws me into the circle

I am included and patiently taught until I too can follow the rhythm and pattern of their ancient dance.