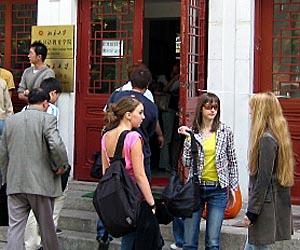 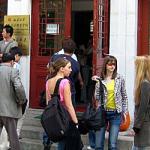 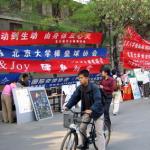 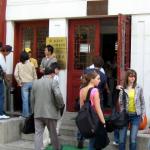 China is expecting a record number of students to enrol in its universities this year as foreigners seek to cash in on the country's booming economy by becoming proficient in Mandarin.

Of the anticipated 86,000 foreign students, an overwhelming number will come from Asian countries with close economic, trade and cultural ties with Beijing.

The major influx of students is largely pushed by China's phenomenal growth, but also reflects the nation's place as a cultural and historic center of Asia, says Chen Yinghui, director of the international students division of the Ministry of Education.

"The growth of foreign students to China is very much linked to China's opening and reform, but many students are coming to study Chinese arts, history, medicine and agricultural sciences," Chen told AFP.

"Overall we have seen steady growth in enrollment since the early 1990s and we expect the trend to continue up through 2008."

The growing numbers have resulted in difficulties in finding housing and classrooms for all the students, with several universities this year placing students in hotels due to a lack of dormitory space.

Yet the government hopes to have 120,000 foreign students in China by the time Beijing hosts the 2008 Olympics, with the bulk of these based in the capital, Chen said. The increase is aggressive given that only 20 years ago less than 8,000 foreigners studied in China.

The feeling that understanding the Chinese language will be an asset in the job market is believed to be driving much of the interest.

"In Indonesia, there are a lot of Chinese, so if you can speak Chinese then it is easier to get a job," said Prawibo Yohan Daniswara, an ethnic Chinese student from Indonesia studying at Beijing Languages University.

"When I get back home, I'm still not sure what kind of job I'll get but for sure if you speak Chinese there will be a lot more opportunities."

"I'm studying Chinese because China is such a close neighbor to South Korea," said An Sun-Yong, a South Korean student studying at the same institution.

"I'm not so sure it will help me get a job because so many South Korean students are studying Chinese now."

Beijing, with some of China's best universities, remains the choice locale for most foreign students, who are increasingly seeking to study in degree programs with other Chinese students rather than enrolling only in language courses.

"Most of the foreign students at Beida (Beijing University) study in our regular degree courses," said Wang Yong, director of the institution's relations.

"But these students are mostly South Korean, Japanese and other Asian students."

Beida has an expected enrollment of some 4,000 international students this year but only 1,800 students are full-timers enrolled for the entire academic year. Of these, about 1,400 study in the regular university and the rest are in language courses, Wang said.

"Business is the main reason I think a lot of students come here," said Min Song, a Korean-American business major studying with a University of California (UC) group at Beijing University.

"But a lot of the UC students are Chinese-Americans who have come here mainly because their parents want them to, so they're still not sure what they want to do when they graduate."

The vast majority of foreigners study in Beijing, followed by Shanghai and Tianjin.

Although the final numbers are still being tabulated, more than 60,000 of the total number of foreign students come from Asian countries, with South Korea sending as many as 35,000, Japan some 16,000 and the rest coming from neighboring Southeast Asian nations, the ministry's Chen said.

Some 7,000 students come from the United States and more than 6,000 from Europe.

Such numbers pale in comparison to the 580,000 non-Americans that annually study in the United States, but the increase in foreigners here represents a new growth area for Chinese universities, not only economically, but also as a source of cultural and academic exchanges, Chen said.

"In the United States, they look at overseas study as big business with foreign students bringing in some 13 billion dollars to the economy annually, she said.

"In China we still don't calculate things like that. Our priority is the education of the Chinese students, next we hope to create a lively and cosmopolitan cultural environment for them.

"Foreign students add to the economy that's clear, but so far we don't have an overall estimate."